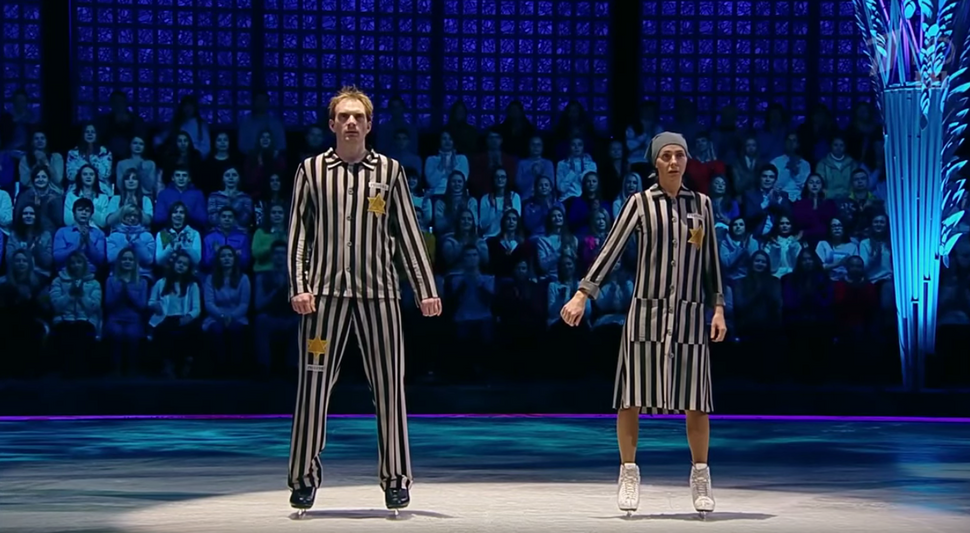 A Russian state-owned television channel aired a figure-skating performance featuring the wife of a senior Kremlin spokesperson wearing the uniform of a Jewish concentration camp inmate.

Russia-1 on Saturday showed the performance by actor Andrey Burkovsky and Tatiana Navka, a professional figure skater who is married to Dmitry Peskov, a spokesperson of Russian President Vladimir Putin.

They were wearing striped pajamas and a yellow patch in the shape of Star of David and dancing to the sound of “Life is Beautiful” by the Israeli singer Achinoam Nini, which was also used by the Italian-language film production of the same title about the Holocaust.

Throughout the four-minute performance, Navka and Burkovsky frolic and play cheerfully with an imaginary infant in a manner that seems incompatible with their attire. Then, near the end of the routine, a bright light shines on them.

Burkovsky signals to her that he has to go and gestures for her to take care of the imaginary child before he walks into the light. A loud bang is heard and the stage goes dark but for Navka’s face as she closes her eyes and clutches the imaginary infant with her back turned to Burkovsky.

The unusual performance prompted a debate on social media, with some comments calling the performance grotesque and disrespectful of the memory of Holocaust victims and others praising it as a remarkable work of art celebrating optimism even in the most desperate of situations.