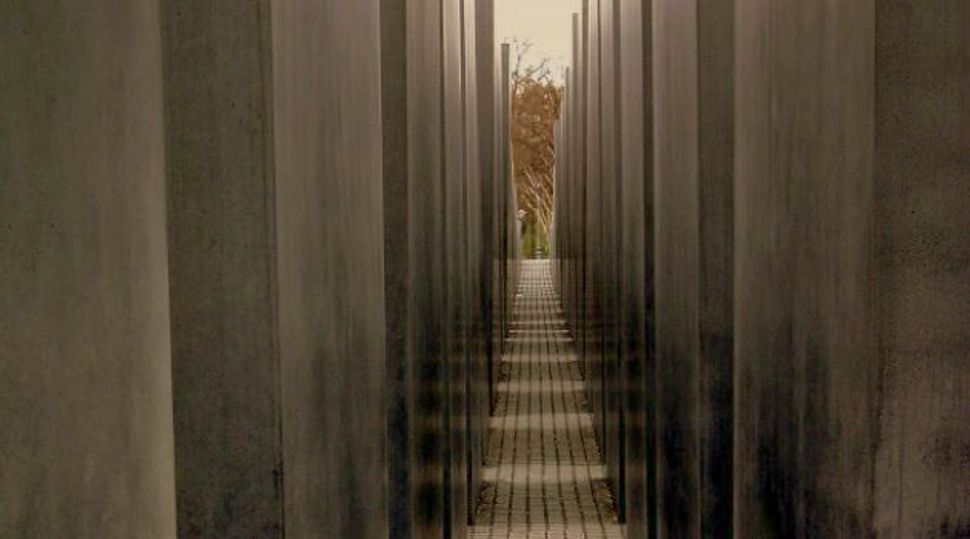 Strangers in Germany: The Jewish Memorial in Berlin as seen in 2012. Image by Wikimedia Commons

BERLIN — The firing of the director of the Polish Cultural Institute in Berlin has led to a diplomatic brouhaha in the German capital after some assert that she focused too much on Jewish topics.

The Jewish Museum also has become involved in defense of Katarzyna Wielga-Skolimowska, who was let go last week by the Polish Foreign Ministry, ostensibly because she focused too much on Jewish topics – a charge that the Polish Embassy is vigorously denying.

German media reports emphasized the fact that Polish Ambassador to Germany Andrzej Przyłębski recently criticized the Polish Cultural Institute in a private memo for, among other things, spending more time on Jewish-Polish themes than on Polish-Ukrainian or Polish-Lithuanian dialogue.

The Polish Embassy has now written to two German newspapers, the Berliner Zeitung and the tageszeitung, demanding a public correction of the facts and a response.

“To link the decision to recall our colleague Katarzyna Wielga with the assertion that it was due to ‘closeness to Jewish themes’ is not only misleading and wrong, but particularly irritating,” read part of the letter from Embassy Press Attache Jacek Biegala.

Wielga-Skolimowska is barred from speaking to the press while still employed by the Foreign Ministry. But others have come out in her defense. Notably, the Jewish Museum has asked Ambassador Przyłębski to rescind the decision to fire Wielga-Skolimowska, whom Museum Deputy Director Cilly Kugelmann called an “excellent representative” of Poland.

At the bottom of the issue, observers say, is an ideological split in Poland itself between the nationalist conservatives in power, and those who take a more self-critical view of modern Polish history. Reportedly, Wielga-Skolimowska was of the latter persuasion, and the powers that be wanted to have someone in place who would be more willing to promote Polish nationalist views.

Berlin’s left-leaning tageszeitung, or taz, newspaper, which broke the story, suggested the decision to fire her followed complaints earlier this year from Poland’s conservative minister of culture, Piotr Gliński, who allegedly referred to a “culture of shame” over the Holocaust that the institute in Berlin, among others, was promoting.

Not long afterward, in spring, Warsaw appointed Małgorzata Bochwic-Ivanovska as deputy director of the Berlin office, setting up a rivalry with Wielga-Skolimowska, whose contract was due to expire next summer.

Bochwic-Ivanovska reportedly was asked by the Polish ambassador to organize the German premiere of the Polish film “Smolensk“ this spring. Reportedly, no Berlin cinema was willing to host the film, which mixes fact and fiction in retelling the story of the plane crash in 2010 that killed a large number of Poland’s national conservative political elite, including President Lech Kaczynski. The film promotes a conspiracy theory blaming Russia for the crash, and was roundly rejected by German critics, one of whom even suggested it should get an award for “worst film.”

Instead, Wielga-Skolimowska screened the 2015 Academy Award-winning film “Ida,” which tells the story of a Polish woman about to take vows as a nun when she learns that she is Jewish, and that her parents were murdered by Polish neighbors.

In October, the Polish Ambassador wrote an internal review of the Berlin office, in which he advised the institute “not to overdo the emphasis – particularly in Germany, which should not receive the role of mediator – on the
importance of Polish-Jewish dialogue as the main example of intercultural dialogue which takes place in Poland. This dialogue is already very advanced …and there is little in it that is new.”

He wrote that Polish-Ukrainian dialogue or Polish-Lithuanian dialogue should take precedence, “for reasons I do not need to say here.”

The taz reported that 13 out of 24 directors of Polish Cultural Institutes worldwide had been let go this summer, and suggested that at least some of the dismissals were politically motivated.

In the Jewish Museum’s letter to Przyłębski, signed by several prominent directors of museums, memorials, the Jewish Film Festival and other cultural venues in the German capital, Kugelmann praised Wielga-Skolimowska’s work as a cultural ambassador. She asked Przyłębski to reconsider the “sudden decision, which is inconceivable to us.”

The museum’s letter does not refer to any possible reasons for Wielga-Skolimowska’s firing – none have officially been given. The letter was also copied to the Polish Foreign Ministry.

The Polish Embassy’s press spokesperson in Berlin told JTA via e-mail that the accusations reported in German media “seem to be a huge mistake and misuse of facts… We strongly reject linking [the] dismissal with a focus on Polish-Jewish topics,” which continue to be “important in our cultural activity.”