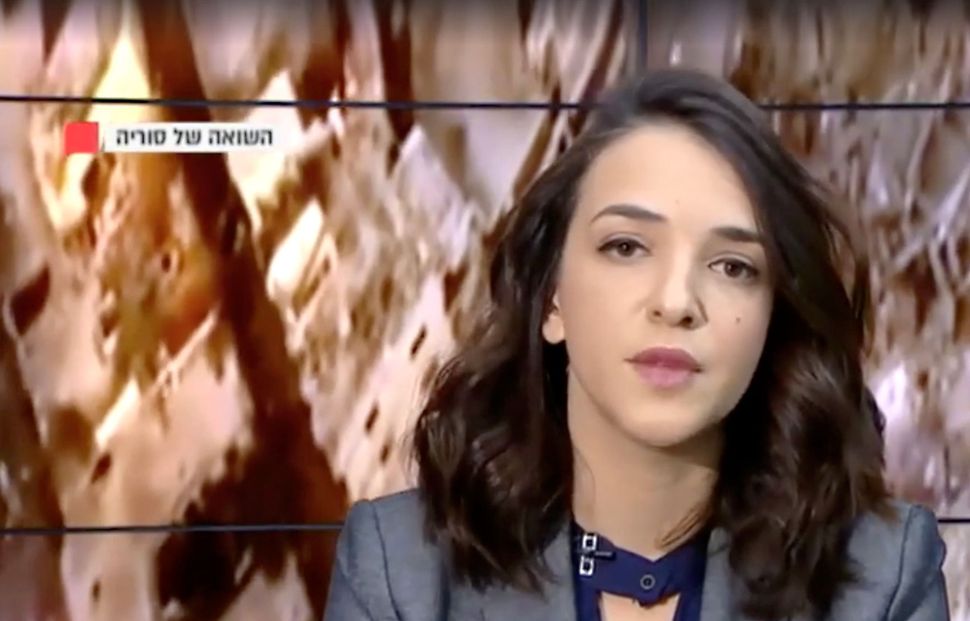 As bombs continue to fall on Aleppo, Syria’s ravaged metropolis, Israeli newscaster Lucy Aharish switched from Hebrew to English to direct a damning message at viewers around the world.

“Right now, in Halab, Syria, just an eight-hour drive from Tel Aviv, a genocide is taking place,” said Aharish, Israel’s first Arab news presenter, using the Arabic pronunciation of Aleppo. “You know what? Let me be more accurate: It is a holocaust. Yes, a holocaust. Maybe we don’t want to hear about it, or deal with it, that in the 21st century, in the age of social media, in a world where information can fit into the palm of your hand, in a world where you can see and hear the victims and their horror stories in real time — in this world we are standing and doing nothing while children are being slaughtered every single hour.”

Aharish is the first Arab citizen of Israel to anchor a prime-time newscast.

Aharish named several European countries and the United States, blaming them for “doing nothing” as civilians died. She accused the United Nations of “hypocrisy” for holding meetings and “wiping away a tear when they see the image of a father holding the body of his little daughter.”

“I am ashamed as a human being that we chose leaders who are incapable of being articulate in their condemnation and powerful in their action,” she said. “I am ashamed that the Arab world is being taken hostage by terrorists and murderers and that we are not doing anything. I am ashamed that the peaceful majority of humanity is irrelevant once again.”

Aharish, who grow up in in the southern Israeli town of Dimona, has made waves before with controversial statements. During last year’s wave of stabbings in Israel, she went on a jeremiad against Arab-Israeli leaders that drew polarized reactions across Israel’s different communities. “Arab leaders … are adding fire to the environment and instead of understanding that once it will calm down, we will be the ones to pay the price,” she said in October 2015.