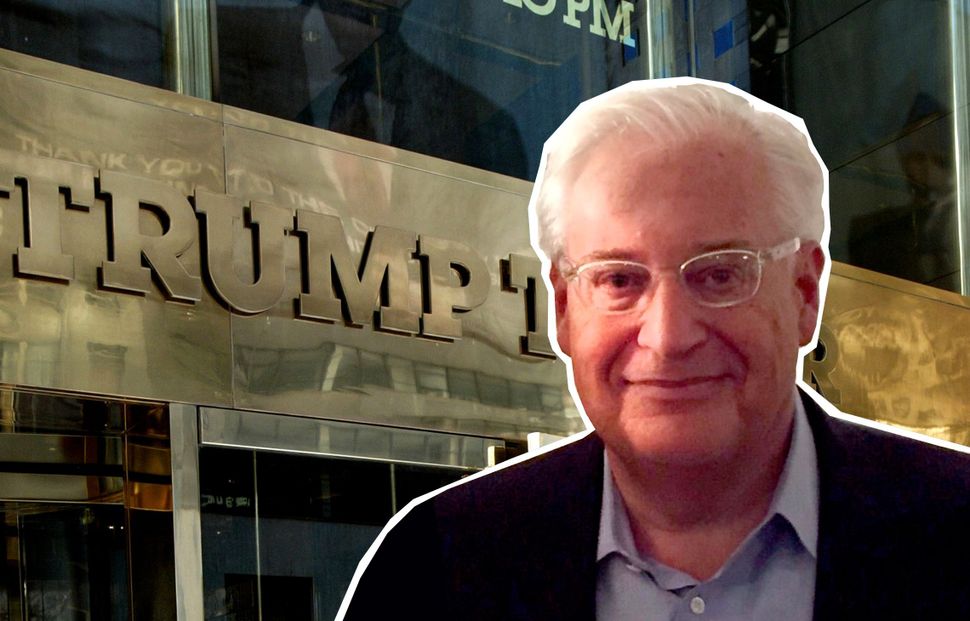 President-elect Donald Trump is nominating a top Jewish surrogate, David Friedman, to be ambassador to Israel, with a statement saying Friedman will serve from Jerusalem and describing the city as “Israel’s eternal capital.”

Friedman, a bankruptcy lawyer who has for years worked for Trump and his real estate development business, was with Jason Greenblatt, another Trump lawyer, and Jared Kushner, Trump’s son-in-law, one of his main emissaries to the Jewish community. Friedman this week briefed the Conference of Presidents of Major American Jewish Organizations on what to expect from a Trump presidency.

The Trump transition team’s statement said Friedman – who like the incumbent ambassador, Dan Shapiro, speaks Hebrew – intends “to work tirelessly to strengthen the unbreakable bond between our two countries and advance the cause of peace within the region, and look forward to doing this from the U.S. embassy in Israel’s eternal capital, Jerusalem.”

Congress recognized Jerusalem as Israel’s capital in 1995 and mandated the move of the embassy from Tel Aviv to Jerusalem, but successive presidents have exercised a waiver in the law, citing national security interests. U.S. security officials believe that moving the embassy to Jerusalem, a city holy to Christians and Muslims as well as Jews and claimed by the Palestinians as their capital, would precipitate anti-American violence in the region and beyond.

In what has become a feature of transition statements, the release included a dig at the outgoing Obama administration.

“The bond between Israel and the United States runs deep, and I will ensure there is no daylight between us when I’m President,” Trump said in the statement. “As the United States’ Ambassador to Israel, David Friedman will maintain the special relationship between our two countries.”

President Barack Obama increased U.S.-Israel defense and intelligence sharing, but challenged the practice of his two immediate predecessors – Bill Clinton and George W. Bush – of keeping diplomatic disagreements behind closed doors. Early in his administration, Obama told Jewish leaders the policy of “no daylight” had not advanced peace in the region.