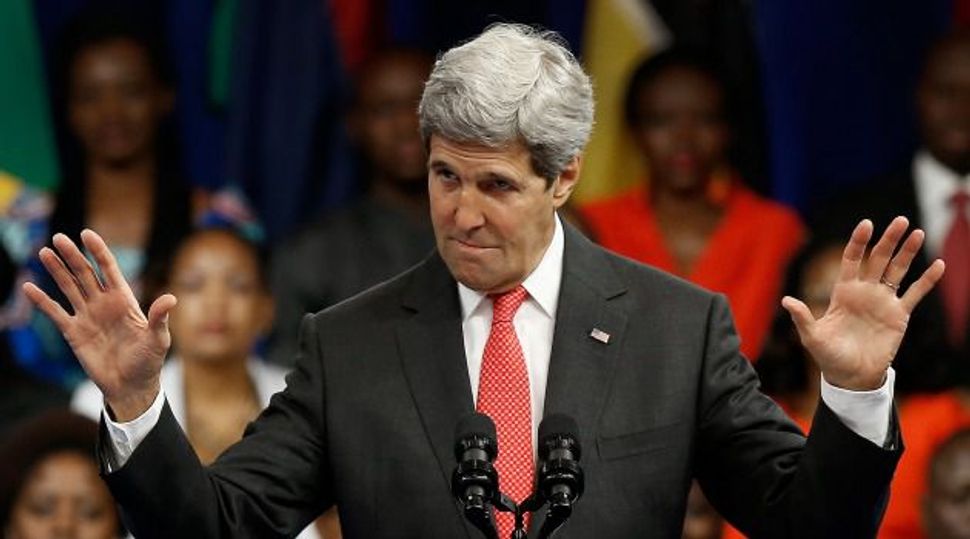 (JTA) — Jewish organizations split along ideological lines in their reactions to Secretary of State John Kerry’s speech criticizing Israeli settlement growth and laying out principles to achieve a two-state solution.

Centrist groups were measured in their reactions, criticizing the American decision to abstain last week on a U.N. vote rebuking the settlements while praising Kerry’s commitment to a two-state solution.

American Jewish Committee CEO David Harris wrote in an open letter Wednesday that he watched the speech “as one who understands that settlement-building beyond the security barrier is indeed a major impediment to the prospects for a final-status accord,” but added, regarding the U.N. resolution, that “it seems pretty clear that its consequence has been negative.”

The Anti-Defamation League also praised Kerry’s concern for Israel but criticized his focus on settlements.

“Secretary Kerry delivered heartfelt remarks,” read a statement from the group’s CEO, Jonathan Greenblatt. “However, his concern about policies and dynamics that may jeopardize the path to a secure peace seem to be disconnected from reality that there are two parties involved in this process, both of whom will need to make difficult choices to resolve the conflict.”

The American Israel Public Affairs Committee castigated the speech’s focus on settlements and said it could not support any element of the speech given the abstention, which Kerry defended.

“Secretary Kerry placed overwhelming, disproportionate blame for the failure to advance peace on our ally, Israel, while neglecting numerous Israeli peace offers and Palestinian refusal to resume direct talks,” AIPAC said in a statement Wednesday. “Any potential, positive contribution from this speech was foreclosed by the Obama Administration’s shameful refusal to veto the destructive, anti-Israel UNSC resolution.”

Liberal groups applauded the speech and called on Israel to adopt Kerry’s principles on Israeli-Palestinian peace, including borders based on the 1967 armistice lines, Jerusalem as a shared capital of Israel and Palestine, and a solution for Palestinian refugees that preserves Israel’s Jewish character.

Rabbi Rick Jacobs, president of the Union for Reform Judaism, expressed strong support for Kerry’s speech while voicing disagreement with the U.N. vote. He said in a statement that Kerry’s speech was “cast in some of the staunchest pro-Israel language and most forceful denunciations of Palestinian instigation of violence that we have ever heard from the podium at the State Department.”

“Secretary Kerry is also correct, of course, that the U.S. should not, and cannot, dictate a solution,” Jacobs said. “But his speech today reminds us that the United States has an indispensable role to play. It is difficult to imagine progress without vigorous American leadership, and the principles Secretary Kerry laid out today are a useful example of that leadership.”

J Street, the dovish Israel lobby that has been largely supportive of the Obama administration’s Israel policy, also praised the speech, as well as the Security Council resolution.

“J Street strongly supports as well the Secretary’s proposals for concrete steps toward the two-state solution that can be taken now and his outline of the basic principles on which resolution of the conflict can ultimately be based,” Jeremy Ben-Ami, the president of J Street, said in a statement Wednesday. “The Secretary laid out a clear choice for those who care about Israel’s future and security as the democratic home of the Jewish people.”

The Israel Policy Forum, a center-left group that favors the two-state solution, also supported the speech, as did the New Israel Fund, an umbrella fundraising body for left-wing Israeli nonprofits.

On the right, groups lambasted Kerry as anti-Israel and looked toward the inauguration of President-elect Donald Trump, who they believe will be friendlier toward Israel.

“U.S. Secretary of State John Kerry’s speech today essentially was a proposal for a Hamas-Fatah-Iranian-Palestinian-Arab terrorist state, which divides Jerusalem in two, forcibly evicts Jews from their homeland, and requires Israel’s retreat to indefensible borders,” Zionist Organization of America President Morton Klein said in a statement. “His speech was filled with anti-Israel vitriol and falsehoods.”