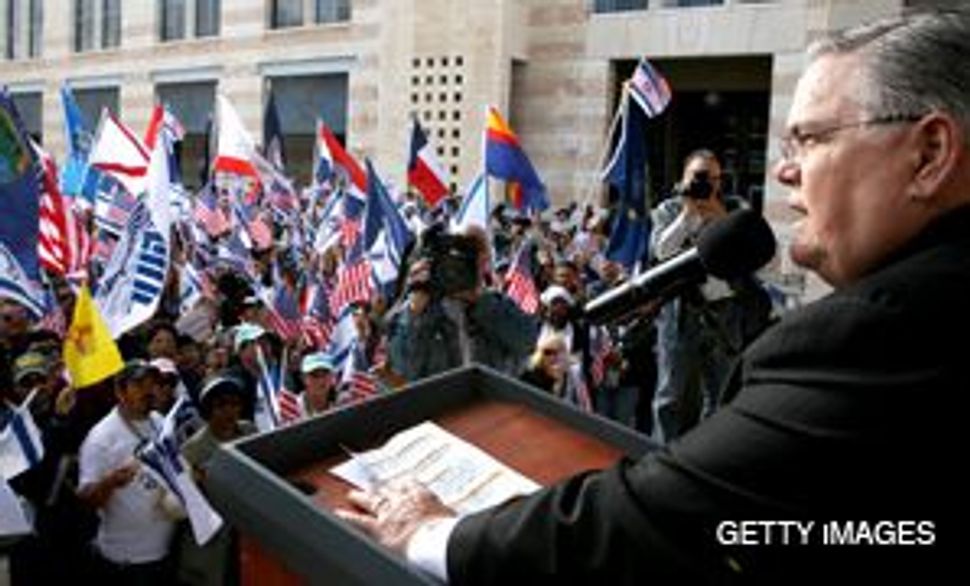 (JTA) — Leaders of the country’s largest evangelical pro-Israel lobby are flying in to Washington, D.C., to back bills that slam the recent U.N. anti-settlements resolution and force the president to move the Israeli Embassy to Jerusalem.

Some 260 members of Christians United for Israel are coming from 49 states to push the measures Wednesday on Capitol Hill, a CUFI news release said.

The tone of the release and of an interview with CUFI’s leadership in Bloomberg News ahead of the fly-in suggest that the group is ready to assert itself under President-elect Donald Trump, who is seen as friendly to the right-wing Israeli policies that CUFI has embraced in the past.

“There are millions of Christian Zionists across the country who are incensed at the Obama administration’s treatment of Israel, and we will make our voice heard both in the halls of Congress and at the ballot box,” Pastor John Hagee, the group’s founder, said in the release.

The two congressional measures favored by CUFI, both introduced in the Senate in recent days by Republicans, blast the Security Council resolution and would cut in half funding for embassy security across the world until the U.S. Embassy is moved to Jerusalem.

The Obama administration did not vote for the Security Council resolution, saying it lacked balance, but abstained. The abstention – lacking the veto that a U.S. vote against would have triggered – allowed through a resolution opposed by Israel for the first time during the Obama presidency and triggered sharp attacks on Obama from Israel’s government, the mainstream pro-Israel community, and most Republicans and some Democrats in Congress.

The CUFI delegates will also lobby for the confirmation of Trump’s pick for Israel ambassador, David Friedman, his longtime lawyer who has stirred controversy for describing some Jewish critics of Israeli government policies as “kapos” and who has deep and longstanding ties with the settlement movement.