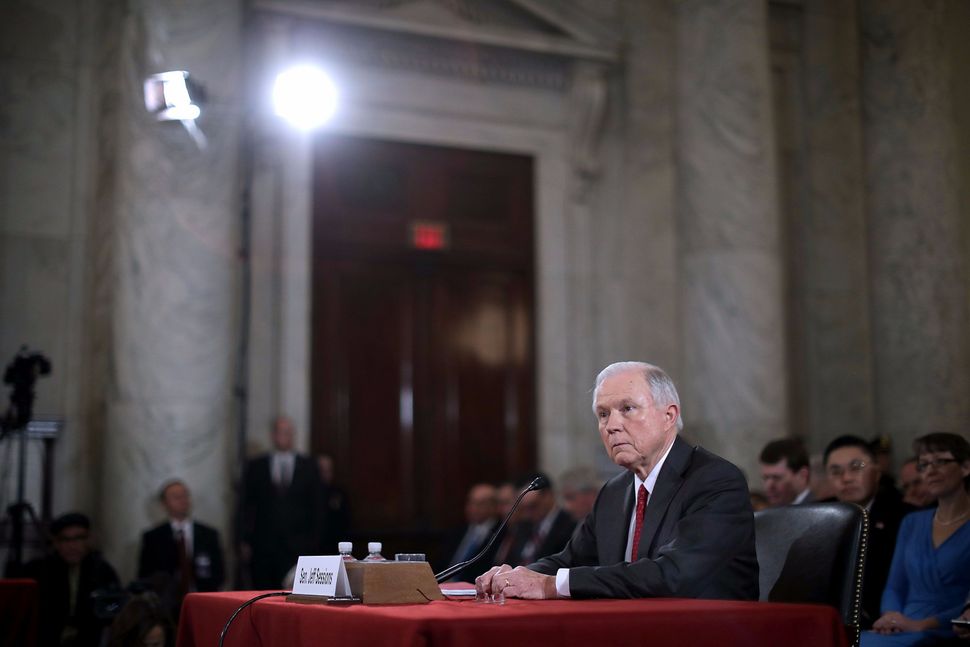 A Jewish senator from Connecticut grilled attorney general nominee Jeff Sessions Tuesday about his ties to conservative Jewish activist and publisher David Horowitz, suggesting that Sessions could not defend all Americans because he accepted an award from a man with overtly anti-Muslim views.

Sessions received the 2014 David Horowitz Freedom Center Annie Taylor Award for Courage, named for a schoolteacher who became the first person to survive a trip over the Niagara Falls in a barrel. The award has been given in the past to anti-Muslim activist Pamela Geller, and to former Arizona Senator Russel Pearce, who sponsored draconian anti-immigrant measures. This year’s award went to Breitbart News author Milo Yiannopoulos.

Horowitz has claimed that Hillary Clinton aide Huma Abedin is “a Muslim Brotherhood operative.” Horowitz, who is Jewish, has fiercely criticized House Minority Leader Nancy Pelosi as “a Jew-hating bitch” and conservative Trump opponent Bill Kristol as a “renegade Jew.” He called the Muslim Students Association at UCLA “a front for the Muslim Brotherhood.”

Speaking in 2014, Sessions told Horowitz receiving the award was “a special treat and pleasure for me because you know how much I admire you.”

In Washington, Sen. Richard Blumenthal (Conn.-D) asked Sessions why he did not include that award or his remarks in his dossier for review by the Senate.

“That statement was omitted from your response to the committee,” Blumenthal said. “Did you omit it because you were embarrassed about praising David Horowitz?”

Sessions countered that we was not aware of Horowitz’s anti-Muslim comments and maintained that Horowitz is “the most brilliant individual.”

Sessions insisted to Congress that he does not have a personal animus against Islam.

“I have no belief and do not support the idea that Muslims as a religious group should be denied admission to the United States,” Sessions said.

Blumenthal was born in Brooklyn to two Jewish parents and graduated from Harvard College and Yale Law School. He served as a U.S. Marine and worked as an attorney before he was elected to the Connecticut legislature in 1985. He has been a U.S. Senator for the last six years. His wife Cynthia Malkin’s father is a real estate tycoon who partly owns the Empire State building.

In the hearing Tuesday, Blumenthal practically begged Sessions to return the Freedom Center award and others he received, including the Franklin Society award, from the Federation for American Immigration Reform, whose founder John Tanton has stated that “For European-American society and culture to persist requires a European American majority” in the United States. Sessions also received an award from Frank Gaffney’s Center for Security Policy. Gaffney has argued that Barack Obama is a covert Muslim seeking to submit the United States to Islamic law.

“How can Americans have confidence that you’re going to enforce anti-discrimination laws if you’ve accepted awards from these kinds of groups and associated with these kinds of individuals and you won’t return these awards?” Blumenthal asked.

Sessions conceded that “I probably should have reported” that he won the Freedom Center award. He noted that former Sen. Joe Lieberman (Conn.-I) had also received an award from Gaffney.

“And he ran for vice president on your party,” Sessions added.

“David Horowitz is a brilliant writer and I think he’s contributed to the policy debate,” Sessions said. “Some of the language you’ve indicated does not, I’m not comfortable with, and you saw right to ask that question. But … I think it wouldn’t be proper for you to insist that I’m somehow disqualified for attorney general because I accepted an award.”

Blumenthal asked if Sessions would take an award from the Ku Klux Klan. Sessions said he would not.