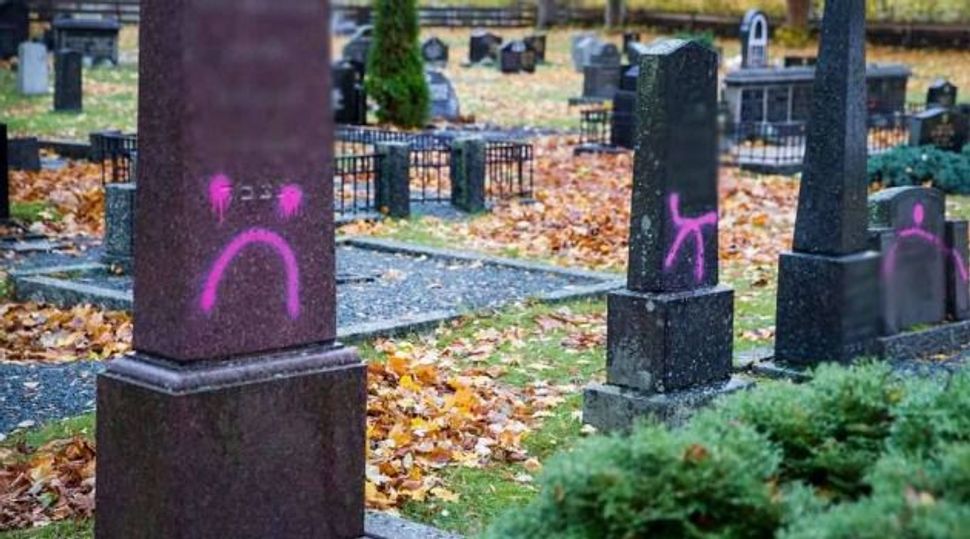 (JTA) — Unidentified perpetrators spray painted the words “kill Jews” and a white supremacist slogan on headstones at a cemetery in Cape Cod.

Several headstones were knocked over at Oak Neck, a 5.5-acre graveyard that is the only active cemetery in the village of Hyannis, 70 miles southeast of Boston, Fox25 reported last week. Oak Neck is not a Jewish cemetery.

Police in Barnstable are treating the investigation as a hate crime, Fox25 reported.

Some headstones were knocked off their bases, while spray paint was used to scrawl slogans on others. About a dozen or more tombstones were either kicked over or otherwise vandalized. Some of the graffiti was directed at police officers.

One headstone was defaced with the number 666, a number association with Satanic groups. Another featured the numbers “4.20,” ostensibly a reference to Adolf Hitler’s birthday.

The incident comes amid an increase in hate crimes in some parts of the United States following the November election.

The New York Police Department said it has seen a dramatic rise in hate crimes following the election of Donald Trump, with the majority of incidents directed at Jews.

There has been a 115 percent increase in bias crimes in New York City in the month or so following the election, with Jews being targeted in 24 of the 43 incidents. The incidents represented a threefold increase from November 2015, The New York Observer reported.

New York police investigated at least 360 hate crimes in 2016, an increase of 35 percent over 2015, according to The Economist.

Trump last month said he was “so saddened” to hear about vitriol by some of his supporters against minorities. “If it helps, I will say this, and I will say right to the cameras: Stop it,” Trump told CBS’ “60 Minutes.”