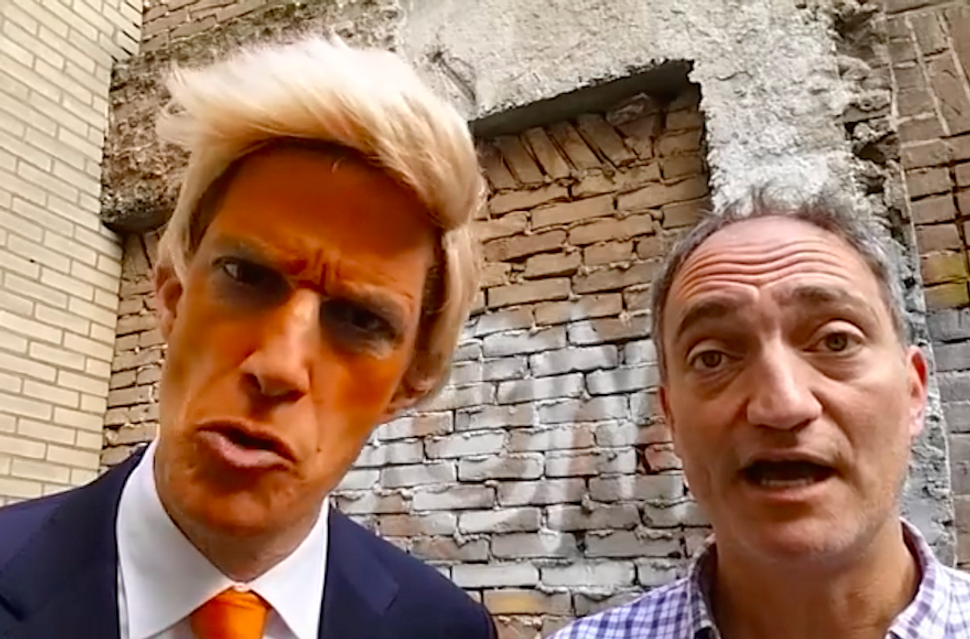 (JTA) — What is the best way to instruct Donald Trump on the virtues of a tolerant and multicultural society with a strong tradition of resolving conflicts through compromise?

That was the question that guided the writers of the Dutch television talk show “Sunday with Lubach” to produce a fake promotional video about their country that became a social media sensation after it aired over the weekend. The clip got 26 million views on Facebook and another two million on YouTube.

Using language and intonation the writers said they expected the new American president would understand, the video combined beautiful stock footage from Holland with a hilarious English-language voice-over by Trump imitator Greg Shapiro — a Jewish American comedian who lives and performs in Amsterdam.

“We speak Dutch. It’s the best language in Europe,” Shapiro says in Trump’s trademark staccato. “We’ve got all the best words, all the other languages failed!”

Danish, Shapiro adds, is “a total disaster. German is not even a language. It’s a fake language.”

The video, entitled “The Netherlands Welcomes Trump in his Own Words,” begins by announcing it is a promotional message from the Dutch government. It then goes on to juxtapose footage of famous Dutch attractions with Trumpian boasts about their greatness.

Against images of families riding ponies at the Slagharen pony park, a resort that in 2014 received over a million visitors to become Holland’s 12th most popular recreational destination, Shapiro brags that the ponies are the best in the world. “You can ride them, you can date them, you can grab them by the pony, it’s fantastic.”

Moving on to the Afsluitdijk, an engineering marvel that protects the nation from flooding and serves as a major traffic artery traversing the Wadden Sea, Shapiro’s Trump calls it “a great, great wall that we built to protect us from all the water from Mexico.”

Also, “we made the Mexicans pay for it, it’s true,” the Dutch Trump says.

Shapiro, 48, has been imitating Trump for months now on his YouTube channel and on stage as part of his elections act, “Angry White Men,” with his high school buddy Pep Rosenfeld. Two Jews from Illinois, they came to Amsterdam approximately 20 years ago to start the Boom Chicago comedy club, which is now one of the Dutch capital’s most successful.

The Trump impression audible in the viral video was preceded by a learning curve, he told the Het Parool daily Tuesday in an interview.

“The penny dropped when I realized that Trump actually does not have a New York accent. The man is 100 percent Manhattan but he speaks like a California surfer dude,” Shapiro told the daily.

In the video, Shapiro sings the praises of Madurodam, a miniature park built in 1952 in The Hague by the parents of a Dutch Jewish war hero, Shapiro’s Trump boasts that “the squares, they are so small, you don’t even need many people to fill them. It’s great.”

Beyond monuments, the video showcases the Black Pete tradition, in which many Dutchmen wear blackface to portray the Dutch Santa Claus’ African helper. “It’s the most offensive, the most racist thing you’ve ever seen. You’ll love it. It’s great.”

Shapiro then moves on to Holland’s State Secretary for Social Affairs and Employment Jetta Klijnsma, who suffers from a physical handicap — or in Shapiro’s view “a disabled politician for you to make fun of.” Over footage of Klijnsma using  a walker to get around, Shapiro offers this observation: “She’s from the Ministry of Silly Walks. You can do a great impersonation of her. Can’t wait to see it.”

In conclusion, Shapiro narrates, the Netherlands has “a great, great, great dependency on the United States.” And Dutchmen “totally understand it’s going to be America first. But can we just say: The Netherlands second? Is that okay?”

With so many successful Trump impersonations out there – from Alec Baldwin to Johnny Depp,, to name just a couple – Shapiro “never expected this to go viral,” he told Het Parool.

Then again, he added, he also never expected Trump to become president.