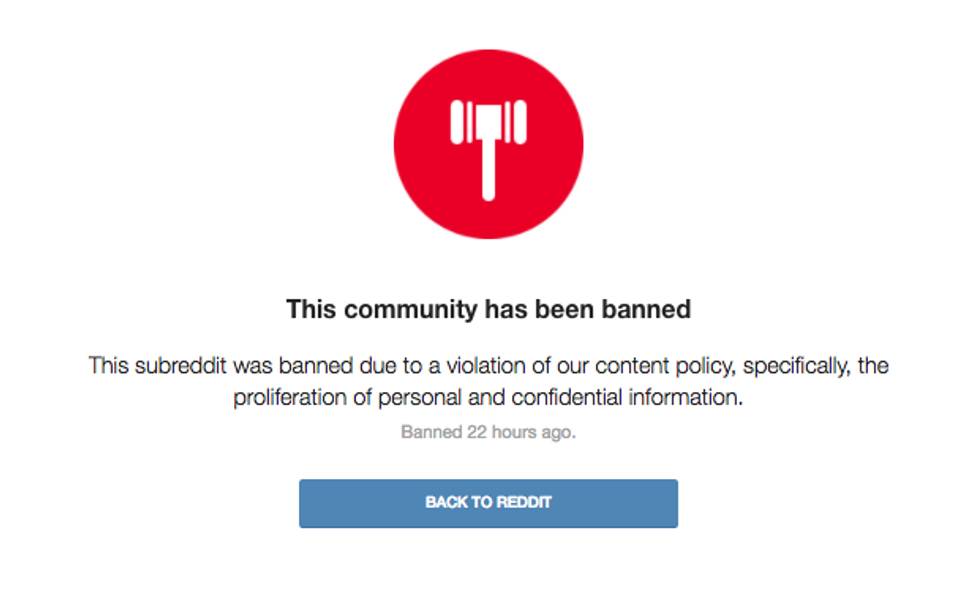 Last night, Reddit banned two forums associated with the white nationalist “alt-right” movement, hours after one group had celebrated a banner month during which they had attracted thousands of new subscribers. Reddit shut down the two main congregating points for the “alt-right” — r/altright and r/alternativeright — leaving only a brief explanatory note.

This may have had something to do with an ongoing campaign to identify a masked man who famously punched “alt-right” figurehead Richard Spencer last month.

According to one r/altright moderator, they were “encouraging users to go to some kind of ‘bounty’ site, where users collaborate to attempt to gather personal information on targets,” according to a private message sent to the site Gizmodo.

This may be a reference to the site WeSearchr, where more than $5,000 has being raised to dox Spencer’s masked assailant.

“We anticipated Reddit would terminate the sub soon because they typically don’t allow these types of right-wing groups to get much bigger than 20,000 subscribers, and /r/AltRight was rapidly nearing that point,” Throwahoymatie, a former mod of r/altright told Gizmodo in a private message.

JohnnyTruthSeed, told Gizmodo that the subreddit was shut down because it had grown too popular: “the administrators of Reddit are cucks [and] we were exposing the truth about Zionism.”

Reddit, which prides itself as being a champion of free speech, has struggled with the question of if and when to regulate hateful speech.

For example, in November Steve Huffman, Reddit’s CEO, said he modified posts from Trump supporters who were harassing him online. In July of 2015, Reddit also banned a group dedicated to targeting overweight people.

Other social media platforms have also had difficulty dealing with the energized “alt-right” movement. Spencer and a handful of other “alt-rght” accounts were booted from Twitter, seemingly after violating the platform’s rules pertaining to hateful speech. Spencer’s account was reactivated, but his publication Radix Journal is still banned. (The bounty site WeSearchr has also been kicked off.)

Members of the “alt-right” were already seeking to spin the Reddit ban to their advantage.

“There’s nothing we can do about censorship on social media,” Hunter Wallace, also known as Brad Griffin, wrote on the new website Altright.com, “but maybe we can parlay all of this censorship and repression into a romantic image. We’re dangerous. We’re edgy. We’re outlaws.”