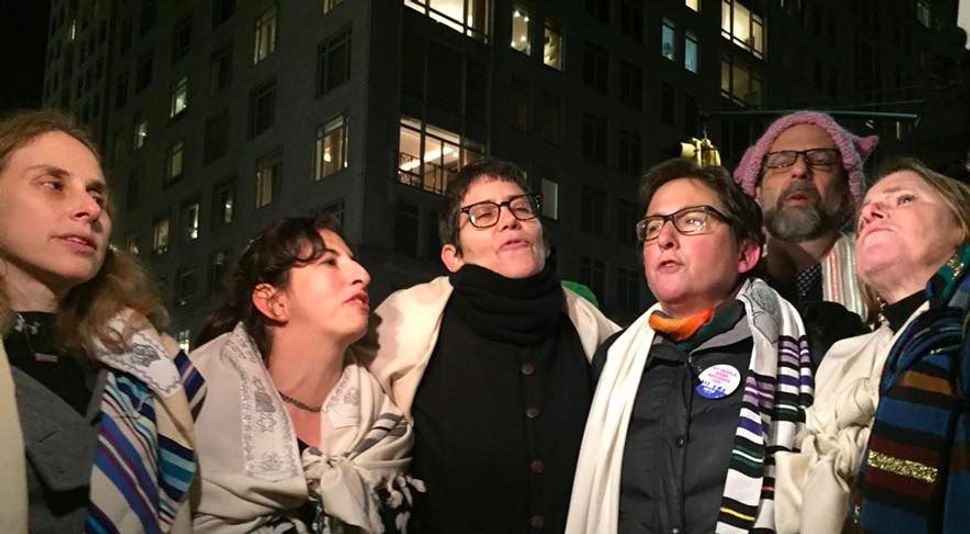 NEW YORK (JTA) — Reform Jewish leaders largely oppose President Donald Trump’s policies — and they haven’t been shy about saying so since his election.

They’ve marched in the streets by the thousands. They’ve protested at airports. And this week, some were arrested in front of a Trump hotel here.

“If there are areas where this new administration actually advocates and enacts policies that are reflective of our enduring Jewish values and our policy positions, then we’ll work with them,” Rabbi Jonah Dov Pesner, director of the Religious Action Center, the Reform movement’s legislative advocacy arm, told JTA. “But if they don’t, if they’re consistent with the kind of rhetoric we heard during the campaign, we’ll oppose it with every strength of our being.”

Advocating for liberal policy is nothing new for the Reform movement, which founded the RAC in 1959 and pushed for civil rights in that era and since. With the surge in liberal activism that has accompanied the election of Trump, the movement senses a chance to become the leading Jewish voice resisting what it sees as his administration’s discriminatory or unjust policies.

“The urgency of what we care deeply about has become front and center for tens of millions of people,” said Rabbi Rick Jacobs, president of the Union for Reform Judaism.

“It’s not that social justice might be good for us as an opportunity,” he added. “This is what we care about.”

In the days following Trump’s refugee ban, Jacobs was flying to a Reform movement conference in Dallas. He was among several rabbis who arrived at the airport and walked directly to a protest there. One week earlier, the movement drew more than 1,000 people to a Shabbat prayer service ahead of the Women’s March on Washington. Am Shalom, a Chicago-area Reform synagogue, made headlines when it took in a Syrian family of four in the hours before Trump’s travel order went into effect. And this week, two Reform rabbis were among the 19 arrested in a protest of the refugee ban in front of a the Trump International Hotel in Manhattan.

All major American Jewish movements put out occasional statements on public policy, especially regarding Israel. The Orthodox Union also has a Washington, D.C., advocacy center like the RAC that generally takes conservative positions. There was a rare moment of unity last week when all four major American Jewish denominations issued statements criticizing Trump’s executive order on travel in some form.

But the Reform movement has made opposing the president’s policies part of its agenda, even when they don’t directly relate to Jewish parochial concerns. The RAC is prioritizing refugee rights and increasing Muslim-Jewish cooperation through dialogue and legislative policy, but it’s also focused on protecting voting rights, opposing the confirmation of attorney general nominee Jeff Sessions and protecting undocumented immigrants.

“The idea of Jewish spiritual community being about feeding the hungry, clothing the homeless, caring for the stranger — these are fundamental core pieces,” Jacobs said. “If we don’t talk about those things in our religious communities, we’re irrelevant.”

But that agenda could create tension for the movement, which in addition to advocating for liberal policy is also the largest Jewish denomination in the United States. According to the Pew Research Center, 40 percent of American Jews self-identified as Reform in 2013. And at least one of them does not agree with the movement’s political agenda: Matt Brooks, president of the Republican Jewish Coalition, is a Reform Jew.

“The politics that the Reform movement engages in is disenfranchising a significant part of their own congregation,” Brooks said. “It is creating a false choice no one should have to make between their political views and their spiritual views.”

Reform rabbis acknowledge that being simultaneously ecumenical and activist can be challenging, especially now. But those JTA spoke to denied that the movement is partisan, and said that rabbis ground their statements in values, not politics.

“For American Jews and their fellow clergy, I know it’s not a political issue. It’s a moral issue,” Andy Bachman, the former rabbi of Reform Congregation Beth Elohim in Brooklyn, said regarding the refugee ban. “There’s a long history of Jewish leaders speaking truth to power, using a moral voice in government. Rabbis who step into the breach to decry Trump’s laws [as] immoral are standing on very solid ground.”

Jacobs also noted that the movement has opposed policies of Democratic presidents, too. In December, the Central Conference of American Rabbis, the rabbinic arm of the movement, chided President Barack Obama for abstaining on a United Nations Security Council resolution condemning Israeli settlements.

“[T]he United Nations is not the arena in which to address these complex issues,” the CCAR declared.

Pesner said that disagreement is natural at synagogue, and that the key for rabbis is to create space for their congregants to voice alternate views.

“We have some number of Reform Jews who voted for this president,” he said. “I will never know why they did, but we will never assume any evil motive.”

The Reform movement inculcates in its teens the idea that political activism is part and parcel of Jewish practice. At an upcoming convention of its youth group, NFTY, attendees can participate in a social justice track that includes programming on racial justice, economic injustice, LGBT and gender equality, the environment and pluralism in Israel.

“Judaism is primarily a central set of values about the way we treat people in our world,” said NFTY member Lauren Stock, 17, of Dallas. “To me, that seems directly linked to social justice and ‘tikkun olam,’ making the world a better place. Ignoring social justice in Judaism is simply just ignoring a huge piece of our religion.”

To Brooks, justifying liberal activism by invoking the idea of tikkun olam is a “bastardization” of the concept. Brooks said synagogues should stick to the non-political aspects of religion, such as prayer, community and self-improvement.

“A synagogue should be a place of worship,” Brooks said. “I think it should be about having a stronger relationship with God, and being better people and about those kinds of things, without getting into all the other policy stuff.”

Pesner and Jacobs agree that the bulk of the Reform movement’s work is apolitical in nature. But they said it’s impossible to divorce what happens in the synagogue from the decisions being made outside of it.

“If you add up the total activism of the Reform Jewish movement, the overwhelming majority of what we do is the study of Torah and the worship of God,” Pesner said. “The political stuff is a tiny part of what we do, but that’s what everyone notices.”