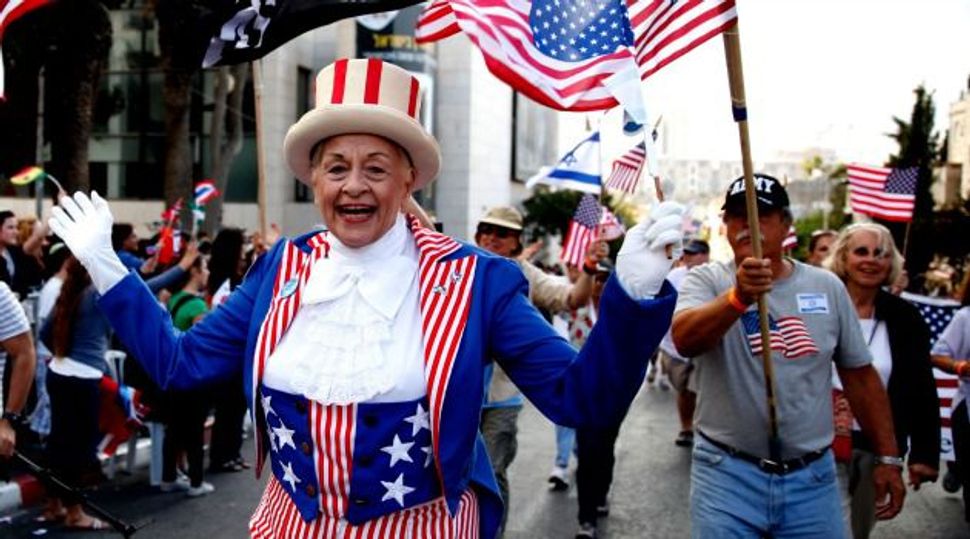 TEL AVIV (JTA) – Evangelicals, who have been advocating for Israel for years, have historically let the Jews take the lead.

Laurie Cardoza-Moore, for one, is excited that they are poised to take on a prominent role. An evangelical TV host and activist, Cardoza-Moore backs President Donald Trump’s pick for U.S. ambassador to Israel, David Friedman, a supporter of the settlement movement who is deeply skeptical of the two-state solution.

And she is confident Trump will make good on his promise to move the U.S. Embassy to Jerusalem from Tel Aviv.

“I am excited to see this development. It further illustrates the commitment of this incoming a Christian news service. “And God willing, Friedman will be the one who helps orchestrate that transition.”

Cardoza-Moore was in Israel last week filming a new episode of “Focus on Israel,” which is widely syndicated on Christian television. In an interview at a Tel Aviv café last week, she said in over 15 years of pro-Israel work as the president of Proclaiming Justice to the Nations, she has seen evangelicals rally to the cause.

“After the 9/11 attacks, a lot of Christians were ready to hear our message,” she said. “Having read the Bible, they felt we were under a curse and the way to change that curse was to make sure we supported Israel. I always knew if we could get the information to the Christians, they would respond and they would stand up.”

But while that support is undeniable and certainly welcomed by a Jewish state that could use all the friends it can get, it still discomfits many in the pro-Israel camp, especially liberals. They worry evangelicals’ Bible-based views are too right wing, both on social issues as well as Israel affairs.

“There’s a real danger because most evangelicals are very hawkish and hard-line on Israel,” said Dov Waxman, a political scientist at Northeastern University who studies American Jews and Israel. “The more they get involved, that risks alienating more liberal Jews from pro-Israel advocacy and from Israel.”

Cardoza-Moore’s commitment to Israel is unquestioned, and often indistinguishable from what mainstream Jewish groups might take on. In 2013, she gained national attention with a campaign against a geography textbook being used in her Tennessee school district that asked students to consider whether a Palestinian suicide bomber who kills “several dozen Israeli teenagers in a Jerusalem restaurant” is acting as a terrorist or as a soldier fighting a war.

Cardoza-Moore spoke at school board meetings, gathered hundreds of signatures and appeared on Fox News to advocate against using the book. The local Jewish federation took her side. In the end, the school board concluded the book was not biased, but the publisher removed the offending line from electronic and future print editions.

Perhaps Cardoza-Moore’s biggest victory came in 2015, when at her urging, the Tennessee legislature passed a resolution condemning the Boycott, Divestment and Sanctions movement against Israel, the first of its kind in the nation. Although the resolution took no action against BDS, it labeled the movement “one of the main vehicles for spreading anti-Semitism and advocating the elimination of the Jewish state.”

Since then, Cardoza-Moore has pushed for similar resolutions in other states. Ten states have now passed them, and three more are considering doing so. Governors in 15 states have signed laws that prevent the boycott of Israel.

It likely helps that the Republican Party in recent years has been dominant in state politics. The GOP has increasingly become the pro-Israel party. Evangelicals, who make up more than a quarter of the American population and overwhelmingly vote Republican, have shaped the party’s identity on Israel in many ways.

“If we look at why the Republicans tend to take pro-Israel positions, I think a major reason for that is evangelical Christians,” Waxman said. “In red-state America, it’s the views of evangelicals that really matter when it comes to Israel.”

And with Trump’s victory, red-state America is in control of the executive branch. Christians United for Israel, or CUFI, has been ramping up its activities in Washington, D.C. The Israel lobby claims 3.3 million mostly evangelical members. By contrast, the mostly Jewish AIPAC has approximately 100,000, though it is more experienced and better funded.

After long deferring to the American Israel Public Affairs Committee, CUFI founder and board member David Brog said his group planned to get “a little more aggressive” in pushing its policies in the Trump era, when it has clout and connections, including to evangelical Vice President Mike Pence.

“At a time when we have a Republican in the White House and Republicans control the House and Senate, we see CUFI as able to play a leading role in speaking to governing majorities that know they owe their election in large part to our base,” he said.

Brog described CUFI as “within the mainstream” and respectful of AIPAC’s history of bipartisanship. But he acknowledged that CUFI’s members tend to be “right of center” and “skeptical of the two-state solution.” The group, he said, would not necessarily sit out debates or avoid criticizing ideological opponents in an effort to keep them in the pro-Israel camp.

“We need to draw clear lines and be clear about where we stand,” he said. “That does not necessarily damage bipartisanship. Drawing clear lines may help define what it means to be pro-Israel.”

As Bloomberg’s Eli Lake pointed out, CUFI has not taken a position on the two-state solution to the Israeli-Palestinian conflict, which AIPAC officially supports, and has backed legislation to defund the Palestinian Authority, which AIPAC has not. CUFI has also thrown its weight behind Trump’s pro-settlement pick for ambassador to Israel, David Friedman.

Some Jewish observers have suggested that growing evangelical involvement in Israel advocacy could turn Israel into a right-wing Republican issue. Aside from concerns about the implications for Israel, they say, that could make it less attractive to more liberal Jews, who already are drifting away from the community and are increasingly critical of Israel’s policies.

“It’s like a brand. If Israel is associated with right wing and ‘reactionary’ forces, then it’s going to be a turnoff to younger American Jews,” Waxman said. “It may be superficial, but we’re talking about public perceptions.”

Brog, who is Jewish, argued Israel and its supporters could not afford to apply a “religious test” on the issue.

“I got involved in Christian advocacy because I can count,” he said. “If the pro-Israel community is limited to the Jewish community, it’s too small. The reason the American government is pro-Israel is because the American people are profoundly and overwhelmingly pro-Israel. But we can’t take that for granted.”

A senior official at a dovish Israel advocacy group said he thought American Jews and Israel would ultimately define their own relationship, regardless of who else was in the picture.

“I’d be foolish to say evangelical Christians don’t have an effect. But I don’t really care what they say,” said the official, who asked to remain anonymous. “At the end of the day, it’s a homeland for the Jewish people. So it’s how we choose to express our love for Israel that really matters.”