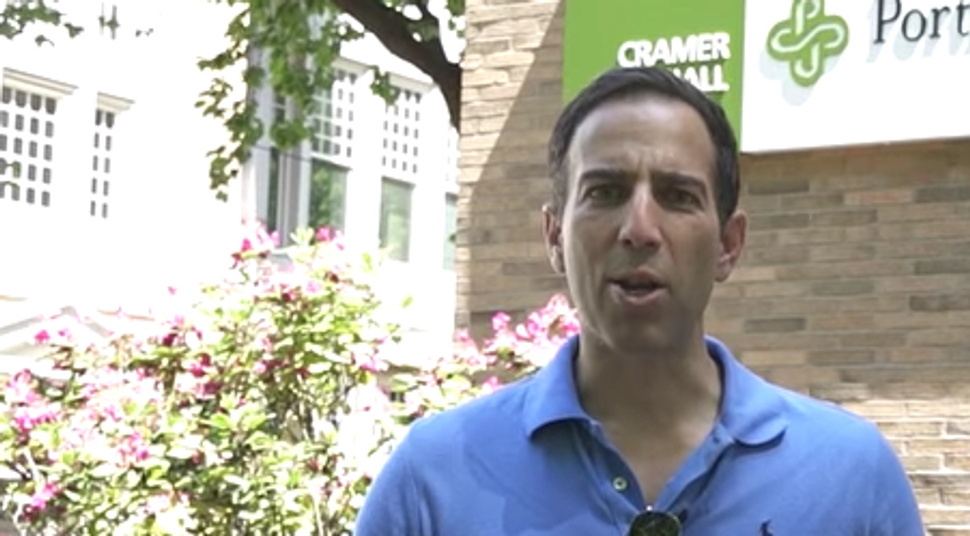 (JTA) — Pressed to explain his false claim that something terrible had happened in Sweden last week, President Donald Trump traced the canard back to the reporting of Ami Horowitz, a gonzo Jewish-American filmmaker who spoke about Sweden’s problem with Muslim immigrants on Fox News.

On Saturday, during a campaign-style speech in Florida on border security and immigrants, Trump urged listeners to “look at what’s happening last night in Sweden,” leading to widespread puzzlement and mockery from Swedes who said no terrorist attack had taken place there the previous day or even recently.

Karl Bildt, a former prime minister of Sweden, wondered on Twitter what Trump “is smoking,” and the Aftonbladet paper ran a daily roundup from Friday featuring nothing more sinister than a small northern avalanche.

Later Saturday afternoon, Trump indicated that the only thing that happened Friday is that he caught Horowitz talking about Sweden on Fox News.

My statement as to what’s happening in Sweden was in reference to a story that was broadcast on @FoxNews concerning immigrants & Sweden.

In his Fox News interview Horowitz, a former investment banker turned activist with a camera, claimed violent crime by refugees was out of control in Sweden and that the government there is covering up reports of rape to protect “vulnerable” migrants.

Coming amid a polarizing debate about the millions of immigrants arriving in Europe from the war-torn Middle East and Africa, the comments by Trump touched off a discussion about the president’s shaky handle on the facts.

But, Horowitz told JTA, it also “put a spotlight on the main issue: Sweden’s problems with immigration and crime. Which is positive.”

Horowitz has also reported on what he and others call Sweden’s “no-go zones” – areas that are densely populated by mostly Muslim immigrants from Africa and the Middle East that many native Swedes, and Jews especially, avoid for fear of harassment and robbery.

A 43-year-old father of two, Horowitz last year went filming in a no-go zone in the Stockholm neighborhood of Husby, where he recorded an alleged assault on himself by several Arab speakers who objected to his filming on the street.

“My crew ran off when they approached, but since I was miked we have the first few seconds of the attack,” Horowitz, a Los Angeles native who lives in New York, told the Daily Mail. “They repeatedly punched, kicked and choked me as a number of bystanders watched. Eventually they dragged me into a building, which at the time I assumed was to finish me off.” Horowitz ultimately was released.

On Monday, violence erupted in another no-go zone, Rinkeby, where locals torched several cars after police arrested a man there, the Dagens Nyheter daily reported.

Horowitz, a vocal critic of Trump during the campaign, describes himself as “at times conservative, at other times liberal.” He said the incident in Husby was not his first close call while making films that offer a hard look at liberal causes or defend Israel.

In 2016, he took an 11-hour road trip in the West Bank to counter claims that Israeli security forces restrict movement there. At a crossing point into Israel, an adrenaline-filled Horowitz was filmed throwing rocks back at Palestinians who hurled them at him and others waiting to enter.

In 2009, while filming a prickly documentary about the U.N. double standard on Israel and other issues, he traveled to war-torn Cote D’Ivoire to investigate incidents in which U.N. soldiers opened fire on unarmed demonstrators. In the same film, Horowitz seized the microphone at the controversial 2009 Durban Review Conference in Geneva, telling attendees that they should be “embarrassed and ashamed” by their anti-Israel bias. The incident was also captured on tape by JTA.

And in 2015, he sailed with Syrian immigrants infiltrating Europe across the Aegean Sea, reporting that he saw an ISIS recruiter attempting to recruit some of the would-be newcomers.

In 2014, he filmed the reactions of students at the University of California, Berkeley, as he variously waved Israeli and ISIS flags on campus; students are shown ignoring the ISIS flag but reacting angrily to Israel’s. In another film he asked New Yorkers to sign a petition titled “Cops’ Lives Matter.”

Initially, Horowitz’s no-go experience in Sweden generated little attention in the country, where “mainstream media tend to not report the ethnicity of perpetrators of crimes,” according to an employee of the Swedish Migration Board who spoke to JTA on Tuesday on condition of anonymity for fear of being fired.

But Trump’s remarks focused intense attention in Sweden to the link between crime rates in the country of 9 million and its admittance since 2013 of more than 300,000 asylum seekers mainly from Muslim countries.

Sweden had been one of the most welcoming nations in Europe to refugees, but in 2016 drastically cut back on asylum quotas. The government said it was over housing issues.

Some have cited Sweden to defend Trump’s executive order limiting immigration from seven predominantly Muslim countries. Some regard Sweden as an inspiring role model for its efforts to resettle asylum seekers. But others see it as a failed experiment, and say it has contributed to an unprecedented rise in the popularity of far-right anti-Islam parties that are riding a wave of discontent over the arrival of unskilled immigrants at a time of economic stagnation.

As for Sweden’s 20,000 Swedish Jews, they have seen an explosion of hate crimes against members of their community in recent years. Dozens of incidents are documented annually in Malmo alone, a southern city with only 1,000 Jews where a third of the population of 300,000 are Muslims.

Trump’s remark also exposed Horowitz to criticism for his gonzo style of journalism, which owes more to Michael Moore and “The Daily Show” than CNN. In the past he has filmed interviews without permission, provoked onlookers’ reactions with outrageous stunts  and edited footage to ridicule interviewees. Horowitz defends his methodology as accurate, though he admits it is “confrontational and provocative.”

On Monday, two police officers he interviewed for his Sweden documentary, in which Horowitz claimed Muslims are overrepresented among perpetrators of criminal activity, said he edited their answers manipulatively. Horowitz denied the charge and attributed their reactions to pressure from their superiors.

In an op-ed published Tuesday by the Svenska Dagbladet, Linda Nordlund, a former chairwoman of the Liberal Youth of Sweden, criticized Horowitz for relying on anonymous sources in asserting that a majority of women waiting at a police station were there to report rape. She said Horowitz “is known for his xenophobic views” and that his report is “full of inaccurate statistics and innuendo.”

But in that same op-ed, Lund also said that Trump’s “false claims” and Horowitz’s “fake news” eclipse a necessary discussion on real problems – including the undisputed overrepresentation of foreigners in criminal activity. Authorities in Sweden do not publish precise data on the nationality or ethnicity of perpetrators, which the media also squelch.

Lund also noted an increase in sexual harassment in public swimming pools, though she wrote that Horowitz’s claims that rape is increasing are false.

Still, while there was a dip in the number of reported rapes in 2015, the average has risen in Sweden by 18 percent in the years 2011-2016 to an average of 6,341 cases annually, compared to 5,260 cases in the years 2006-2010, according to the Swedish National Council for Crime Prevention. (Some attribute that to a change in the types of acts that can be classified as rape.)

“There’s been a lot of discussions about statistics, a lot of back and forth,” Horowitz said of the effects of his reporting in Sweden. “There’s a lot of disinformation but on the whole, this overdue discussion is a good thing for Sweden and Europe.”