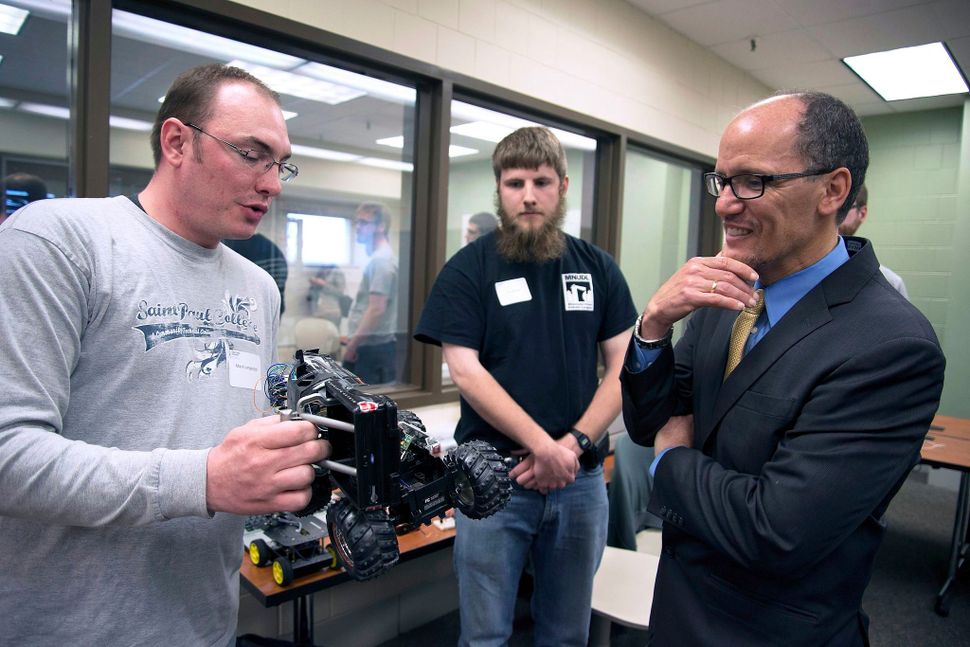 Perez was elected Saturday on the second ballot, winning 235 votes out of 435 cast at a gathering in Atlanta of the electors.

The race was largely fought on who was better positioned to rebuild the party after its devastating losses in November when Democrats went to defeat in elections for the president and both chambers of Congress.

Perez, who as Labor Secretary under President Barack Obama cultivated a reputation as an activist ready to antagonize big business, had better ties among the DNC electors, comprised of state party officials and state officials, including governors, lieutenant governors, and attorneys general, as well as representatives of special interests.

The race was sucked into two controversies that were tangential to a campaign that mostly focused on who was better positioned to resuscitate the party.

One was Israel and Jewish-related, with Ellison still living down his association decades ago with the anti-Semitic Nation of Islam – for which he has apologized – and more recently, his tough criticism of some Israeli government policies.

Perez spoke in December on a phone call organized by Jewish backers of Clinton, who feared Ellison’s baggage would erode Jewish support for the party that has traditionally drawn at least two-thirds of the Jewish vote. On the call, Perez noted his past work as a Justice Department official with the Anti-Defamation League combating hate crimes and spoke of a recent visit to Israel.

Haim Saban, the Israeli-American entertainment mogul who is a mega-donor to the party, had called Ellison an anti-Semite, drawing outraged responses from Ellison’s Jewish backers.

The other controversy informing media coverage of the party was the identification of Perez with the party establishment, seen as having failed catastrophically in the elections, and of Ellison with Sanders and the more youthful insurgents who had backed him.

All of the candidates, however, campaigned on virtually the same platform – one that excoriated, at least by implication, the party establishment, including Clinton and former President Barack Obama for having neglected the grassroots for eight years

After his election Saturday, Perez headed off dissent by immediately naming Ellison vice-chairman, and Ellison took the microphone to plead with his supporters, “We don’t have the luxury to walk out of this room divided.”

“The son of immigrants from the Dominican Republic, he embodies the diversity of America and strongly supports government action against hate crimes,” the American Jewish Committee said in a statement. “Mr. Perez is also a longtime friend of the State of Israel, has visited the country, and has spoken out forcefully against the BDS (boycott, divestment, and sanctions) movement that seeks to delegitimize the Jewish state.”

Also praising Perez was Bend the Arc, a progressive group that had vigorously defended Ellison against charges he was anti-Semitic, and Jews for Progress, a political action committee. All of the candidates in forums repudiated claims that Ellison was an anti-Semite.

Steve Rabinowitz, a Democratic consultant in Washington D.C. who helped Perez in his outreach to Jewish Democrats, said in an email that he was pleased Israel “was not an issue” in the campaign, and said that there’s an “important place for Keith Ellison in our party’s leadership.”