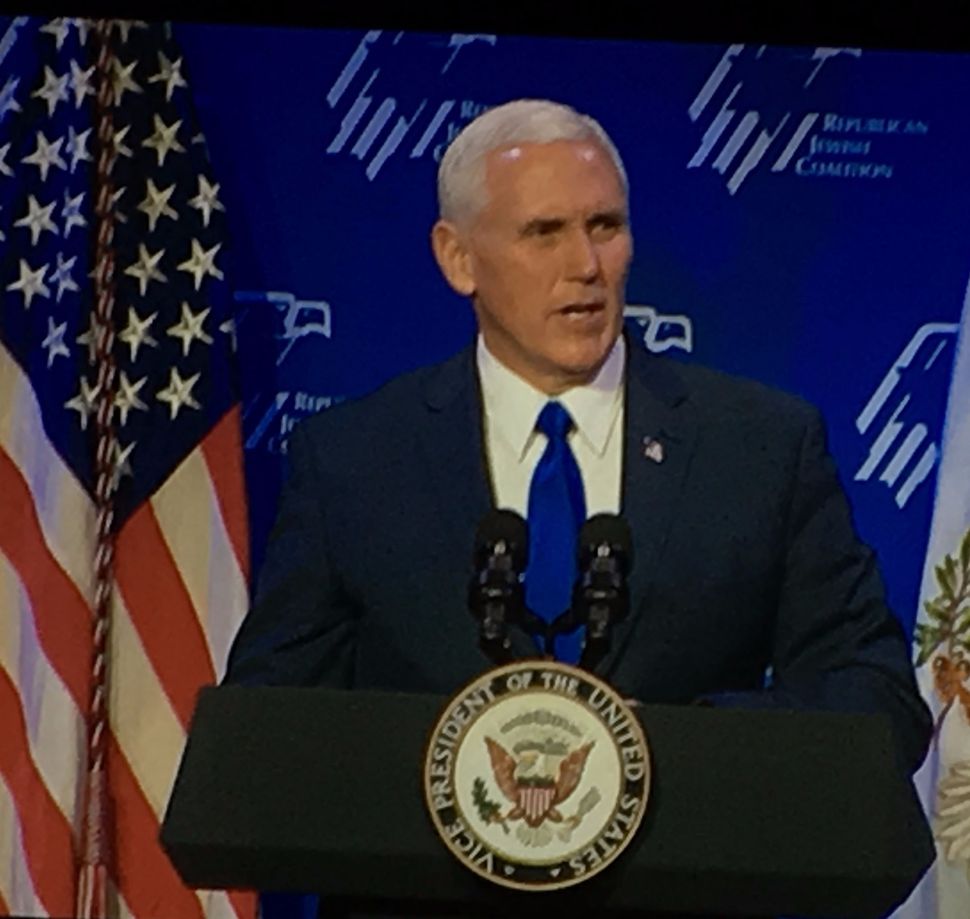 An American Israel Public Affairs Committee official confirmed to JTA that Pence will keynote the conference scheduled for March 26-28 in Washington, D.C.

Pence, who enjoyed a long relationship with the pro-Israel lobby as a congressman and later as Indiana governor — but as a local congressman in 2009, told AIPAC that he didn’t know of the three synagogues in his district — spoke last month at the Republican Jewish Coalition’s annual confab and has taken a lead in condemning recent anti-Semitic incidents.

Also scheduled to speak will be top lawmakers from both parties, including Sen. Bob Corker, R-Tenn., the chairman of the Senate Foreign Relations Committee, and Sen. Ben Cardin, D-Md., its ranking member; and Rep. Kevin McCarthy, R-Calif., the U.S. House of Representatives majority leader, and Rep. Steny Hoyer, D-Md., the minority whip.

Hoyer and McCarthy likely will continue a tradition of top Republican and Democratic lawmakers appearing to claim that while they may differ on some issues, they are agreed on support for Israel. However, fissures between the parties have emerged, with Democrats still forcefully backing a two-state solution to the Israeli-Palestinian conflict, while President Donald Trump has retreated from explicitly backing that outcome.

Jewish Insider reported on Friday that a letter to Trump from House members asking him to reaffirm support for the two-state solution — led by Reps. David Price, D-N.C., and Gerry Connolly, D-Va. — has so far gathered 115 signatures, only two of them from Republicans.

Additionally, Democrats want to preserve the Iran nuclear deal reached by President Barack Obama, while Trump is skeptical of the deal and has said he might want to pull out of it.

AIPAC continues to back the two-state solution and backs measures that would subject the deal to a review.

Another area where there might be partisan tension is around support for funding the Palestinian Authority. Republicans propose cutting funding to the PA as long as it disburses compensation to families of terrorists, while Democrats oppose the measure, saying that the authority helps keep the West Bank stable, which is critical to Israel’s security.