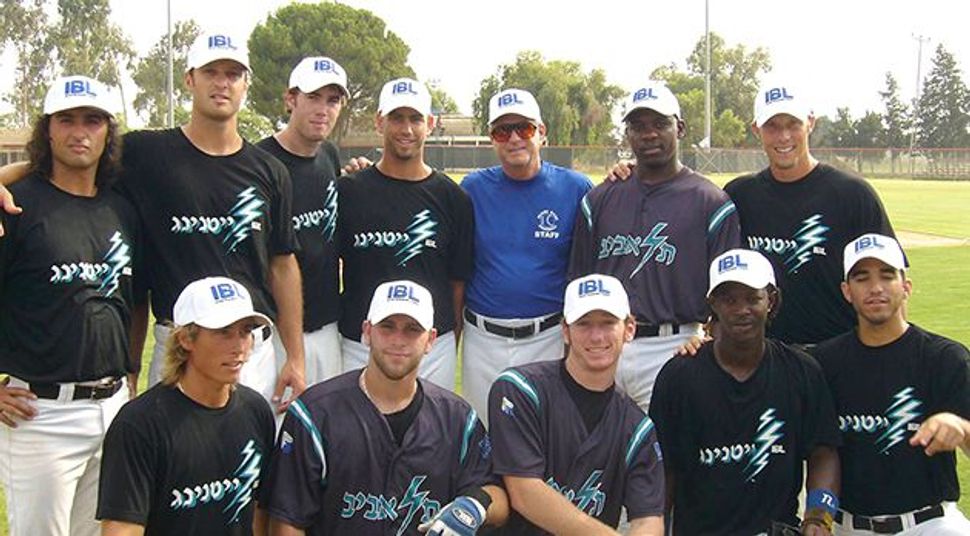 Hoping To Strike More Than Once: The professional Tel Aviv Lightning baseball team pose for the flash. Image by AARON PRIBBLE

JERUSALEM (JTA) — Israel lost its first game in the World Baseball Classic, losing in a rematch with the Netherlands by a score of 12-2.

Israel is now 4-1 in the tournament overall, and 1-1 in the second round of the 16-team quadrennial tournament.

Israel was the lowest-ranked team to qualify for the showcase tournament, coming in at 41st in the world. But last week in the first round, the Israelis squeaked past third-ranked South Korea, 2-1, in extra innings, outscored fourth-ranked Taiwan, 15-7, and defeated ninth-ranked the Netherlands, 4-2, to finish first in Pool A with a 3-0 record.

This is the first year that Israel has qualified for tournament. In 2012, its inaugural WBC squad narrowly missed advancing past the qualifiers.

Most of the players are American Jews, among them several former major leaguers. World Baseball Classic rules state that players who are eligible for citizenship of a country may play on its team. Jews and their grandchildren, and the grandchildren’s spouses, have the right to become Israeli citizens.

Baseball is little watched or played in Israel. But for the small local baseball community, which includes many American immigrants, Israel’s run in the tournament has been thrilling. The team’s mascot, a life-size doll of an Orthodox Jew called Mensch on the Bench, has highlighted the club’s Jewish identity to the world.