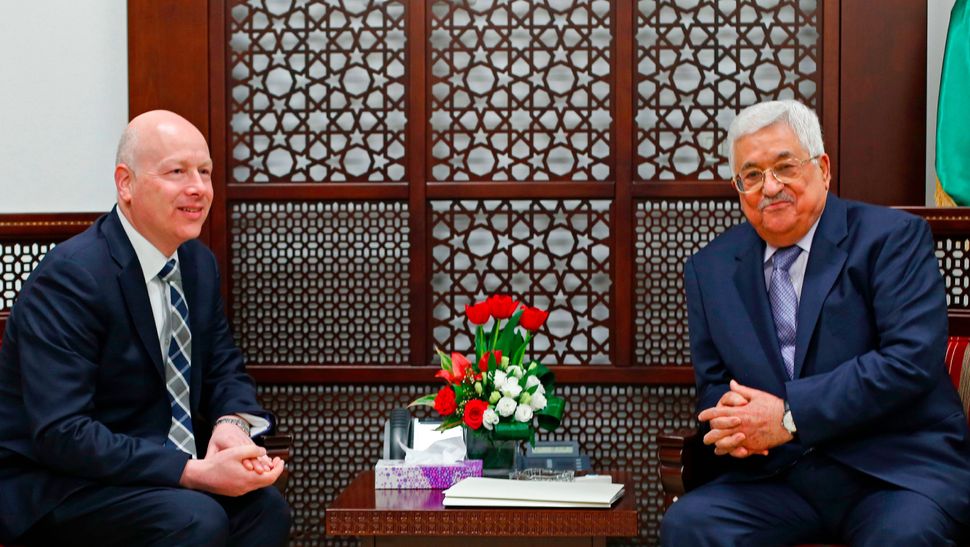 Jason Greenblatt’s talks with Abbas took place in Ramallah, the Palestinian seat of government, a day after he held a lengthy meeting with Israeli Prime Minister Benjamin Netanyahu in Jerusalem.

“President Abbas & I discussed how to make progress toward peace, building capacity of Palestinian security forces & stopping incitement,” Greenblatt tweeted after the meeting.

In a separate statement issued by the U.S. Consulate General, the two men “reaffirmed the commitment of both the Palestinian Authority and the United States to advance a genuine and lasting peace between Israel and the Palestinians.”

Abbas stressed that the Palestinian strategic choice was to achieve a two-state solution, the statement added.

Peace talks between Israel and the Palestinians have been frozen since 2014. Since his inauguration on Jan. 20, Trump has been ambivalent about a two-state solution, the mainstay of U.S. policy in the region for the past two decades.

Tuesday’s statement said Abbas had told Greenblatt he believed that under Trump’s leadership “a historic peace deal was possible.”

Abbas and Greenblatt also discussed plans to strengthen the Palestinian economy and the importance of ensuring economic opportunities for Palestinians, the statement said.

On Monday, Netanyahu and Greenblatt discussed Israel’s settlement building “with the hope of reaching a formula that will aim to promote peace and security,” the Israeli leader’s office said.

One of the most heated issues between Israel and the Palestinians is Israel’s building of settlements in the occupied West Bank and East Jerusalem, territory the Palestinians want for their own future state along with the Gaza Strip.

Greenblatt, a longtime top lawyer in Trump’s company, also serves as the president’s special negotiator for trade deals, among other responsibilities.—Reuters