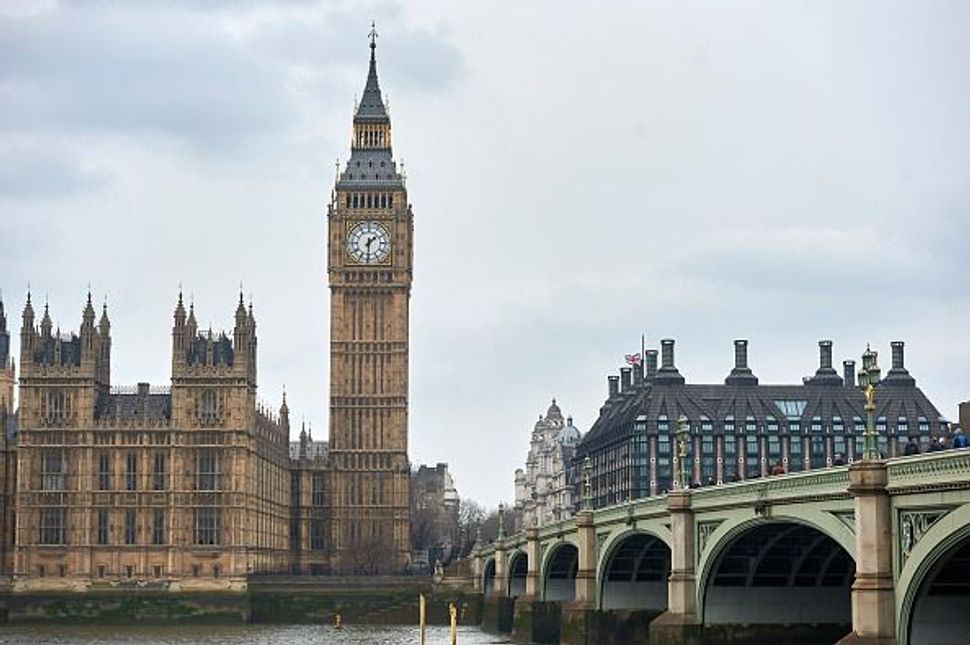 (JTA) — At least two civilians and a police officer were killed in a car-ramming and knife attack outside of the houses of Parliament in London.

British authorities are calling the attack a “terrorist incident” as they continue to investigate the motive in the Wednesday afternoon attack.

More than 20 are reported injured, some seriously. The attacker was shot and killed by police after crashing into a crowd of pedestrians on Westminster Bridge and then exiting the vehicle brandishing a knife. He stabbed a police officer to death inside the gates of the Parliament building. The attacker has not yet been identified.

The Community Security Trust, the United Kingdom’s main watchdog group on anti-Semitism, called on the Jewish community to be “calm, vigilant and to co-operate with security measures,” a spokesman told the London-based Jewish Chronicle. The CST said there is not believed to be any immediate threat to the community.

Additional police patrols were visible in London neighborhoods with large Jewish populations, such as Stamford Hills.

“The prayers of the Jewish community are with the families of the victims and with our security services, who so often selflessly place themselves in harm’s way for our protection.”

“Israel expresses its deep shock at the terror attack in London today and its solidarity with the victims and with the people and government of Great Britain. Terror is terror wherever it occurs and we will fight it relentlessly,” Deputy Foreign Minister Tzipi Hotovely said in a statement about the attack. Israeli Prime Minister Benjamin Netanyahu, who also holds the Foreign Minister’s portfolio, was on an airplane back to Israel from China at the time of the attack.

Israel expresses its deep shock at the terror attack in London and its solidarity with the British people.We are fighting this war together

The European Jewish Congress in a statement condemned the attack, calling it a “cowardly and barbaric terror attack.”  The EJC also extended its condolences to the British government and the British people.

“This strike, at the heart of democracy, on the anniversary of the Brussels attacks which claimed the lives of 32 people, once again demonstrates that radical extremists continue to have the ability and motivation to commit mass murder in Europe,” EJC President Dr. Moshe Kantor said in the statement.

“This murderous ideology targets all of Europeans and all of Europe must stand together to fight this scourge.”

U.S. Secretary of State Rex Tillerson in a statement condemned the attack.

“On behalf of the United States, I express my condolences to the victims and their families. The American people send their thoughts and prayers to the people of the United Kingdom. We condemn these horrific acts of violence, and whether they were carried out by troubled individuals or by terrorists, the victims know no difference,” the statement said.