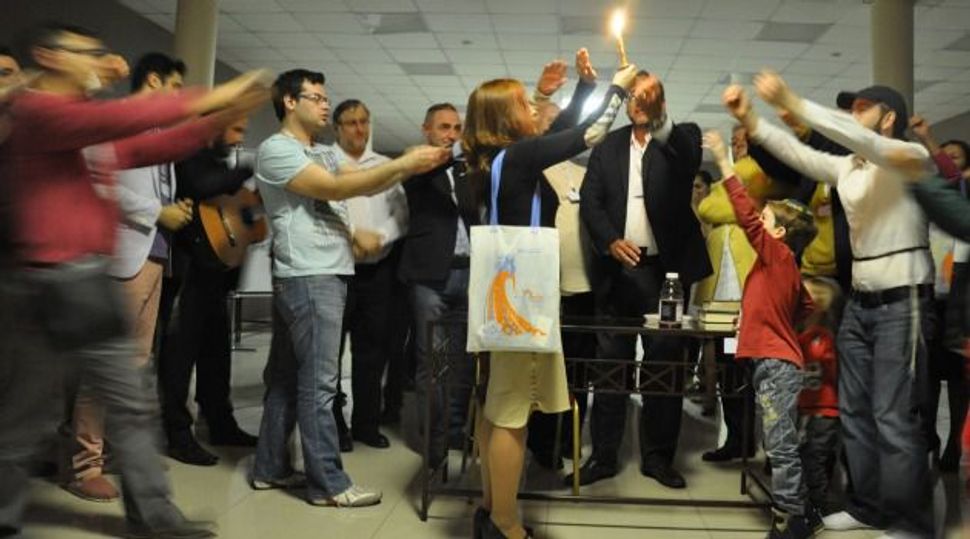 Havdalah in Moscow: Limmud FSU intends to introduce more religious content, thanks to an infusion of money from the International Fellowship of Christians and Jews. Image by Nathan roi

(JTA) — A record 2,500 people signed up for this year’s Limmud conference on Jewish learning in Moscow.

Attendance this year at the main event organized by Limmud FSU – an international organization putting together Jewish events in the former Soviet Union — exceeded last year’s tally by 25 percent, organizers said in a statement Thursday. The event is scheduled to take place next week for the 11th consecutive year.

In comparison, last year’s Limmud conference in Britain, the original and main home of the event, drew 2,800 participants.

Limmud FSU in Moscow “is the largest secular gathering of Jews today” in Russia, Rabbi Pinchas Goldschmidt, the chief rabbi of Moscow, told JTA on Friday. Religious spiritual life for Jews has seen a revival under President Vladimir Putin, said Goldschmidt, with dozens of synagogues and rabbi-led Jewish community centers opening across Russia.

Rabbis affiliated with Chabad, including Russian Chief Rabbi Berel Lazar, have had a leading role in this process. But “the secular part of the Jewish community has become much less active,” said Goldschmidt, who is not part of Chabad. “Limmud FSU came and filled this gap.”

Chabad’s annual Hanukkah event, organized at the Kremlin, draws a crowd of 6,000 annually.

The success of the Limmud concept in the former Soviet space is connected with local communities’ “thirst for knowledge,” Goldschmidt also said. Partly due to the emphasis placed on education during communism, “the cultural background of Russian Jews is more geared toward learning than in Western culture,” he added.

And because studying of scripture, and particularly Jewish scripture, was discouraged under communism, “there is a sense in those communities that there is a lot of catching up to do,” said Goldschmidt.

Limmud FSU founder Chaim Chesler said in a statement that the expected record turnout “is evidence that Jewish life is thriving in Russia.”

Still, Jewish emigration from Russia is on the rise following economic crisis that has seen the ruble lose more than half its value against the dollar since 2014. Another factor encouraging aliyah, or immigration to Israel, from Russia are steps deemed undemocratic by Putin’s government and a perceived increase in nationalist sentiment, according to Jewish Agency Chairman Natan Sharansky.

Last year, Russia was Israel’s largest source of newcomers with 7,166 immigrants – a 7 percent increase over the previous year. In the first two months of 2017, aliyah from Russia rose by 34 percent compared to the corresponding months in 2016, to a total of 1,186 immigrants.

Israeli’s justice minister, Ayelet Shaked, and Lazar are among those scheduled to attend the Moscow Limmud. The event will include more than 250 workshops, roundtables and activities for children, and 12 lectures each hour on topics including Jewish history, politics, cooking and the arts.