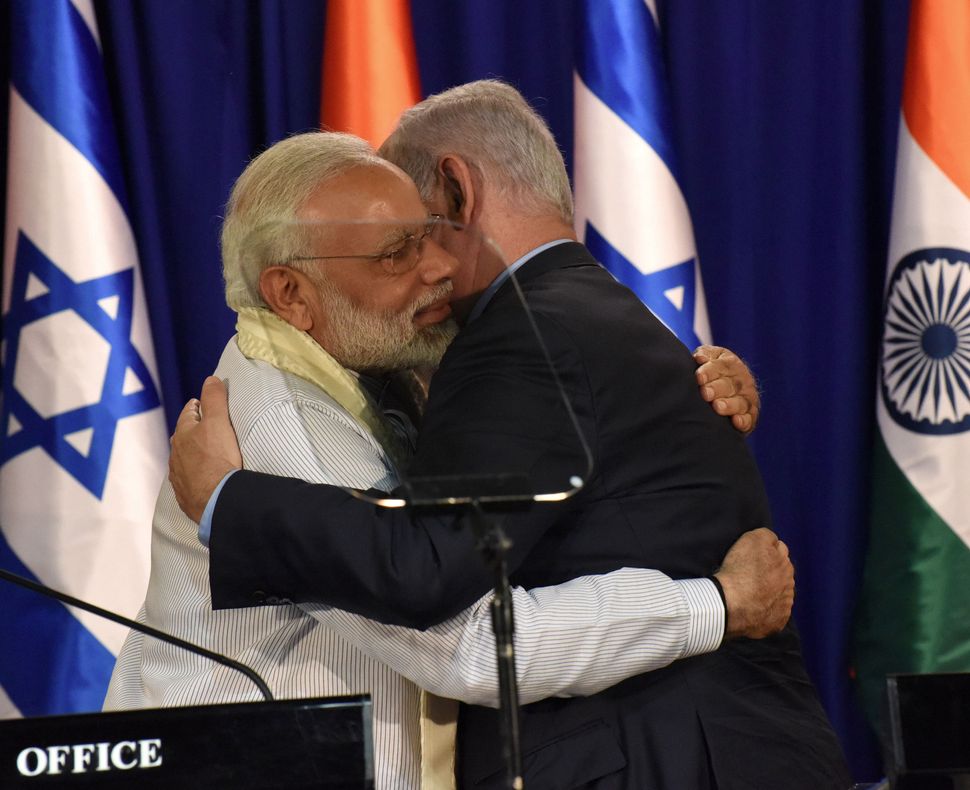 But “India and Israel” was never written in the stars: For years one of the world’s largest democracies kept its distance from one of its loneliest. India recognized Israel in 1950 and Israel soon opened a consulate in Mumbai (home to a substantial Jewish community), but it took until 1992 for India to establish full ties, and until the middle of the last decade, it was slow going.

The non-issue of non-alignment

India was one of the five co-founders in 1956 of the non-aligned movement, an attempt by emerging nations to establish a vanguard against American and Soviet influence.

Israel’s first prime minister, David Ben-Gurion, was intrigued by the non-aligned movement, but ultimately believed it was in Israel’s best interests to throw in with the West.

Meanwhile, India’s first prime minister, Jawaharlal Nehru, bought into the Arab narrative that Israel was instead a leftover of colonialism.

That was compounded by the influence on the non-aligned movement of another one of its five founders: Gamal Abdel Nasser, then the president of Egypt.

“Part of the reason the distance has always been there stems from India taking leadership of the non-aligned, and concerns about colonialism and Israel” that circulated in the movement, said Richard Rossow, the Wadhwani Chair in U.S.-India Policy Studies at the Center for Strategic and International Studies.

The justification for the existence of a non-aligned movement has ebbed since the collapse in 1991 of the Soviet Union, said Clifford May, the president of the Foundation for Defense of Democracies. America is now the only major power.

Fresh from the U.S. success in leading the ouster from Kuwait of Saddam Hussein’s Iraqi forces, President George H. W. Bush had a message for allies and would-be allies hoping to join the post-Soviet New World Order: “In order to have a relationship with the United States in the early 1990s you have to have a relationship with Israel,”  said Jason Isaacson, the American Jewish Committee’s associate executive director for policy, who was in Israel helping to coordinate events surrounding the Modi visit.

India was one of the first to sign up, establishing full relations in 1992. At first, trade was limited more or less to diamonds, Isaacson said – Israel is a major diamond-cutting center. But as successive Indian governments encouraged market-driven economies, it expanded to the technical, agricultural and security sectors — and also Israeli arms sales to India. The trade relationship is now worth more than $4 billion annually.

Indians crave Israeli technology and Israelis crave Indian markets. The signature photo op of the Modi visit was the Indian leader and the Israeli prime minister wading into the ocean near Haifa and talking Israeli desalination techniques.

There were important markers in the emerging relationship under governments led by both of India’s major parties: the Congress Party founded by Nehru, and the more Hindu nationalist BJP, now led by Modi. In 2003, then-Israeli Prime Minister Ariel Sharon visited India and since the beginning of the century there have been multiple visits by top ministers to both countries.

BJP governments, which led the country from 1998-2004 and since 2014, have been prone to accelerate the relationship. David Makovsky, the Ziegler distinguished fellow at the Washington Institute for Near East Policy, said this was in part because the pro-Hindu BJP – and Modi in particular – were less sensitive to the sensibilities of the country’s huge Muslim minority.

“You have in the case of Modi someone who is identified with a kind of an India-first orientation that is not inhibited in a way previous Indian leaders may have been because of the domestic makeup of their country,” he said.

The Sunni Arab world, another force that once drove Israel’s isolation, is itself more open to dealing with Israel, primarily because of shared threats posed by Iran and radical Islamist terrorist groups.

“Some of it plays into the regional changes in the Middle East,” said Ken Jacobson, the Anti-Defamation League’s deputy national director. “The fact that the Saudis can be more open in relations with Israel” opens the way for other countries.

“All three of them seem very simpatico in their meetings with one another,” said Jacobson. “There’s a feeling of ‘I’m talking to someone who understands me.’”

May, of the Foundation of Defense of Democracies, recalled a meeting Modi had a year ago with think-tank representatives when he visited the United States. The Indian leader asked all the representatives to say what was on their minds about the India-U.S. relationship; an array of topics came up, including educational exchanges, trade, employment, but only May mentioned Islamist terrorism. Yet when Modi launched into his response, that topic – the terrorist threat – constituted at least three quarters of his time, May said.

“He was clearly concerned about threats from Islamists and jihadists in Pakistan,” May said. “That is part of the reason he would see Israel surrounded by jihadists who want to destroy it” and seek its expertise in preventing such attacks.

One of the Indian cities most afflicted by terrorist attacks in recent years has been Mumbai, and another signature moment in the Israel trip was Modi’s meeting with Moshe Holtzberg, 11, the son of Chabad emissaries who were killed in a 2008 terror attack in the city.

Modi, in his speech at the airport, also cited – to a visibly moved Netanyahu – the heroism of the Israeli prime minister’s martyred brother, Yonatan, who died leading the 1976 on hijackers in Uganda.

But it’s also the Indian diaspora…

Isaacson said one of the drivers of the renewed relationship was an Indian American community eager to forge ties with its Jewish counterpart – and a Jewish community, led by the AJC in this particular case, eager to engage.

“It’s a sister minority faith community, with immigrant roots, dedicated to education, dedicated to the same basic values that have mobilized our community,” he said. “They’re natural partners and friends.”

Modi, perhaps more than any of his predecessors, believes in engagement with the Indian diaspora; he made a point of meeting with Indian Israelis, believed to number about 100,000, during his visit. Some 10,000 turned up.

India has for decades been a favored destination for Israelis taking a year’s break after completing army service. Bumping into Hebrew speakers in Modi’s home state of Gujarat has become commonplace. Correspondingly, tangents of Indian culture have spread throughout Israel.

An Israeli Foreign Ministry video features scenes from a mass yoga-in in an Israeli park, captioned, “Indian culture continues to impact and enhance Israeli society.” Netanyahu, clapping his hands, together greeted Modi with a hearty Sanskrit “Namaste.” (Modi responded by saying in fractured Hebrew that he was honored to be in Israel, to Netanyahu’s giggling delight.)

But don’t get too excited.

“There is a jitteriness that as they put all their eggs in the European basket that if the environment in Europe turns hostile relating to BDS and other issues they remain vulnerable,” he said, referring to the Boycott, Divestment and Sanctions movement.

Jacobson of the ADL cautioned against any Israeli outlook that veered too sharply from its western alliances.

“There’s a long discussion and debate among Israelis about how Israel conducts its foreign policy, its dependency on the United States,” he said. “There have always been people who say we need to diversify our support. For those of us who care deeply about Israel, there’s no substitute for America.”

India is unlikely to give up purchasing oil from Iran, or its other development projects and investments in that country, although the Islamic Republic is Israel’s enemy number one.

“There’s a comfort level” in the United States and Israel “with India maintaining its relationship with Iran — because they will,” said Rossow of CSIS, citing the trade relationship and India’s vested interest in maintaining regional relationships. Only Pakistan and Afghanistan separate India from Iran, and all three countries are deeply invested in Afghanistan’s development.

“There’s no good reason for Modi to be picking a fight or getting on Iran’s bad side,” said May, whose FDD is one of the leading think tanks that otherwise advocates Iran’s isolation.