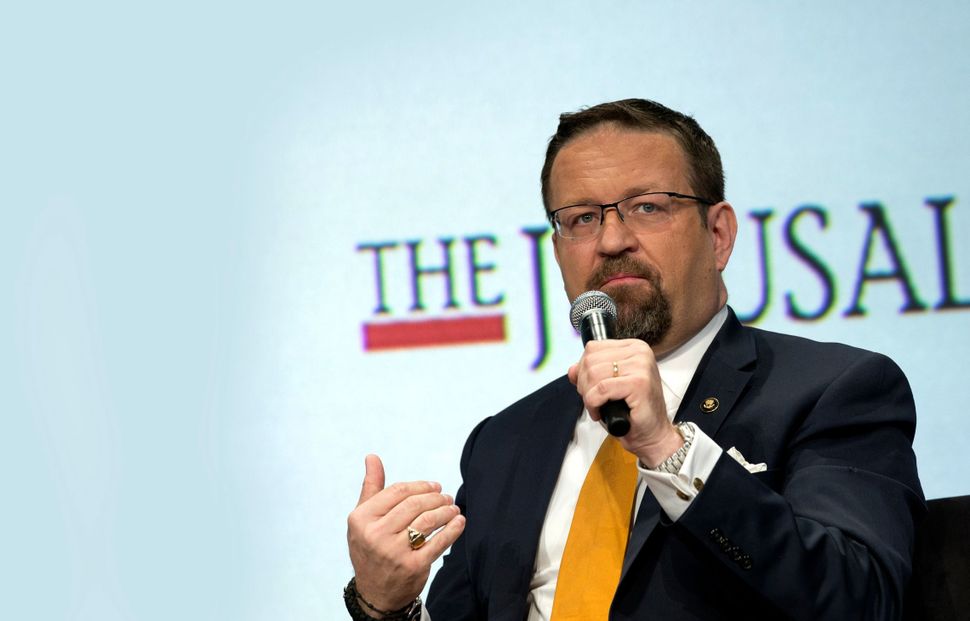 A new Rolling Stone profile of presidential aide Sebastian Gorka has hit the internet just as the Trump-favored émigré with ties to far-right racist and anti-Semitic forces in Hungary is opining increasingly on mainstream media on sensitive topics from North Korea to U.S. mosque bombings.

The profile, by free-lancer Bob Dreyfuss, notes the role of Katharine Gorka, a wealthy heiress who is Gorka’s spouse, in helping to establish a network of think tanks in the Virginia area that gave the couple a initlal platform to do research “on the rise of radical Islam.”

Beyond that, Dreyfuss for the most part neatly summarizes Gorka’s journey from the far outer margins of the national security analysis field to the White House under Trump. There, it notes, he has once again been marginalized from the actual policy making process by senior figures such as Lt. Gen. H. R. McMaster, Trump’s national security advisor.

Instead, as an unnamed former top White House official tells Rolling Stone, “His only job appears to be to go on talk radio or Fox News to defend the indefensible.”

Most recently, that has involved going on the air to explain why Trump, as a president who reacts instantly to many jihadist terrorist acts, has been silent about the August 5 explosion at a Minnesota mosque that the state’s governor has denounced as “an act of terrorism” after the FBI found it was caused by an improvised explosive device.

Trump, Gorka told MSNBC, was waiting to first learn who committed the crime. “We’ve had a series of alleged hate crimes [committed] by right-wing individuals in the last six months, that turned out to actually have been propagated by the left,” he told his interviewer. Gorka didn’t clarify to what series of crimes he was referring.

On Wednesday, Gorka delivered a bristling warning to North Korea to abandon its nuclear missile threats against the United States, declaring, “We were a superpower. We are now a hyper-power.” Nobody, he said, and “especially North Korea” comes close to matching America’s military might.

Gorka did not explain how, in the event of a military action, the United States would prevent North Korea from using its many missiles to instantly obliterate Seoul, the capital of U.S. ally South Korea and a crucial hub of the world economy, which lies just across the border from the North; this being the conundrum that serious military experts are currently wrestling with.

For the most part, the Rolling Stone story summarizes the work of previous journalists and researchers. These include reports by the Forward that established Gorka’s close ties in Hungary to far-right anti-Semitic forces in that country. Those forces include the Vietzei Rend, a group whose members are listed by the U.S. State Department as having been “under the direction of the Nazi Government of Germany” during World War II.” Members of the current day group have identified Gorka as having sworn a lifelong oath of loyalty to their nationalist organization, which remains devoted to the ideals of its founder, Hungary’s World War II-era ruler Miklós Horthy, a self-declared anti-Semite who collaborated with Hitler. Gorka denies he took an oath of loyalty to the group.

Rolling Stone also cited the Forward’s reporting on [Gorka’s support in Hungary in 2007 for a far-right militia](https://forward.com/news/national/367937/exclusive-controversial-trump-aide-sebastian-gorka-backed-violent-anti-semi/ https://forward.com/news/national/367937/exclusive-controversial-trump-aide-sebastian-gorka-backed-violent-anti-semi/) led by known anti-Semites. The militia, known as the Hungarian Guard, was later banned after some of its members were tied to a string of murders of ethnic minorities.

Despite this, Gorka’s spouse, Katharine Gorka, told Dreyfuss, “He has never in any way been associated with the far right,” she says. “One of the reasons why we left Hungary was because of Sebastian’s discomfort with the far right.”

Gorka himself declined to speak with the reporter.