Inside The Charlottesville Rally, Jews Targeted For Special Abuse 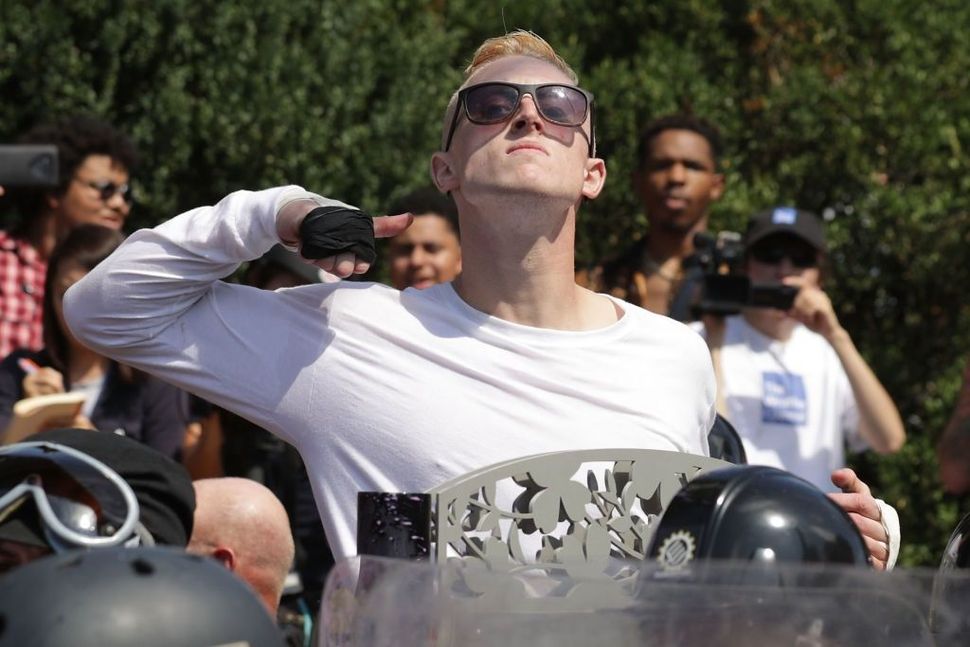 (JTA) — CHARLOTTESVILLE, Va. (JTA) — The white supremacists, for all their vaunted purpose, appeared to be disoriented.

The city of Charlottesville, thanks to pressure from the American Civil Liberties Union, had allowed them — 500 or so — their rally in Emancipation Park, or as they prefer to call it, Lee Park, to protest the city’s plans to remove from the park a statue of Confederate Gen. Robert E. Lee.

That worked for an hour or so on Saturday, and then the protesters and the counterprotesters started to pelt one another with plastic bottles — it was unclear who started it. There were gas bombs — mildly irritating — that seemed to come more from the white supremacists. And then the sides rushed each other headlong and there were scuffles.

So Virginia Gov. Terry McAuliffe declared a state of emergency and, heeding the police, the white supremacists filed out of the park and started walking, north, but to where no one seemed sure. There was talk of meeting at a parking lot, but which parking lot, no one was sure. As they approached the Dogwood Vietnam Memorial, a bucolic hill overlooking an overpass, they sputtered to a stop for consultations and did what marchers on a seasonably warm day do: They sat on the grass, sought shade and chatted.

I had been following at a distance with a handful of journalists and folks who were there not so much to counterprotest but to deliver an alternative message. Zelic Jones from Richmond bore a poster with a saying by Martin Luther King Jr., “We must accept finite disappointment, but never lose infinite hope.”

I climbed the hillock to see if anyone would be willing to talk; on the way, the marchers had studiously ignored reporters, but I thought, at rest, they might be more amenable. It was not to be. One man, wearing black slacks, a white shirt, sunglasses and black baseball cap, shadowed me. He moved to stand between me and anyone I had hoped to interview.

I looked him directly in the eye.

“My name is Ron,” I said. I hadn’t identified myself as Jewish.

“You want to talk?” I offered.

The exchange was jarring in how personal it was. I’ve been hated, directly, for many things (try being a journalist, anywhere), but it had been a while — I’d have to cast back to early childhood — since I’d faced visceral hatred just for, well, looking Jewish.

A year ago, I had attended at a hotel in Washington D.C. the unveiling of the alt-right, convened by one of its lead theorists, Richard Spencer, who was also in attendance in Charlottesville. Thatnews conference — an expression of white supremacy argued in plummy tones that disguised its hateful content — was at a remove from the hatred stalking Charlottesville’s streets Saturday. Spencer was polite and helpful after the fact. His ideas are toxic, but in the airless corridors of a Washington hotel, they seemed denuded of malice; they seem to be the imaginings of an intemperate toddler.

Here in Charlottesville, the hatred was present and real and would before the day ended apparently kill someone, when a car driven by a 20-year-old Ohio man plowed through counterprotesters.

Among the 500 white supremacists were men and women bearing signs like “Goyim know!” (Know what?) and “Jews are satans children.” There were Nazi flags. There were men all in black, t-shirts and slacks and army boots and helmets, jogging along with plastic shields. There were the men who sang of “blood and soil” as they marched to the Emancipation Park event. And when the white supremacists got their act together and gathered in McIntire Park, they shouted “Jew” every time the name of Charlotteville’s Jewish mayor, Michael Signer, was mentioned.

And of course, the hostility was not confined to Jews: As targets, Jews were not even preeminent; blacks were. There were the “White lives matter” t-shirts. Marching along McIntire Road, the white supremacists shouted out the N-word at drivers passing by. More prominent than the Nazi flags were the Confederate flags and their variants.

The focus on Jews was anomalous: This was supposed to be about the Confederacy and southern heritage, and defenders of the Southern Cause are not always identified with hostility toward Jews. An hour’s drive away, in Richmond’s Hollywood Cemetery, a Confederate monument, there’s a carefully tended Jewish section.

And yet here it was, the chants of “Jews will not replace us” (as?). I had two more personal encounters. At Dogwood Vietnam Memorial, a man in a floppy beige sunhat started following me and explaining to me the lie of the Holocaust, the evil of the Jews, the value of DNA in determining purity. I retreated as he ran after me, screaming, “My mother says I’m a Jew! My MOTHER! Does that mean I’m entitled to something?” (I resisted replying, “Your mother’s love.”)

And earlier, filing out of Emancipation Park, a group of youths surrounded and shouted at me, “Take that wall in Israel down! An open border for everyone!” — a reference to a popular theory on the far right that Jews are engineering open borders to bring the United States to ruination while keeping Israel pure. They moved on.

Anomalies like these tend to bemuse, at least me. What the racists believe to be hurtful jibes come across more as non sequiturs, as mouthings of the deluded or the possessed. Why “Shlomo” of all names? What was that about DNA? A wall in Israel?

And then, the car rammed the crowd, and there was a fatality, and some 35 injured, including five critically, and it was harder to pick out the absurd and use that as a way of keeping an emotional distance from the hate speech. I counted the wounded, rushed by stretchers into the back of ambulances, the less seriously injured patched up with torn cloths, leaning on friends’ shoulders and wincing.

I retreated to a cafe that was open only to clergy and press, dispensing free water and beer. I filed a story, and on the large wall TV CNN said President Trump was ready to speak.

The cafe fell silent; there was, it seems, even among this crowd of liberal clergy, a thirst for a message of unity from a president who has pledged, and more often than not failed, to lead us all.

Trump engaged in some throat clearing about the Veterans Administration, and then began, “We condemn in the strongest possible terms this egregious display of hatred bigotry and violence, on many sides.” At “on many sides” the room erupted into shouts of anger. On cue, Trump repeated, “On many sides.”

There was only one side visibly and overwhelmingly gripped by hate on Saturday in Charlottesville.

As the day wore on, the White House refused to retreat from Trump’s many-sides-ism, and Trump’s tweets didn’t add clarity.

“Condolences to the family of the young woman killed today, and best regards to all of those injured, in Charlottesville, Virginia. So sad!” was his last tweet of the day.

Inside The Charlottesville Rally, Jews Targeted For Special Abuse