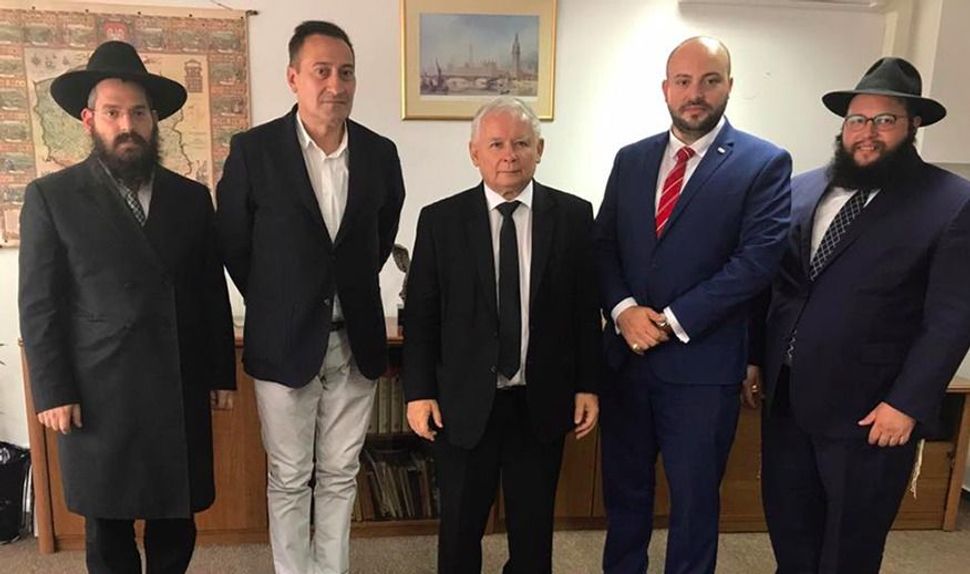 (JTA) — The president of Poland’s largest Jewish group accused other Jewish leaders of exaggerating the country’s anti-Semitism problem as part of a “political war” on the right-wing ruling party.

Artur Hofman, who heads the TSKZ cultural organization of Polish Jews, defended the government Wednesday during an interview with JTA about a meeting that he and two other Jewish activists had earlier that day with Jaroslaw Kaczynski, a founder of the Law and Justice Party.

The meeting and Hofman’s defense of Law and Justice offered a rare public indication of a split in the ranks of Polish Jewish leaders over relations with the government.

Two weeks prior to the meeting Leslaw Piszewski, the president of the Union of Jewish Communities in Poland, and Anna Chipczynska, head of the Warsaw community, sent a letter to Kaczynski saying Polish Jews are increasingly fearful due to rising anti-Semitism and government inaction.

Chipczynska told JTA last week that Polish Jews have reached a “low point” in their feeling of safety under Law and Justice. She and Chief Rabbi Michael Schudrich both said the ruling party was not doing enough to counter expressions of anti-Semitism. Chipczynska rejected Hofman’s allegations of partisanship and insisted that it is the duty of community leaders in Poland to speak out when they perceive a growing threat of right-wing radicalism and Jew hatred.

But Hofman disputed their claims after his meeting with Kaczynski, which was also attended by a Chabad rabbi and Jonny Daniels, founder of the From the Depths organization, which promotes the commemoration of the Holocaust in Poland.

According to Hofman, the conservative politician said that Poland’s government will confront anti-Semitism wherever it raises its head and that he found the community leaders’ letter “strange.” Hofman called the letter “stupid,” arguing that anti-Semitic incidents were rare in Poland. He said Poland is safer for Jews and friendlier to Israel than Germany, France, Sweden and most other European countries.

“The letter is part of a political war. Maybe these people from the Jewish community, they have other political positions, therefore they are looking for something to do against this party, which is now the ruling party,” Hofman said.

Hofman, whose organization has 1,200 members in 15 cities, also called the letter a “perversion” that he said was beyond “fair play.”

Poland has seen several mass protest rallies and an acrimonious public debate over conservative legislation and policies that Law and Justice has pushed since coming to power in 2015.

Chipczynska told JTA that far-right activity is on the rise in Poland, requiring more security for Jews and unsettling members of the community of several thousand.

“Maybe he is not exposed to it, due to the fact his activities are less community-oriented,” she said of Hofman.

Neither Chipczynska nor other elected leaders of the Union of Jewish Communities in Poland have met officially with Kaczynski, who some analysts believe to be the most powerful politician in Poland. Chipczynska said she remains hopeful that Kaczynski would find a time to meet with elected representatives of her community and “listen and address the community’s concerns.”

Both the tally of anti-Semitic incidents and total number of hate crimes are far lower than those recorded in France, the United Kingdom and Germany. Some of the difference may owe to underreporting of incidents in Poland by victims, Chipczynska said.

In January, a spokesman for the country’s National Police Headquarters, Mariusz Ciarka, told reporters that hate crimes had not risen in 2016 over 2015.