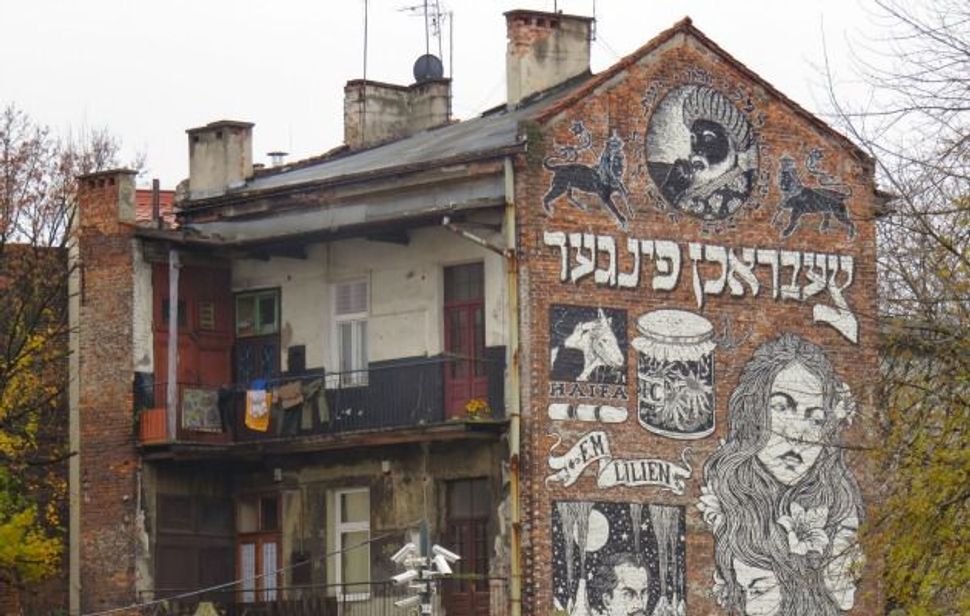 Street Art: Near the Jewish quarter in Krakow is this building covered with Art Deco-style graffiti. It says ‘broken finger’ in Yiddish. Image by Beth Kraft

(JTA) — For close to 30 years, leaders of Polish Jewry have been celebrating what they call the revival of their once-great community from near annihilation during the Holocaust.

On occasions like the opening of Jewish kindergartens and other communal institutions, often held up as the first since the genocide, activists note milestones, contrasting them with the preceding devastation, communist-era oppression or worrisome developments elsewhere in Europe.

“As Europe is becoming more difficult to be Jewish [in], Poland is going in the other direction,” one key promoter of Jewish life in Poland, Jonathan Ornstein of the Krakow Jewish Community Center, recently said in an interview. He invited readers to “see this amazing rebirth of Jewish life.”

Others waxed lyrical about local expressions of philo-Semitism, like an odd but well-meaning mock Jewish wedding that took place last month in Radzanow — few of the guests were actually Jewish.

“It’s amazing that this heritage created by 3.5 million murdered Jews is still relevant today,” Jonny Daniels, founder of the From the Depths group for Holocaust commemoration in Poland, said of the wedding.

But in recent weeks, this narrative has given way to warnings by communal leaders of resurgent and potentially violent anti-Semitism that they say is being tolerated, if not encouraged, by the nationalist government since it came to power in 2015.

In turn, other Polish Jews have dismissed these warnings as exaggerated and a partisan attempt to hurt the government.

The split within the community, observers say, leaves it open to government divide-and-rule tactics.

Those insisting that the ruling Law and Justice party is not doing enough to address a rise in anti-Semitism include the head of the Warsaw community, Anna Chipczynska; the president of the Union of Jewish Communities in Poland, Leslaw Piszewski; and the European Jewish Congress.

The problem, she added, is growing threats in far-right circles acting with impunity from the government, requiring communities to spend more on security and generating concern. She noted racist rhetoric online, anti-Semitic remarks by lawmakers and even Cabinet ministers, as well as expressions of revisionism by state historians.

Recent incidents include a statement by lawmaker Bogdan Rzonca of Law and Justice, an anti-immigration party, who wrote on Twitter, “I wonder why there are so many Jews among those performing abortions, despite the Holocaust.”

In July, Chipczynska co-authored with Piszewski, an open letter to a Law and Justice founder, Jarosław Kaczyński, protesting the perceived reality and asking for his intervention. It was the first such address by communal leaders and it mentioned 1968 – a year when state-sponsored anti-Semitism in communist Poland reached peak levels.

Last week, the European Jewish Congress escalated the rhetoric even further, expressing “grave concern over the dramatic rise in anti-Semitism in Poland.”

In a statement that featured some of his group’s most sharply worded remarks in years about an EU member state, the European Jewish Congress president, Moshe Kantor, added that the government has “closed it communications with representatives of the official Jewish community” and “stands out as an example of leadership that seems to have little interest” in dialogue.

But some Polish Jews, including elected communal representatives, disagree with those expressing “grave” concerns over anti-Semitism.

Artur Hofman, the president of the TSKZ Polish Jewish cultural organization, whose 1,200 members in 15 cities make it the largest Polish-Jewish organization in terms of membership, rejected both the claims of rising anti-Semitism in Poland and of government complacency toward it.

To Hofman, the letter by Chipczynska is part of a “political war” by some left-wing Polish Jews against the ruling party, he said.

Bitter disputes among Jewish organizations are not uncommon in former communist countries, where personal and ideological rivalries are often exacerbated by the competition for government subsidies and restitution funds. The rise of nationalism in Hungary, Russia, Lithuania and Ukraine has fueled similar feuds where politics complicate the fight against anti-Semitism.

But Poland’s Jewish community had managed to avoid such splintering — at least publicly — until earlier this year, according to Piotr Kadlcik, the previous president of the federation of Polish Jewish communities.

The split was on display on Aug. 17 when Hofman, Daniels and two Chabad rabbis met with Kaczyński, the ruling party official. Kaczyński has so far snubbed requests by other community leaders to meet. But he posed for a photo with Hofman’s group two weeks after receiving the accusatory letter co-authored by Chipczynska. After the meeting, which Hofman said was pleasant and earnest, Hofman defended the government and dismissed the allegations raised by Chipczynska.

“What anti-Semitism, what on Earth are they talking about?” he demanded. “In this country, I can walk around with a kippah anywhere I like, unlike in Berlin, Paris, Brussels. I go to Jewish cultural festivals in the middle of the street with no security. In France you would need an army battalion to give security.”

Chipczynska rejected any partisan motives in penning the letter and cited figures suggesting that hate speech and hate crime are on the rise in Poland.

While the claim is supported in some reports, it is challenged in others and by the government. Physical attacks on Jews in Poland are extremely rare. The total number of anti-Semitic incidents recorded there annually is no greater than a few dozen – a fraction of the tallies for several countries in Western Europe.

The meeting with Kaczyński, in which he said anti-Semitism is and will stay a fringe phenomenon, did little to settle the debate on the alleged rise in anti-Semitism in Poland. But it opened a new feud among Jews on who gets to meet with senior politicians.

After the meeting, representatives of 14 Jewish groups — including Michael Schudrich, the chief rabbi of Poland — signed a statement declaring that Hofman and the others present at the encounter represented no one but themselves. One communal leader, Sergiusz Kowalski, president of the Polish branch of the B’nai B’rith Jewish group, called the Jewish participants at the meeting “court Jews.”

“The transparent divide-and-rule tactic of senior leaders of the Law and Justice Party in seeking to choose its selected Jewish interlocutors over the heads of official and representative community organizations in Poland leaves us staggered and reminds us of much darker times in Europe when governments chose their Jews,” the group said.