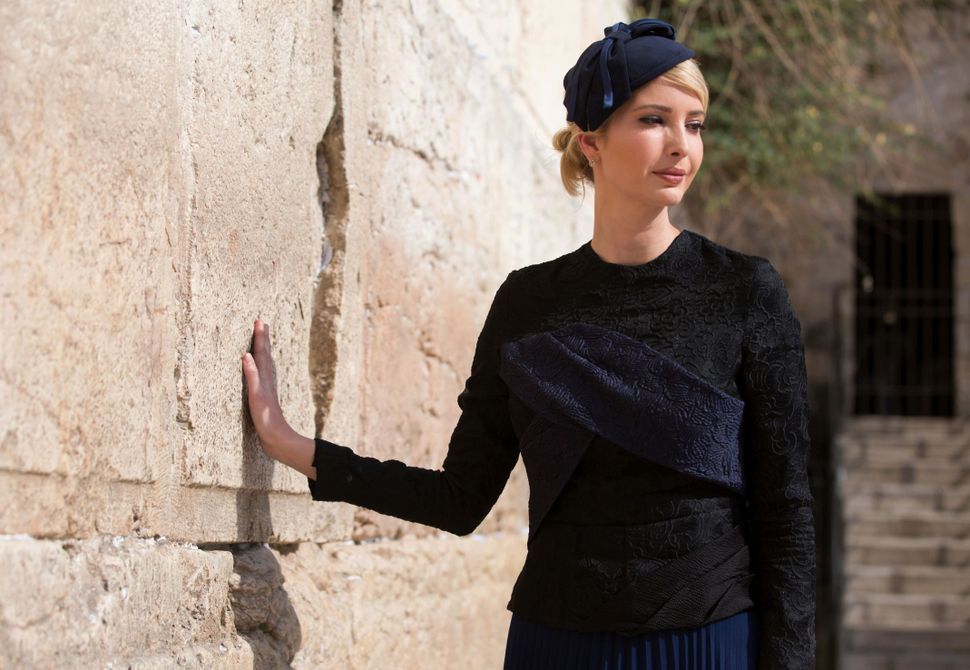 Ivanka Trump at the Western Wall, May 23, 2017 Image by Getty Images

(JTA) — This Jewish year was not a quiet one, to say the least. From the tumultuous first eight months of Donald Trump’s presidency, to a wave of bomb threats against Jewish community centers, to a neo-Nazi protest in Charlottesville that turned violent, to the twin weather catastrophes of Hurricanes Harvey and Irma, Jews, like so many others, found it hard to take their eyes off the news.

As the year 5777 comes to a close, JTA looks back at some of the moments that had the most significance for Jews, sorted below by date.

Bob Dylan is awarded the 2016 Nobel Prize in Literature.

In an unexpected move, the Swedish Academy bestowed the iconic Jewish American singer — born Robert Zimmerman — with the highly coveted prize in October. Though Bob Dylan’s fame is indisputable — he wrote some of the most well-known and culturally significant songs of the 1960s — the decision raised eyebrows because the prize has traditionally been given to novelists and poets, not songwriters. Dylan did not seem as enthusiastic as some of his fans: He took two weeks to acknowledge the award and said he was unable to travel to Sweden for the official ceremony, though he traveled there at a later date to accept the award and present the required lecture.

In December, the United Nations sharply condemned Israeli actions in a resolution calling settlements “a flagrant violation of international law” that damage the prospects of a two-state solution to the Israeli-Palestinian conflict. Traditionally, the United States has vetoed such resolutions — but in its waning days the Obama administration chose not to follow suit. The move prompted outrage from Israel, centrist and right-leaning Jewish groups and then President-elect Donald Trump, who called the resolution “extremely unfair.” Samantha Power, then the American envoy to the U.N., defended the abstention, saying the resolution was in line with longstanding U.S. opposition to Israeli settlements.

Trump takes office, bringing Ivanka and Jared with him.

Trump took office in January after his unexpected victory over Hillary Clinton in November, pledging in his inaugural address to put “America first.” The use of the slogan — the name of an isolationist and often anti-Semitic movement leading up to World War II — alarmed some Jews, but Trump said the phrase had no connection to the earlier usage. Trump brought with him a cadre of Jewish advisers, including his daughter, Ivanka Trump, and her husband, Jared Kushner. The couple, both of whom are observant Jews, would take on critical roles in the administration as senior advisers to the president, with Kushner in charge of a thick portfolio that included brokering a peace deal between Israel and the Palestinians.

JCCs in U.S. and Canada targeted with more than 100 bomb threats.

From January to March, Jewish community centers, Jewish schools and other institutions were hit with more than 100 bomb threats. None of the threats, many of which were called in, turned out to be credible, but they forced evacuations and spread fear among local communities. Several Jewish cemeteries were also vandalized, prompting some to blame the rise of the “alt-right” — some say the movement was legitimized following Trump’s election — for the threats. However, neither of the two men arrested for making the threats turned out to be motivated by far-right beliefs. One of the accused, Juan Thompson, was arrested for making bomb threats against eight Jewish institutions in the name of an ex-girlfriend in a revenge plot. The main suspect, however, turned out to be an Israeli-American teenager, Michael Kadar of Ashkelon, who was arrested for making hundreds of threats. Kadar reportedly sold his bomb threat services online and suffers from a brain tumor, according to his lawyer.

Trump shouts down reporters who ask him about a rise in anti-Semitism.

In February, the president shouted at two journalists who asked him about an increase in anti-Jewish sentiments and incidents, and said he “hates” being called an anti-Semite, although neither reporter called him one. After asking for a “friendly” reporter, Trump interrupted a question by a haredi Orthodox journalist — he accused him of lying about his intentions — and claimed to be the “least anti-Semitic person that you have ever seen in your entire life.” Trump’s response drew criticism from Jewish groups, many of which had already criticized him a month earlier for releasing a statement on International Holocaust Remembrance Day that notably did not mention Jews. His defenders said the president’s critics were politically motivated.

Trump paid a visit to the Jewish state on his first overseas trip as president in May, which also included stops in Italy and Saudi Arabia. The two-day trip included a stop at Yad Vashem and meetings with Prime Minister Benjamin Netanyahu and President Reuven Rivlin, as well as Palestinian Authority President Mahmoud Abbas. Trump, accompanied by his daughter Ivanka and her husband Jared Kushner, also stopped at the Western Wall for a private visit, making him the first sitting U.S. president to visit the holy site and earning him high praise across Israel. A few months after the visit, Trump dispatched a team of top aides, including Kushner, Jason Greenblatt and Dina Powell, to visit Israel and other Middle Eastern countries in an attempt to revive peace talks.

A June decision by Netanyahu’s Cabinet to put a hold on the creation of an egalitarian section of the Western Wall, a deal passed in 2016, drew the ire of American Jewish leaders. Some leaders, also angered by the advancement of a bill to give the Orthodox Chief Rabbinate complete control of conversions performed in Israel, warned of a growing schism between American Jews and Israel. Natan Sharansky, the chairman of the Jewish Agency for Israel, also joined critics of the decision, saying it “will make our work to bring Israel and the Jewish world closer together increasingly more difficult.” In August, the Israeli Supreme Court said the government must either reinstate the agreement or provide an explanation as to why it had put a hold on it.

In June, a Chicago lesbian march ejected three women for carrying Gay Pride flags with Jewish stars, saying the march was “anti-Zionist” and “pro-Palestinian.” The decision drew heated debate, and the Jewish reporter who first wrote about the incident for a Chicago LGBTQ newspaper said she was removed from her reporting job as a result of the article. The Dyke March controversy — as well as similar debates about the role of Zionists in the feminist movement and whether demonstrators could bring banners with Jewish stars to a Chicago feminist march — illuminated a growing challenge for Zionist Jews who feel unwelcome in liberal spaces.

Neo-Nazis and white supremacists gathered in a Virginia park in August to protest the removal of a statue of Confederate Gen. Robert E. Lee. The far-right protesters chanted anti-Semitic and racist slogans, including “Jews will not replace us,” and brawled with counterprotesters. One counterprotester, Heather Heyer, was killed when a suspected white supremacist rammed his car into a crowd. Trump waffled on condemning the protest, calling out neo-Nazis and white supremacists in one remark, but blaming both sides for the violence at other times, and saying there were “some very fine people” in both groups. Jewish groups, lawmakers from both sides of the aisle and the president’s top economic adviser, Gary Cohn, criticized Trump for his response, saying he was not doing his part to condemn hate.

Homes were flooded and lives were turned upside down as Hurricane Harvey hit Texas in August, forcing mass evacuations across the state. Over 70 percent of the city’s Jews live in areas that experienced high flooding, and synagogues, schools and other Jewish community buildings sustained significant damage. Recovery from the hurricane is expected to take years, but the disaster also served as a point of coming together for the community, as Jewish groups rallied to distribute donations and local Jewish camps offered housing to those with nowhere to go.