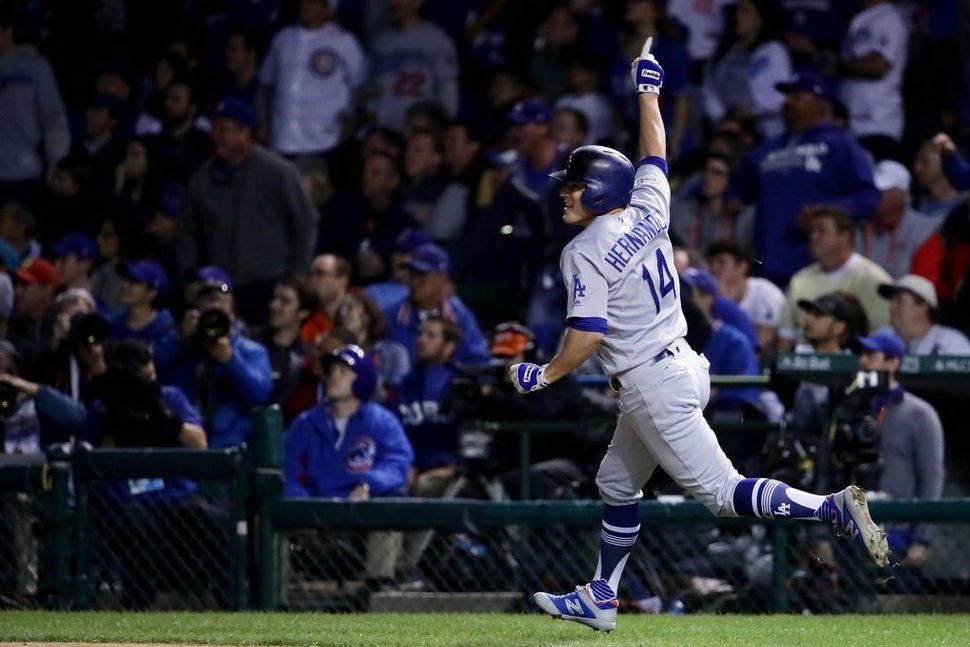 (JTA) — Thursday night was rough for a Chicago Cubs fan like myself. After watching my beloved team win the World Series last year — the team’s first championship in 108 years, mind you — I was hoping to see the talented young squad do it again.

Sadly, it was not to be.

Things already weren’t looking good for the Cubbies going into Thursday night’s game against the Los Angeles Dodgers, the fifth in this year’s National League Championship Series. Chicago had lost the first three games in the best-of-seven series, and their Game 4 win did not produce much hope.

And then came Game 5, in which the Dodgers absolutely crushed the Cubs 11-1, cementing a place at the World Series, which begins next week.

But last night was doubly awful for another, unexpected reason.

After Dodgers left-fielder Enrique Hernandez hit a grand slam in the third inning — making it nearly impossible for the Cubs to recover — a strange phenomenon took over my Twitter and Facebook feeds: It seemed like suddenly every Dodgers fan had suddenly turned into an overt anti-Semite, posting some variation of the word “kike” (usually with a capital “K”).

It was jarring, to say the least. But after some googling, I learned that Hernandez usually goes by his nickname, Kiké (pronounced “KEE-kay”). Kiké is a common nickname for Enrique, which itself is a common name for Puerto Rican men like Hernandez.

When reading the name in English, that accent over the “e” is pretty essential — otherwise it doubles as a derogatory, racist name for Jews. The accent, which is not typically used in Spanish spellings of the name, first started to appear in Hernandez’s name during broadcasts when he was in the minors. “Teams started using it to avoid controversy,” Hernandez has said. “If you don’t read it in Spanish, it can be offensive.”

This all makes sense, of course. Nevertheless, seeing my social media feeds filled with excited exclamations of “Kike!” was upsetting — especially in the current political climate, in which neo-Nazis can be seen marching in the streets of American cities chanting, “Jews will not replace us!”

Hernandez would go on to make history as the first player to hit three home runs and record seven runs batted in during a league championship series game — so, naturally (and rightfully!), his name buzzed around the internet through Friday morning.

As for me, now that I’ve recovered — somewhat — from last night’s disastrous game, I’ve realized what the real problem is: Not enough Americans know how to type out the accent mark -– known as a tilde in Spanish — on their computers or phones. But there are easy fixes for that. No matter what types of devices you use, here’s what you need to know:

If you’re typing on a Mac computer: Hold option, then hit e. The accent mark will appear over a blank space, and then all you need to do is type the letter you want it to appear over. Voilá.

If you’re typing on an iPhone: Hold down the vowel you’d like to use until a window pops up with every accent mark available to you. (Ever wish to type “coöperation” the way the New Yorker does? That’s how!)

If you’re typing on an Android phone: Same as iPhone, hold down the vowel until a window pops up.

And there you have it. With the addition of one simple step, we could be well on our way to world peace. Or, if not quite world peace, at least fewer panic attacks from Jewish people every time Kiké Hernandez scores a run.

As for the Cubs… well, there’s always last year.