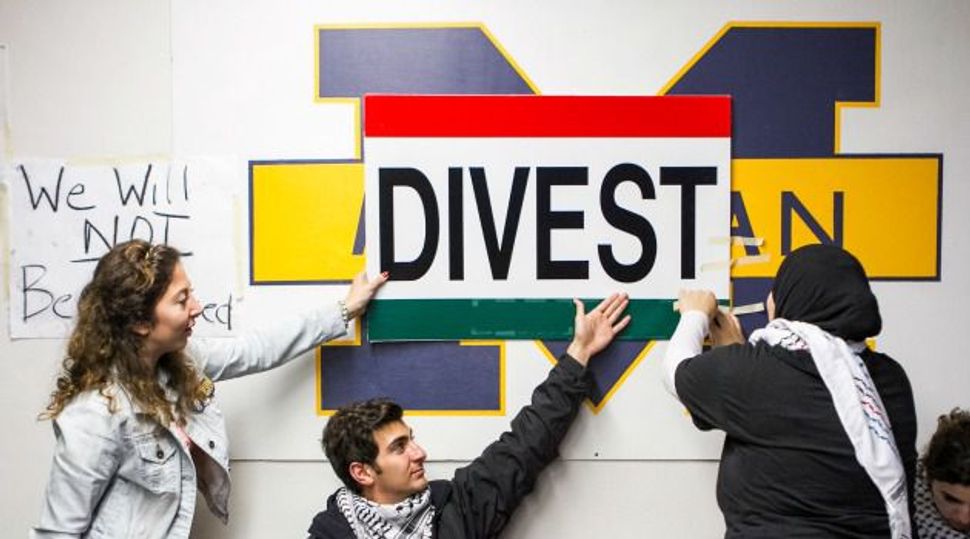 The student government at the University of Michigan passed a resolution early Wednesday morning that for the first time called on the school to investigate divesting from companies that do business in Israel, a possible watershed moment at a school with notably large Jewish and Arab-American populations.

The vote, which passed 23-17 with five abstentions, was the first time an Israel-related divestment resolution had passed the UM student government in 11 attempts dating back to 2002. In a change from normal procedure, the vote was conducted by secret ballot. History professor Victor Lieberman, who during hearings in previous years had testified to the student council about the history of the Israeli-Palestinian conflict, was not approved as a speaker this year, which prompted cheers from pro-divestment students, The Michigan Daily reported.

All told, the hearing on the resolution lasted eight hours — reportedly the longest in student government history — and stretched until 3:00 a.m.

The resolution, crafted by members of the group Students Allied for Freedom and Equality, claimed that companies like Boeing, Hewlett Packard and United Technologies contribute to violence against Palestinians because of their business relationships with the Israeli Defense Forces. The resolution calls on university administrators and the Board of Regents to appoint a committee to investigate the ethical implications of investing in those companies.

It is unlikely that the university itself will fully follow the student government’s directive. No university has ever divested from Israel or Israeli-tied companies as a result of a boycott, divestment and sanctions (BDS) campaign. University president Mark Schlissel has stated his opposition to the BDS movement, telling the Detroit Jewish News in 2014 that “it’s the wrong thing to do — whether you agree or disagree with the politics and decisions made in any country.” And the university’s investment policy only approves the creation of a committee called for by the student government in cases that “express the broadly and consistently held position of the campus community over time” — which is unlikely to apply in this case given the contentiousness of the issue and the long time it took for pro-divestment students to succeed.

But this may be of little comfort to Jewish students who opposed the resolution. Senior Ari Spellman said at the hearing that divestment had brought divisiveness to campus.

“I believe that people should have an appropriate place to share their opinions; nonetheless there is a limit to everything and I felt my line was crossed,” Spellman said. “The concerns of other divestment students are acknowledged and respected by other universities, so why aren’t they respected here?”

But senior Hafsa Tout said that the resolution would give voice to an underrepresented minority group. “I understand the very deep connection many, many students have with Israel,” Tout said. “I want to emphasize over and over again that this resolution emphasizes the voices of Palestinian students … and to give this community a voice for the first time in CSG history is to not take away from any other community.”