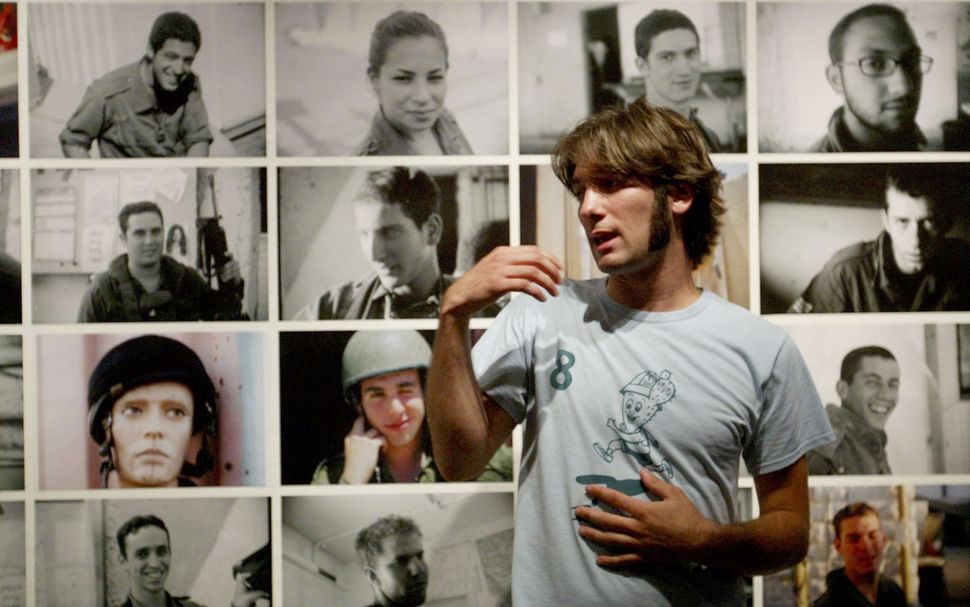 TEL AVIV (JTA) – Imagine for a moment that a soldier is suspected of misconduct in the field.

Typically, someone might be expected to report the soldier, prompting the army to investigate. The soldier might deny any wrongdoing.

Well, in Israel, a recent case unfolded in almost exactly the opposite way. A soldier admitted to beating a passive Palestinian, and his fellow soldiers and a police investigation declared he was lying.

The story of the soldier, Dean Issacharoff, reflects the divisive politics here surrounding Israel’s conflict with the Palestinians. For Issacharoff and his dovish supporters, his account was a rebuke of the occupation. But many others, from the prime minister down, heard it as a betrayal of his fellow soldiers and his country.

Issacharoff is not just any soldier. He is the spokesman for Breaking the Silence, a much-maligned nonprofit that opposes Israel’s military occupation in the West Bank. The group publishes Israeli veterans’ testimonies regarding alleged human rights abuses by the army in the Palestinian territories.

Issacharoff gave his account of beating the Palestinian at a Breaking the Silence rally in April. He told the crowd that in 2014, during his army service in the West Bank, his commander ordered him to handcuff the man, who had thrown rocks at Israeli soldiers as part of a protest and was passively resisting arrest.

Issacharoff said that in front of his platoon, he “began to knee him in the face and chest until he was bleeding and dazed,” and then dragged him to detention.

“As a soldier, I never knew how to deal with someone who resists nonviolently,” he explained.

Breaking the Silence is frequently vilified by Israeli politicians and is generally unpopular with the public. Two of the main criticisms of the group are that most of the testimonies it publishes are anonymous and that it appeals to foreign audiences for support rather than limiting its work to Israel.

Issacharoff, an officer in the Israel Defense Forces reserves, spoke to Israelis without concealing his face or name. The backlash was swift.

In May, Reservists on Duty, a group that works to counter Breaking the Silence, published a video in which former members of Issacharoff’s platoon, including his commander, called him a liar. Soon after, the group called for him to be investigated.

In June, Justice Minister Ayelet Shaked, a member of the pro-settler Jewish Home party, asked the attorney general to open a probe into the incident, which he did. Later that month, police questioned Issacharoff on suspicion of assault.

Authorities tracked down the Palestinian they said Issacharoff arrested. While the man confirmed he was arrested at the time in question, he said he did not face violence. Based on that and other evidence, the State Attorney’s Office on Thursday closed the investigation into Issacharoff, concluding the alleged assault never happened.

Shaked welcomed the finding as confirmation that Isacharroff is a liar who is “defaming the State of Israel in front of the world.”

“Kudos to his comrades in his company who refused to remain indifferent and were unwilling to remain silent while he lies,” she said Thursday. “It is good that the truth has come to light about this organization, which is making money at the expense of IDF soldiers and Israeli citizens.”

Prime Minister Benjamin Netanyahu tweeted a similar sentiment Thursday, saying that “Breaking the Silence lies and slanders our soldiers internationally. Today, in case anyone had any doubt, this fact has received further proof. The truth wins.”

Issacharoff begged to differ. In a video published to social media Friday, he repeated his story and challenged the government to resume the investigation, which he said was politically biased.

“Why do you think they did not take the testimony of Ruben, the company commander’s assistant who was standing right next to me while I kneed the Palestinian?” Issacharoff asked. “Perhaps it is because it did not fit the conclusion that the prosecution knew Ayelet Shaked wanted to receive?”

Breaking the Silence has stood by Issacharoff and accused the government of seeking to silence critics of the occupation.

“What began under the political direction of the minister of justice became a political investigation that came to a tendentious and political conclusion,” said Avner Gvaryahu, its executive director.

The group declared in a statement Saturday that that the attorney general had investigated the wrong incident. Breaking the Silence said Issacharoff had just seen a photo of the Palestinian whom police interviewed and responded that it was not the same man he assaulted.

Police insisted they got it right.

Regardless of how the saga ends, Breaking the Silence — a small and marginal advocacy group based in Tel Aviv — has already attracted an outsized amount of attention. The group has courted controversy since it was founded in 2004 by dovish Israeli soldiers who had recently finished serving during the second intifada, a bloody Palestinian uprising.

In 2015, then-Defense Minster Moshe Yaalon banned the group from speaking to active-duty soldiers, calling its work “hypocrisy and false propaganda.” At the same time, Education Minister Naftali Bennett barred the group from appearing at schools.

Netanyahu, who repeatedly has railed against Breaking the Silence, last year backed the passage of a controversial law requiring special reporting by nonprofits that receive most of their funding from abroad, which mostly included human rights groups. This year he has pushed for stricter legislation that would shut down any organization that seeks to harm the army or try its soldiers in international courts.

In April, Netanyahu canceled a meeting with Germany’s foreign minister because the visiting diplomat planned to sit down with Breaking the Silence and another Israeli human rights group. In a statement, his office said he does not meet with foreign diplomats who “lend legitimacy to organizations that call for the criminalization of Israeli soldiers.”

Even many Israelis who oppose the occupation sympathize with such moves. The army is generally seen as a bulwark against the country’s myriad enemies, and sweeping criticism is taboo, especially before foreign audiences. Also, most Israelis perform mandatory military service after high school, and when they hear criticism of soldiers’ actions under difficult circumstances, they think of themselves, or their children or grandchildren.

In April, when Israeli soldier Elor Azaria shot a downed Palestinian terrorist in the West Bank city of Hebron, a majority of Israelis supported his actions, according to public opinion polls, and he was widely referred to as “our son.” He is now serving a 14-month prison term.

On Saturday, Issacharoff’s mother reminded Israelis that he, too, is a soldier and a son. In a Facebook post that included a photo of him in uniform, she urged Israeli officials “to immediately stop using incendiary and hateful language against any soldier who risked their lives for years to protect their country.”

“Such words undermine any respectful public discussion and are inciteful,” she said.