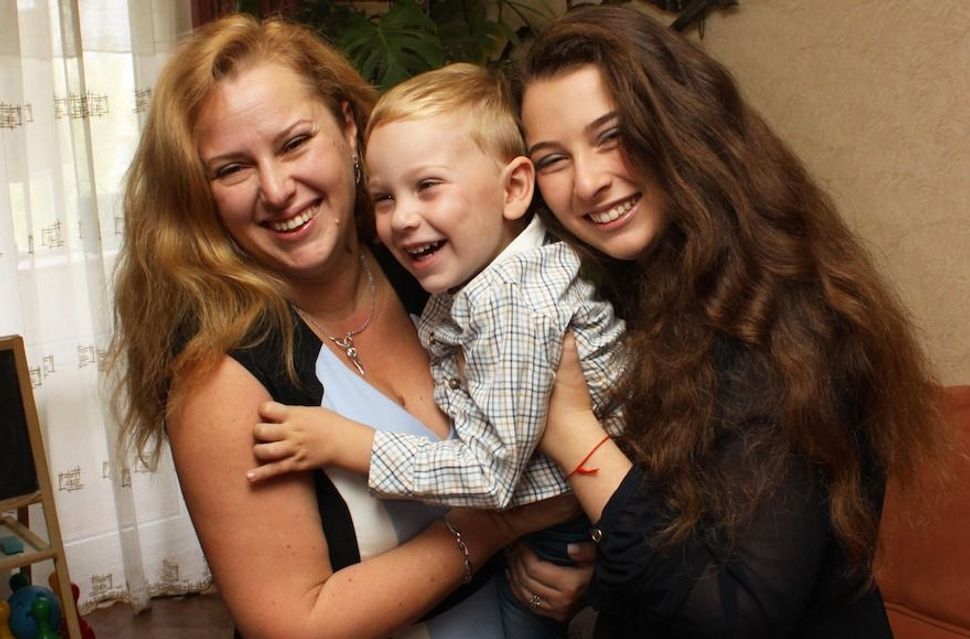 (JTA) — For a man to gallantly open a door for a female stranger is neither common nor universally appreciated in Ukraine, where gender salary gaps used to be illegal and female tank crews fought the Nazis.

Throughout the former Soviet Union, the communist revolution instituted far-reaching gender equality at a time when women in some Western countries, including the United States, were not yet allowed to vote.

Indeed, the first time that International Women’s Day, which is March 8, was declared a national holiday was in the Soviet Union, in 1918. It was later adopted by the United Nations in 1975, but it remains to this day a bank holiday in several post-communist countries. (It’s also the only day when holding a door for a strange woman on the street or giving her flowers is guaranteed not to invoke any negative reaction.)

With the collapse of communism, so did government enforcement of gender equality in the workplace, resulting in Western-style wage gaps. Although overshadowed by its grim human rights record and repressive state machinery, communism’s feminist agenda seems to have had a particularly strong and lasting effect in unexpected places — including on the leadership of the sizable Jewish minority of the former Soviet Union, or FSU.

In Europe today, the only national Jewish communities with female presidents – there are three among more than 20 – are from FSU countries. A woman also presides over the Jewish community of Warsaw, Poland.

The dominant role of women in leadership of Eastern bloc communities is especially pronounced in the FSU operations of the American Jewish Joint Distribution Committee, or JDC. Both the regional directors for Eastern and Central Europe of JDC are women, with other women heading Jewish community centers and other key facilities for JDC across the region — including Kiev, Odessa, Budapest and beyond.

This reality is only partly rooted in communism, according to Anna Grigolaya. She’s a 42-year-old mother of two from the city of Dnipro, in eastern Ukraine, who works as JDC’s resource development manager in that region, which has more than 100,000 Jews.

Women, she said, stepped up to lead Jewish communities in the East not only because they were roughly as educated and experienced as men by the time the Soviet Union had collapsed, but also because “they were the keepers of Jewish tradition when it was suppressed.”

In the absence of synagogue-based spiritual life in the former Soviet Union, “Jewish life happened at home, at family events,” Grigolaya said. In the domestic sphere, which is dominated by women in many societies, “women were the guardians of Judaism” in the absence of rabbis, she suggested.

“So naturally when communism ended, women took up key positions in the effort to rebuild Jewish community life from scratch,” she said.

Grigolaya’s parents used to take her as a child to the home of her grandparents, where the family would have Passover seders. However, to avoid persecution, no one told her that they were having a seder, or even that she was Jewish, Grigolaya recalled.

“Only much later I realized what those strange dinners were, where my grandparents would read a book that I didn’t find interesting as I waited until they’d decide we’re finally allowed to eat,” she said.

Women’s centrality to JDC’s eastern operations began immediately after the collapse of the Soviet Union, according to Asher Ostrin, the organization’s senior executive for international affairs. Becoming a JDC staffer then was a “risk,” he said, because it was a foreign operation whose inner workings were largely unknown in the region and one that is dependent on foreign funding.

Women, who had already “predominated in work settings like medicine, education, and social services,” Ostrin said, rose to the challenge “despite its risks.” They possessed “the talents and skills, were less risk averse in their career choices, and displayed a passion, and bravery, for creating Jewish life that was hard to find at that time,” he added.

In the post-communist age, wage gaps in Ukraine, Russia and other countries quickly went from nonexistent to pronounced.

Following Ukraine’s 2013 financial crisis, the gap jumped from a disparity that was slightly lower than the 27 percent in the United States to 41 percent in 2015 for the same level positions, according to the news portal Rabota.

With the loosening of the rule of law after communism, a massive industry of human trafficking and sex work developed in several post-communist countries, whose victims are almost exclusively women. Countries like Romania, Bulgaria and Moldova are preferred destinations for sex tourists, with local pimps sending other women to the Middle East and Europe to work as sex slaves.

Meanwhile, the rise of Muslim extremism in some parts of the former Soviet Union has resulted in the resurgence of phenomena that were suppressed during communism, including nighttime curfews for some women, honor killings, child marriages and female illiteracy.

But this resurgence of inequality has been relatively mild in FSU Jewish communities, where women mostly are expected to study and excel professionally.

“I do feel to a large extent equal in my professional life and my Jewish community,” Grigolaya said. “And from what I see in the world today, I think this is extremely fortunate.”