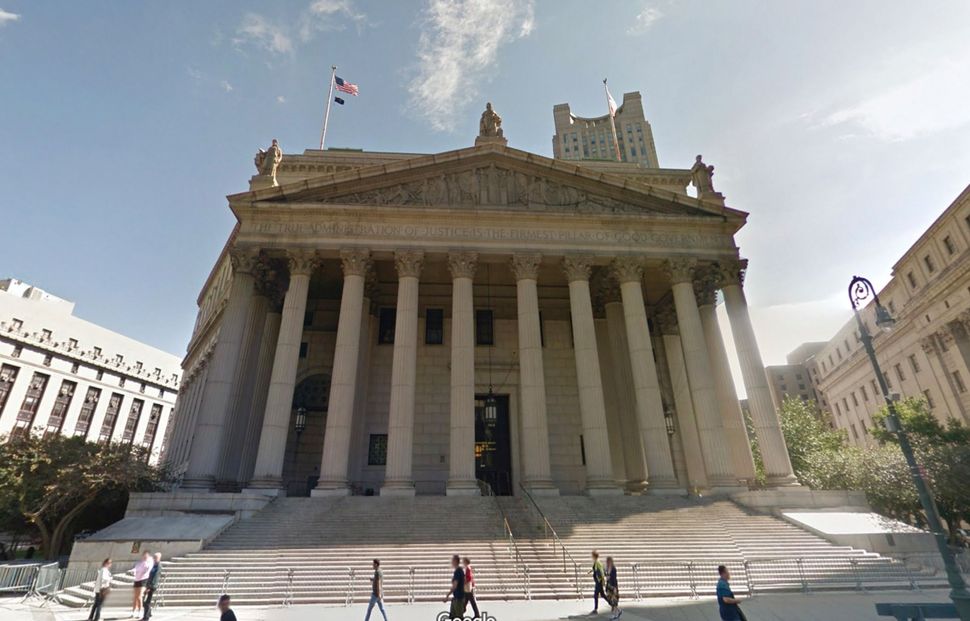 WASHINGTON (JTA) — The Trump administration sided with the Palestine Liberation Organization in a terrorism lawsuit the Supreme Court may soon consider, drawing an angry rebuke from conservatives, including one of its most steadfast Jewish community defenders, the Zionist Organization of America.

In 2015, a federal jury in Manhattan ruled in favor of victims injured in six terror attacks that occurred in Israel in 2002-2004, handing down a $656 million decision against the PLO. An appellate court overturned that decision a year later.

The Trump administration’s argument “hurts the American terror victims, aids and comforts terrorists, and makes them less concerned about facing consequences for their hideous actions,” said a March 7 statement by Morton Klein, the ZOA president, and Susan Tuchman, the director of the ZOA’s Center for Law and Justice.

The Supreme Court will say by March 29 whether it will consider the appeal by the litigants in the case, known as Sokolow v. Palestine Liberation Organization.

The lead plaintiff, Mark Sokolow, told JTA in an interview that he was shocked by the solicitor general’s filing. He noted that the Obama administration had intervened on behalf of the PLO in 2015, persuading the District Court to substantially lower the bond — usually the equivalent of the judgment, in this case $656 million — which allowed the PLO the resources to file its appeal.

The Obama administration argued then that the award would cripple the ability of the Palestinian Authority to function, which would pose a risk to U.S. interests in the region.

“We did not think anything along those lines would come out of this administration,” Sokolow said, citing President Trump’s invocations of “America first” when it comes to foreign policy.

(The Obama administration withheld funds commensurate with the payments to Palestinian attackers; the bill Trump backs would cut almost all funding to the Palestinians.)

On the other hand, Trump is deeply invested in a bid led by his son-in-law, Jared Kushner, to revive Israeli-Palestinian peace talks.

Sokolow, his wife and two of his daughters were injured in a suicide bomb attack in Jerusalem in 2002 that killed an 81-year-old man. His fellow plaintiffs are families of victims of terrorist attacks in Israel that killed 33, including several Americans, and wounded over 450. Their suit argued that the late PLO Chairman Yassir Arafat had paid attackers and their families.

They were suing under the Anti-Terrorism Act, which allows American victims of international terror attacks to sue for damages in the U.S.

Francisco’s filing touched on issues of preserving the executive branch’s prerogative to intervene in such cases in order to protect American foreign policy interests — the core argument of the Obama and Bush administration’s interventions in the lawsuit, launched in 2004. But most of it turned on technical constitutional arguments.

The PLO is entitled to due process, the solicitor general argues, because it qualifies as a “person” under U.S. law. The filing also argues that the presence of two PLO offices in the United States does not meet the test of establishing the PLO as a legitimate U.S. target for litigation. It also argues that the terrorists would not have necessarily known that some of the casualties were American, which mitigates another application of U.S. law, that allows lawsuits against entities that deliberately target U.S. interests.

The legalities drew special ire from critics of the filing. “The United States has in effect assented to the jurisdictional hurdles imposed by the Second Circuit, which will prevent many if not most victims of international terrorism from suing to hold their terrorist attackers accountable,” said the ZOA.

In October 2017, Republican and Democratic  lawmakers in both chambers of Congress urged the solicitor general to support Sokolow’s appeal. Rep. Kathleen Rice, D-N.Y., initiated a letter in the U.S. House of Representatives signed by 67 Republicans and Democrats.

Sen. Chuck Grassley, R-Iowa, who helped author the 1992 Anti-Terrorism Act which underpins the plaintiffs’ case, initiated a letter signed by 23 senators of both parties. Rice is Sokolow’s representative in the House. Grassley a year ago joined a number of other senators in filing an amicus brief in the case; the House has also filed an amicus brief.

Lawmakers have yet to weigh in on the solicitor general’s filing, but cries of outrage are already reverberating in conservative media, usually a redoubt of Trump support. Joel Pollak, a top editor at Breitbart news, scored an exclusive interview with Jeff Sessions, the attorney general, and asked tough questions about Francisco’s filing.

“The question some of [the plaintiffs] have raised is why the Trump administration is taking the opposite side from them — why it’s fighting their attempt to claim damages from the Palestinian government. Is there any prospect of a change in that policy?” Pollak asked.

“Those present very difficult legal questions,” he said. “And our team is working on it. So I will have to get back with you on the status of that case.”

Brian McNicoll, a columnist on the conservative Townhall website, chided Sessions and Francisco: “Doesn’t it seem like the administration of the most pro-Israel president in a generation might be interested in winning justice for Americans injured or killed by terrorists?”

James Glassman, a top State Department official in the George W. Bush administration, wrote in a Op-Ed for The Hill that siding with the PLO in this case would not help advance the peace process. “In fact, it is counter-productive,” he said. “Imposing actual, financial costs on those who use and support terrorism is the right way to achieve peace.”