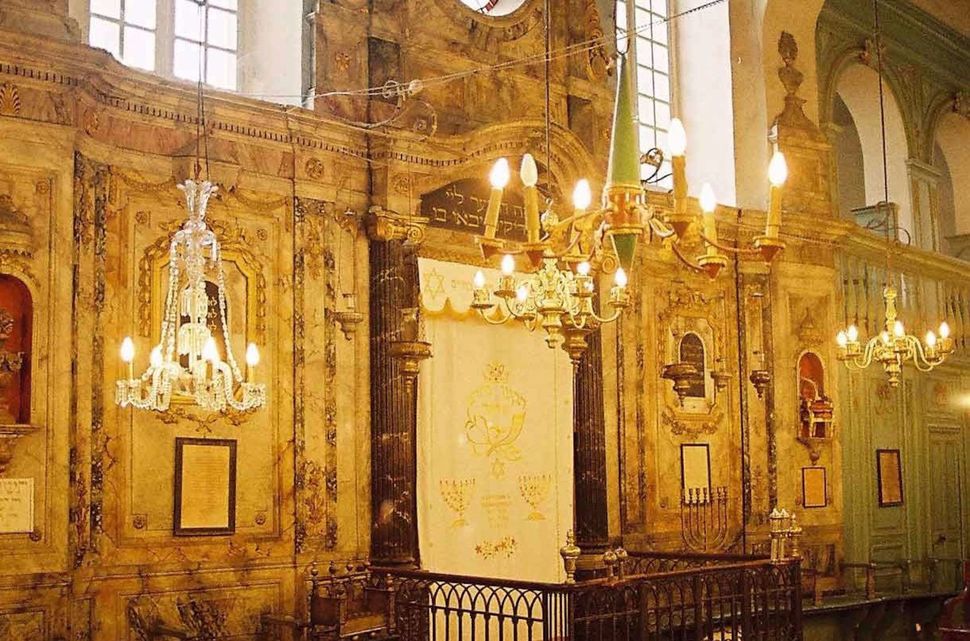 (JTA) NEUILLY-SUR-SEINE, France (JTA) — If French Jewry is facing an existential threat because of anti-Semitic violence, then little of the drama is on display in this affluent and heavily Jewish suburb of Paris.

At a time when other areas of the Paris region have soldiers guarding fortified synagogues and patrolling streets with many Jewish residents for fear of Islamists, the busy shul of Neuilly (pronounced no-ee) is unguarded.

Congregants, some wearing kippahs on the street, will even hold the synagogue door for strangers to save them the trouble of ringing the buzzer. This densely populated municipality of 65,000 near the Arc de Triomphe in Paris also has several Jewish schools with long waiting lists, eight kosher shops and at least as many kosher restaurants.

Its synagogue receives so many worshippers that it has two prayer cycles each morning – one for the early risers and another at 9 a.m.

“Americans think that life’s impossible here for a Jew. But they’re wrong,” Remi Toledano, a 52-year-old local businessman and father of three teenagers, told JTA in the synagogue.

“Frankly it’s not an issue here. Jewish life is booming in this vibrant community, which is growing and constantly attracting new members,” he added.

While this may be true, the growth in Jewish life in Neuilly and other parts of western Paris is not unconnected to France’s problem with anti-Semitic violence.

As the proliferation of assaults and terrorist attacks is prompting thousands of Jews to leave France, the same threats are forcing an even greater number of them to abandon at-risk areas for safe havens like Neuilly — generating what appears like an unlikely Jewish renaissance amid one of the community’s worst crises since World War II.

This movement began long before the explosion of anti-Semitic incidents in France, which in the early 2000s jumped from several dozen a year to hundreds. As Jewish immigrants to France from North Africa improved their financial situation, they moved to wealthier areas from blue-collar suburbs where thousands of Jews had settled along with Muslim immigrants.

But that process was greatly expedited with the advent of violent anti-Semitism, which watchdog groups say is predominantly perpetrated by Muslim extremists, and the emergence of a wave of jihadist attacks after the 2012 slaying of four people at a Jewish school in Toulouse.

Labeled “internal aliyah” — from the Hebrew for immigrating to Israel — this second wave comprises approximately 60,000 out of France’s 500,000 Jews who have moved in the past decade alone from at-risk neighborhoods mostly to western Paris, according to what the National Bureau for Vigilance Against Anti-Semitism, or BNVCA, told the France Culture radio station last month.

This internal aliyah virtually emptied Jews from suburbs like La Courneuve, where 4,000 Jews had lived only 25 years ago. Back then, the synagogue of this crime-infested suburb, where prostitutes and drug dealers ply their trade in main traffic arteries in broad daylight, was too small to always accommodate all of its worshippers. Today the local rabbi struggles to put together a minyan – the quorum of at least 10 men necessary for some prayers in Orthodox Judaism.

In Saint-Denis, another rough and predominantly Muslim suburb north of Paris that once had many thousands of Jewish residents, approximately 100 Jewish families now hold on to a synagogue that is regularly attacked. Police assess the area to be so at-risk that they installed permanent roadblocks on the synagogue’s street, which they cordon off during Jewish holidays.

Many Jews from such areas are among the 26,000 French Jews who moved to Israel since 2013 — nearly three times the number who made the move in the previous five years.

But the losses in these areas have not only provided population gains to Israel, but also to northwestern Paris and especially areas in that region like Neuilly, Levallois-Perret, the capital city’s 17th District and Ternes.

“When I came here 10 years ago, there were two kosher restaurants,” Murielle Gordon-Shor, the 17th District’s deputy mayor, told France Culture. “I’ve seen new kosher businesses open: shops, butcher shops, there are 15 of them now, in addition to tiny synagogues. On Shabbat people walk on the street with Jewish symbols, there’s no problem.” Gordon-Shor is Jewish.

David Dahan, 39, moved to Neuilly with his wife in 2007 after suffering repeated anti-Semitic harassment on the streets of the 18th District, a heavily Muslim and major crime area located a mile east of the 17th.

“I didn’t want our kids growing up in that sort of atmosphere,” Dahan, who has three children younger than 10, said of his previous neighborhood.

Dahan sends his two oldest children to a heavily guarded Chabad school in Aubervilliers, which is an impoverished suburb bordering Saint-Denis.

But to less observant parents, part of Neuilly’s charm is that it is one of the few places in the Paris area where Jewish children can attend public schools without fear. Once French Jews’ solution of choice, those institutions have since become largely “no-go zones” for Jews because of anti-Semitism, according to Francis Kalifat, president of the CRIF umbrella group of French Jews.

But in Neuilly, “that’s not a problem,” said Ben Baron, a 48-year-old textile trader whose two teenage children both attend Lycée Pasteur, a public institution considered to be one of France’s best high schools.

After all, he explained, “Jews make up, what, a third of the student body, I think. The anti-Semites would be the ones with the problems if they start.”

To Michael Azoulay, the rabbi of Neuilly, this reality is a key factor in how “Jewish life is bursting at the seams” here.

“Between Jewish and non-Jewish schools, there’s so much choice for Jews here, and it means that we have a very diversified community,” he said. “Sometimes it’s a challenge to balance members’ various needs, but ultimately it’s why we are so vibrant.”

In an atmosphere of relative safety, and with a healthy balance between devout and more liberal congregants, Neuilly several years ago became a trailblazing congregation in that its synagogue under Azoulay hosts regularly groups of women who read aloud from the Torah.

Frowned upon by some conservatives, a similar event that was not even held at a synagogue provoked outrage in Marseille. The Marseille event, co-organized by the same female Talmudist who leads the women’s prayers in Neuilly, prompted a rabbinical decree of condemnation, threats and insults that made the Jewish community center there regret that it hosted the event.

In an inclusive community that seems like an island in time from a period predating the explosion of anti-Semitic violence in France, it’s easy to see why Baron feels at home in Neuilly.

But even he says that his children “have no future here.”

Neuilly, he explained, “is a greenhouse, a safe space and a great place to raise Jewish kids. But when my children grow up, they’ll leave and start circulating in France, the country. And France … well, it’s not Neuilly.”