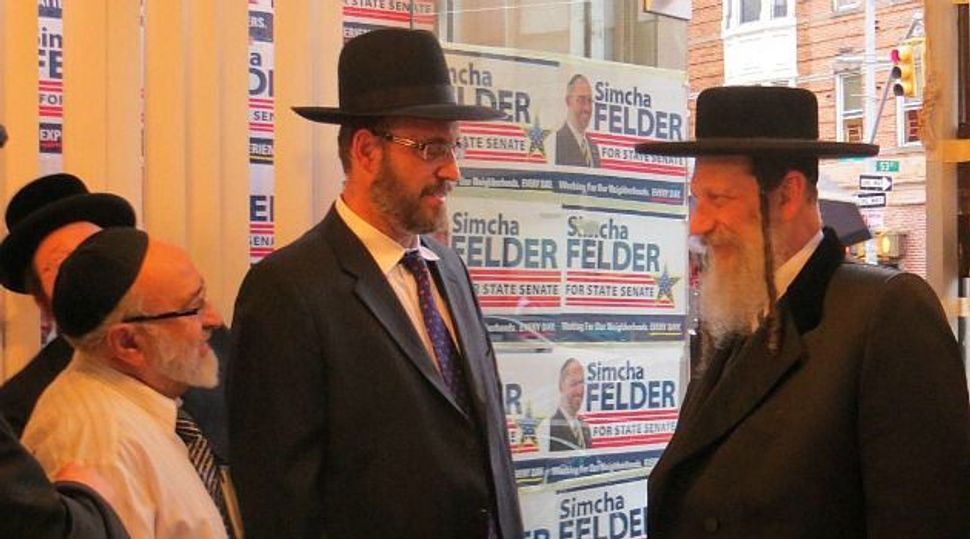 Changing Times: Grand Rabbi David Eichenstein, a Brooklyn Hasidic spiritual leader meets with state Senate candidate Simcha Felder. Such overt political activity was once unheard of for the ultra-Orthodox. But things are changing. Image by jdn pictures

Rogue Brooklyn Senator Simcha Felder and the Republican Party have kept their hold on the New York state legislature even though Democrats won special elections on Tuesday.

The Democrats are trying to take control of the state legislature and the Bronx and Westchester races they won might have made the difference, but then Felder, a Democrat, said he would continue to caucus with the Republicans, giving the party a one-vote edge in the upper chamber and Felder a powerful swing vote.

The near takeover was made possible after Gov. Andrew Cuomo brokered a deal on April 3 for eight breakaway Democrats to stop caucusing with Republicans and rejoin the party. But all that politicking may been for naught. Felder said he decided to stay with the Republicans to prevent chaos just before the summer recess.

The razor-thin majority — Democrats already control the State Assembly — could also give Felder more leverage as a swing vote on important legislation. He showed that he’s willing to use it when he held up the $168 billion state budget to soften state oversight of yeshiva curricula. Felder represents the heavily Orthodox 17th District in the southern part of Brooklyn.

“I always try to do what is best for my constituents and New Yorkers,” Felder said in a statement Tuesday afternoon.

“With only 25 days remaining in this year’s legislative session, I believe it is my obligation to prevent an unprecedented and uncertain late session political battle that will only hurt my constituents and New Yorkers. Political gamesmanship must not be allowed to jeopardize the leadership, committee structure and staff of the New York State Senate and push this institution into turmoil. Upheaval and court battles among partisans is not the preferred method of governing.”

Westchester was expected to be the swing district — and another bellwether on voter enthusiasm for the party in the suburbs — and Assemblywoman Shelley Mayer delivered, handily beating Republican Julie Killian in the 37th district by more than 10 points.

The move will give the Brooklyn senator more power, as both parties must continue to court his support on big votes, potentially setting up similar situations to the budget fight when he was able to negotiate a carve-out for his yeshiva deregulation proposal.

Cuomo brokered the deal to bring the IDC back after facing an unexpected primary challenge from celebrity education activist Cynthia Nixon.

Nixon has criticized Cuomo from the left and championed legislation popular with progressives, including legalizing recreational marijuana use in the state.

The governor then moved quickly to bring the rebel Democratic caucus back and announced a bill on Monday to ban plastic bags in the state — just a little more than a year after he blocked a five-cent surcharge in the city.

That could give Felder even more bargaining power as the governor is forced to balance between mollifying progressives during the primary and having to potentially cut deals with the Brooklyn senator over legislation he is pushing.

The senator could become the key vote if Cuomo decides to push full marijuana legalization in an effort to snuff out one of Nixon’s main platform policies.

And Felder even hinted at having both sides court him during the summer.

“This issue is best resolved outside of the legislative session and I look forward to revisiting it after session,” Felder said.

“I have great respect for my colleagues on both sides of the aisle and this institution. I intend to work with all of them in the remaining days of session and move the people’s work forward in an effective and orderly manner.”

Looks like someone may be getting some personal calls from Cuomo on his vacation.

Ben Fractenberg is a reporter and photographer based in New York City.