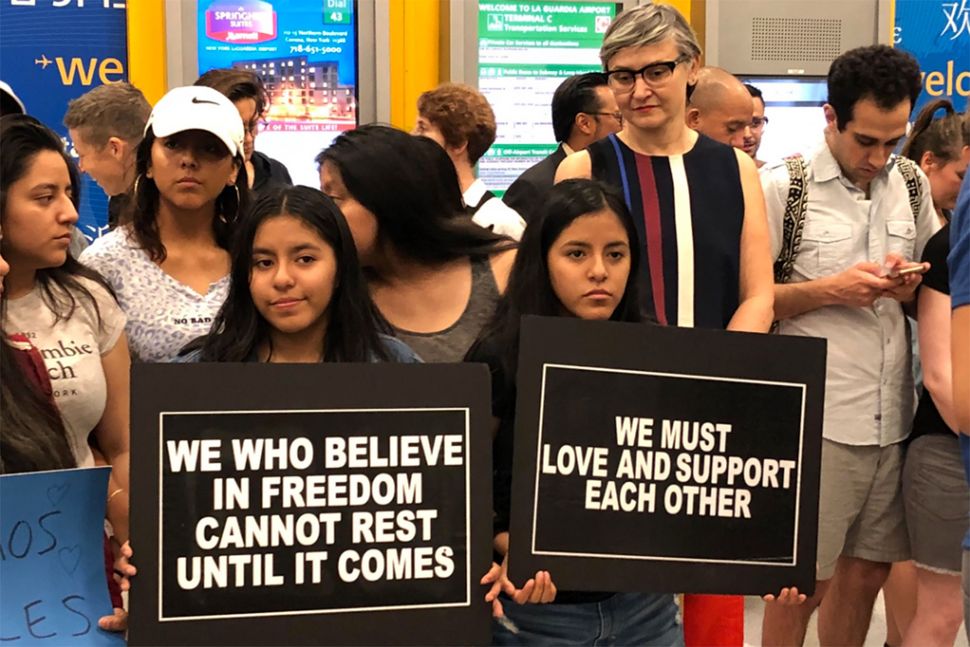 Video showed immigrant supporters, led by groups including the progressive Jewish organization Bend the Arc, standing outside of a terminal while singing the Civil Rights-era song “Ain’t Gonna Let Nobody Turn Me Around” and holding signs withe messages like “Los Queremos” (“We Love You”). Hundreds of migrant children, some as young as 9 months old, were already being held at a Harlem foster care facility — though it was not clear if the children arriving at the airport were being sent to the same facility.

Ain’t gonna let nobody turn me around…

Keep on walking, keep on talking, marching on to Freedom land.

Bearing witness at LaGuardia and showing children separated from their families that they are not alone. @UNITEDWEDREAM @MaketheRoadNY pic.twitter.com/xZfdVeNZdK

Trump reversed part of his “zero-tolerance” immigration policy after a large publicly outcry, including people in the Republican establishment like former first lady Laura Bush.

But it was not until his daughter and advisor Ivanka Trump urged him to rethink separating families that the president signed the order on June 21.

Advocates told some media outlets they saw some children arrive around 9:30 p.m. City Councilman Jimmy Van Bramer told the Forward he was home getting ready for bed when he got an urgent text message from Make the Road leader Javier Valdez that they were organizing an “emergency” action at the airport after seeing social media posts from passengers who said they spoke with separated children on planes.

Van Bramer then hopped a cab over to the airport to join the protesters.

“It’s devastating because there are moments where you are standing there getting emotional because you can’t believe this has happened to us. And this has become part of our country,” the city lawmaker said.

There were additional rallies planned for June 21. A coalition of progressive Jewish planned to hold a vigil outside the federal Immigration and Customs Enforcement building at 26 Federal Plaza at 6 p.m.