Booker: I Didn’t Know Sign I Held With ‘Palestine’ On It Was Pro-Palestinian 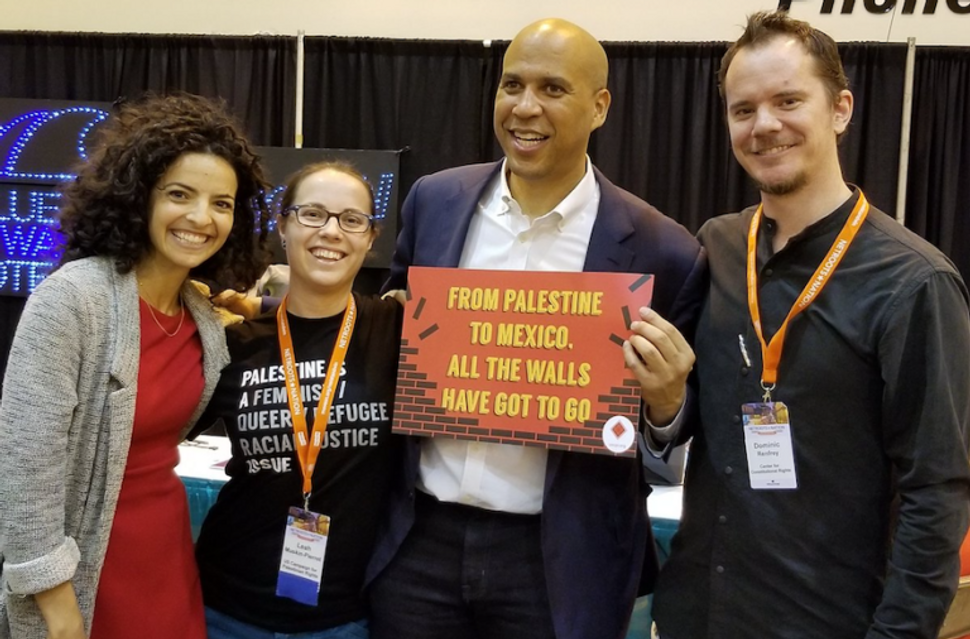 Sen. Cory Booker is shown posing with attendees at the Netroots Nation 2018 conference in New Orleans, August 2018. Image by @US_Campaign/Twitter

WASHINGTON (JTA) — Sen. Cory Booker, seen as a likely contender for the 2020 Democratic presidential nomination, appears in a photo appearing to endorse a slogan of the pro-Palestinian movement.

A Booker spokesman told JTA the senator had no idea the sign had anything to do with Israel.

Booker, a New Jersey Democrat who is known for his closeness to the Jewish community, is seen posing while holding a sign reading “From Palestine to Mexico, all the walls have got to go” and depicting a crumbling brick wall. The slogan was coined by the U.S. Campaign for Palestinian Rights, which posted the photo Friday on Twitter.

A spokesman for Booker, Jeff Giertz, said Booker believed the sign referred only to Mexico.

“Just before delivering a speech in New Orleans, Senator Booker was approached by dozens of people for photos,” Giertz told JTA in an email.

“In one instance, amid the rush, he was posing for a photo and was passed a sign to hold – he didn’t have time to read the sign, and from his cursory glance he thought it was talking about Mexico and didn’t realize it had anything to do with Israel,” Giertz said. “He hopes for a day when there will be no need for security barriers in the State of Israel, but while active terrorist organizations threaten the safety of the people living in Israel, security barriers are unfortunate but necessary to protect human lives.”

The Twitter post said the photo, in which Booker poses with three other people, was taken at the Netroots Nation conference taking place this week in New Orleans. Booker is shown posing with Leah Muskin-Pierret, the government affairs associate of the U.S. Campaign for Palestinian Rights, a group that endorses the Boycott, Divestment and Sanctions movement targeting Israel. She is shown wearing a shirt with a pro-Palestinian slogan.

Supporters of Israel reject comparisons between the Israeli security barrier – which they credit with virtually ending terrorist attacks within Israel – and a wall on the Mexican border largely seen as a bid to stop immigration overall.

Palestinians oppose Israel’s security barrier, which in many instances takes the form of a wall, because it cuts through the West Bank instead of running along the 1967 border and inhibits travel for Palestinians.

Israeli Prime Minister Benjamin Netanyahu stirred outrage from Democrats in 2017 when he favorably likened another Israeli wall – on the border with Egypt – to Trump’s proposal.

Booker, the former mayor of Newark, New Jersey, has for years been a favorite speaker at Jewish and pro-Israel groups. He has studied Jewish texts since joining the L’Chaim Society while attending Oxford University.

In 2015, the founder of the L’Chaim Society, Rabbi Shmuley Boteach, broke with Booker over his support for the Iran nuclear deal.

“Ending security assistance to our closest ally in the Middle East at a time when Israel faces new threats emanating from Syria and continued aggression from Iran and its proxies would undermine stability in the region and harm our own national security,” he said at the time. “The United States and Israel have a history of unprecedented cooperation on the basis of shared ideals and democratic principles. [Curtailing funding] would dramatically undermine our enduring commitment to Israel’s security and the historic ties between our two nations, jeopardizing a peaceful and stable future.”

Booker: I Didn’t Know Sign I Held With ‘Palestine’ On It Was Pro-Palestinian