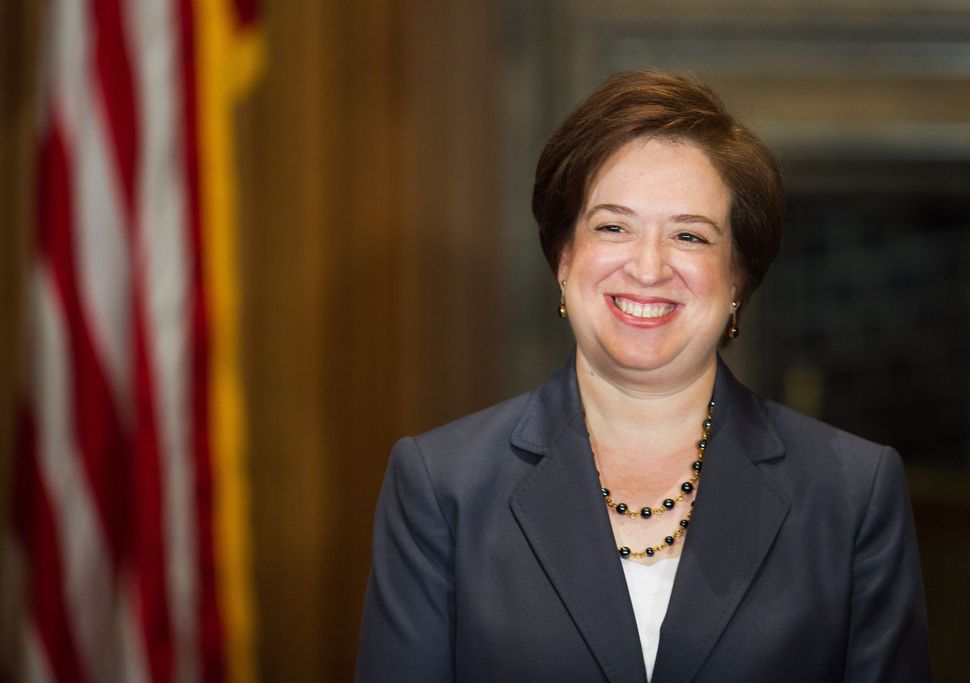 Elena Kagan smiles after she is sworn in as a Supreme Court Justice. Image by Getty Images

NEW YORK (JTA) — Supreme Court Justice Elena Kagan, appearing at a Jewish day school in Brooklyn, spoke about her Jewish background and how her family jumped from synagogue to synagogue.

“I had a very strange Jewish upbringing actually,” Kagan, 58, told journalist Dahlia Lithwick, who moderated the Wednesday evening conversation. “You would think Lincoln Square Synagogue, she comes from a Modern Orthodox family. Actually my family didn’t really know what it was.”

Though Kagan had her bat mitzvah at that Modern Orthodox synagogue on Manhattan’s Upper West Side, she did not grow up in a strictly observant household, the associate justice told an audience of about 280 at the Hannah Senesh Community Day School.

Kagan said her mother grew up in “an extremely, extremely religious family,” but had abandoned many aspects of Jewish observance by the time she had children.

Before Lincoln Square, the family were members of B’nai Jeshurun, which belonged to the Conservative movement (today the congregation is unaffiliated) and Congregation Rodeph Sholom, a Reform synagogue.

Kagan said she “loved” attending Hebrew school at Lincoln Square, but hit a snag when she realized the synagogue, then led by Rabbi Shlomo Riskin, had not allowed a girl to have a bat mitzvah ceremony.

“It was 1973 and they’d never done such things, and it was this kind of process of negotiation to try to get them to even get it into their heads that this was a possibility, and it was sort of a disappointment because I didn’t get to do all the stuff my brother had done,” she said.

In the end, Kagan had a bat mitzvah ceremony on Friday evening rather than the typical Saturday morning, and chanted from the Book of Ruth instead of the haftarah and Torah portions.

“It was a little bit not exactly what I wanted,” she said. “But I have to say that they came a super long way even to do that in those days at that sort of synagogue, so I give them a lot of kudos for that.”

At the day school event, Kagan noted that she is one of three Jewish justices now sitting on the Supreme Court (Ruth Bader Ginsburg and Stephen Breyer are the others). Some thought that President Barack Obama would not nominate Kagan in 2010 because she would be the third Jewish justice on a nine-member court, she said.

“As far as I know it never came up in the decision-making process that he used, and it really never came up as I went through the process that leads to confirmation, so I think it’s something that’s kind of a great thing,” Kagan said.

The jurist mostly skirted political topics at Wednesday’s discussion, but she did address what she described as a “danger” for the Supreme Court today. In the recent past, Kagan said, the court has been seen as split between the left and right, with one jurist in the middle.

The Senate Judiciary Committee is holding hearings on the nomination of Brett Kavanaugh to the seat recently vacated by the swing voting Anthony Kennedy. Kavanaugh would be President Donald Trump’s second appointment to the court and represent an expected 5-4 conservative majority.

Kagan, who is part of the court’s liberal wing, worried about a court being seen as merely political, especially in the big cases that “people care about.”

“I do think it’s a dangerous thing,” she said, if “it really does seem like the divisions follow ineluctably from political divisions and one side is winning.”