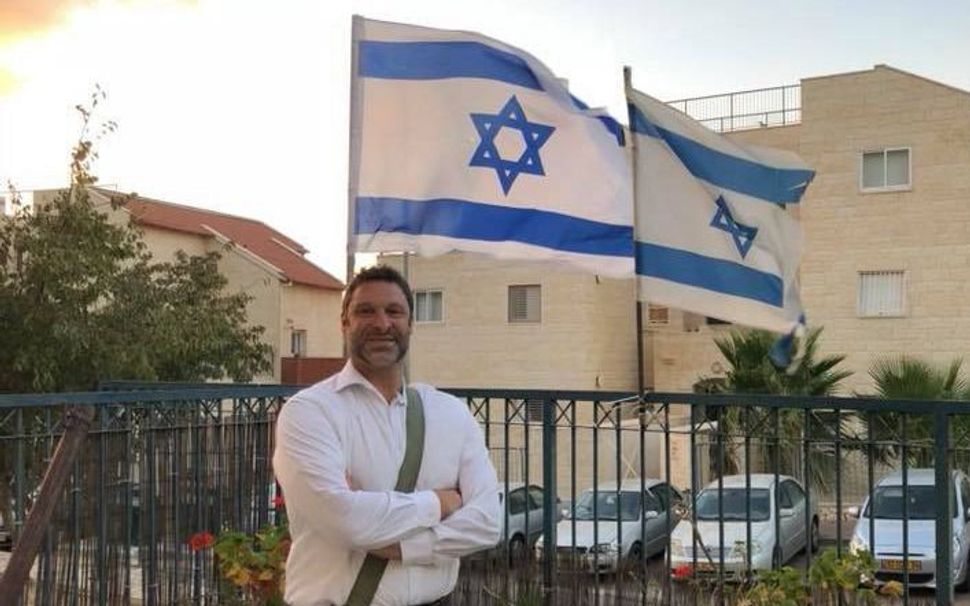 The funeral began at close to midnight on Sunday, less than a day after Fuld, a 45-year-old father of four, was stabbed to death by a teenage Palestinian assailant outside a shopping mall near Efrat, the West Bank town in the Etzion bloc where he lived. Fuld, a dual American and Israeli citizen, chased after his attacker and shot him before falling to the ground. He later was declared dead at a Jerusalem hospital, after resuscitation efforts failed.

“I don’t know how I will go on without you,” said Fuld’s widow, Miriam, said in one of many eulogies delivered by family members at the funeral. “We were born 24 hours apart from one another. We didn’t know it would end like this. You fought for what you believed in. I promise to take care of the children. Your job is to look after us from above.”

“You were always running towards danger instead of away from it and your never backed down from a fight because you knew you were in the right,” she also said. “You fought for what you believed in. You’ve left behind a legacy for the entire world to savor, videos and stories that we will be telling for many years to come.”

The funeral at the cemetery in the Kfar Etzion settlement lasted for over four hours, with mourners, many of whom waved Israeli flags during and after the ceremony, returning home in the early hours of the morning.  Many called him a “lion of Israel,” a play on his name, which means lion.

“Zion cries and the land of Israel cries. Ari influenced thousands of people all over the world,” his father said.  “He was so strong, he was so full of life. He celebrated every moment, every breath. How that voice can be silent?” He added: ““He gave his life to sanctify God, to sanctify the land. If you would have asked him, that’s way he would have said he wanted to go.”

Fuld worked for Standing Together, a nongovernmental organization that provides support for Israeli soldiers. He was well known for his social media posts defending Israel and its military. He was scheduled to leave in the coming weeks on a speaking tour in the United States. In addition, he reportedly was about to launch a new Israel advocacy website in English.

Several lawmakers and government ministers attended the funeral, many of whom had visited the family during the day prior to the funeral. He was a member of the National Union party, which is part of the Jewish Home Knesset faction.

He also was eulogized on social media and in newspapers in Israel.

“Israel lost a great hero today but not really. We didn’t lose him. He’s just been moved to a new position. Maybe you could say he’s been promoted. He’s now a Guardian. He was always one who guarded Israel, now he watches over us from above,” blogger Paula R. Stern wrote in a post on Facebook. She added: “I’d rather live in a country that will lose an Ari Fuld – which means we were blessed to have had him, than live in a country where their best hero of the day is a sniveling, worthless coward who can only manage to attack someone by stabbing them in the back.”

“Ari and I had our disagreements, and he would argue his points with firmness, clarity and strength,” former Knesset member Dov Lipman wrote in an appreciation piece in the Jerusalem Post. “He believed that he had to convince me to change my mind, and did not want to finish the debate with a ‘let’s agree to disagree.’ In certain cases, he believed that my stance was dangerous for the state and people of Israel, and he would continue pressing to win me over – Ari would not let me get away without answering his pointed and poignant questions.”

“I met with the wonderful parents and brothers of the great Israeli hero Ari Fuld ז״ל. I hugged them in the name of the entire nation in this time of terrible grief. We are alive thanks to heroes like Ari. We will remember him forever,” Israeli Prime Minister Benjamin Netanyahu tweeted on Sunday before the funeral.

Israeli soldiers on Monday raided the home of teenage Palestinian assailant Khalil Jabarin, 17, in the village of Yatta near Hebron. The soldiers measured the home in preparation for demolishing it, standard practice for the homes of terrorists who murder Israelis.

The home reportedly is slated for demolition despite the fact that the teen’s parents told Palestinian and Israeli security forces about their son’s plans to commit a terror attack.

Haaretz cited a source close to the Jabarin family as saying that the teen informed his parents that he planned to carry out an attack at the Tomb of the Patriarchs in Hebron. He was not found near the tomb, and then carried out the attack near Efrat.