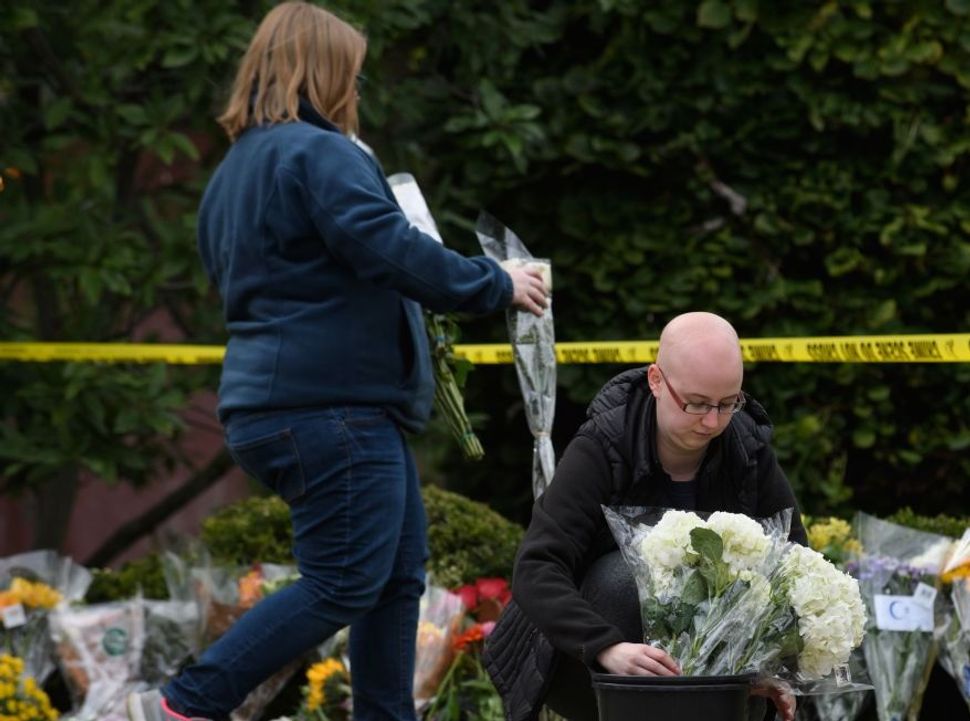 Some 2,500 people gathered on Sunday at a memorial service for the 11 Jewish worshipers slain in their Pittsburgh synagogue during Shabbat services, a mass murder the mayor called the city’s “darkest hour” while exhorting mourners to “defeat hate with love.”

Several speakers addressing an overflow crowd at the University of Pittsburgh’s Soldiers and Sailors Hall sounded themes of inclusion and unity, in counterpoint to the rise of toxic political discourse widely seen as creating an atmosphere conducive to violence.

“What happened yesterday will not break us. It will not ruin us. We will continue to thrive and sing and worship and learn together and continue our historic legacy in the city with the friendliest people that I know,” Rabbi Jonathan Perlman told the interfaith audience.

Three members of his congregation were among those killed when a man armed with an assault rifle and three handguns on Saturday stormed the Tree of Life temple in the city’s heavily Jewish Squirrel Hill neighborhood yelling “All Jews must die” as he opened fire on worshipers.

In addition to the 11 mostly elderly victims who were killed, six people, including four police officers, were wounded before the suspect was arrested. Two of the surviving victims remained hospitalized in critical condition.

The massacre marked the deadliest attack ever on America’s Jewish community, according to the Anti-Defamation League and Jewish Council for Public Affairs.

Robert Bowers, 46, who has a history of posting anti-Semitic messages online, has been charged under federal hate crime statutes, and could face the death penalty if convicted.

“This is the darkest hour in our city’s history,” Mayor Bill Peduto declared during Sunday’s service. “But here’s another thing about Pittsburgh. We are resilient. We will work together as one. We will defeat hate with love. We will be a city of compassion and we will be welcoming to all people,” he said to cheers.

The auditorium of the Soldiers and Sailors Hall, a venue that seats more than 2,300, was filled to capacity with hundreds more people gathered outside the building.

She was among five of the slain who lived in Squirrel Hill, a quiet, leafy district with a large Jewish population. The community also was home to the late Fred Rogers, whose long-running children’s television show “Mr. Rogers’ Neighborhood” featured lessons on friendship and kindness.

The remaining victims were from other parts of Pittsburgh, the second-largest city in Pennsylvania after Philadelphia.

The mass shooting sparked security alerts at houses of worship around the country and condemnation from politicians and religious leaders.

Some complained that the confrontational, nationalistic rhetoric of U.S. President Donald Trump has encouraged right-wing extremists and fed a surge in activity by hate groups.

Trump, who quickly branded Saturday’s shooting an act of pure evil and called on Americans to rise above hatred, was already facing similar criticism ahead of the Nov. 6 congressional elections following a spate of pipe bombs mailed last week to some of his most prominent critics. The targets, mostly Democrats, included former U.S. President Barack Obama.

“Honestly I think this president’s whole modus operandi is to divide us. He gets up in the morning with new and inventive ways to divide us,” U.S. Representative Adam Schiff, a California Democrat who is Jewish, said on CNN’s “State of the Union” broadcast on Sunday.

Trump told reporters the killings might have been prevented if there had been an armed guard. Synagogue officials said police would only normally have been present for security on high holidays.

The mayor said on Sunday that keeping guns out of the hands of irrational people was a better way to prevent violence.

FBI Special Agent Robert Jones told a news conference he did not know why Bowers had targeted the Tree of Life synagogue.

Authorities believe the suspect entered the synagogue, opened fire on worshipers and was fleeing when he encountered a police officer, Jones said. The two exchanged gunfire, he said, and Bowers reentered the building before a police tactical squad arrived.

Bowers surrendered and was taken to a hospital where he was listed in fair condition with multiple gunshot wounds.

Bowers’ virulent anti-Semitic views were evident in prolific online postings. In one, early on Saturday, he wrote that a Jewish refugee group, the Hebrew Immigrant Aid Society, “likes to bring invaders in that kill our people. I can’t sit by and watch my people get slaughtered. Screw your optics, I’m going in.”

He is due to make his first court appearance on Monday afternoon before a federal judge in Pittsburgh.—Reuters