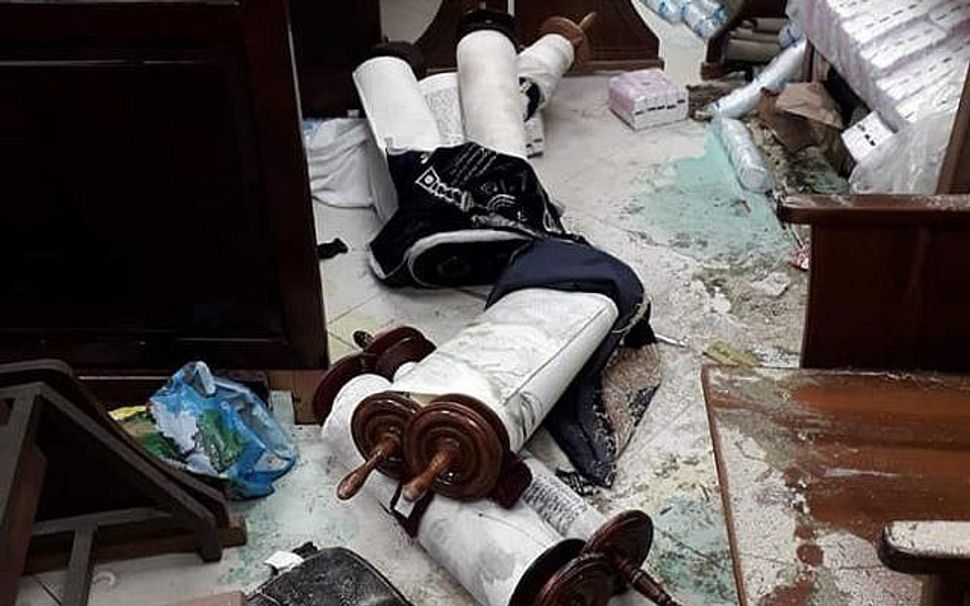 Torah scrolls were vandalized at a Jerusalem synagogue. Image by Facebook

JERUSALEM (JTA) — Vandals broke into a Jerusalem synagogue and tossed four Torah scrolls on the floor.

The break-in took place in the Kiryat Yovel neighborhood on Monday night. Worshippers arrived on Tuesday morning and found the Torah scrolls, prayer books and other Jewish artifacts strewn all over the floor.

A hole was cut in the side of the ark that housed the Torah scrolls in order to remove them.

The synagogue, called Siah Yisrael and populated mainly by immigrants from France, does not have any security cameras.

The attack was condemned by both of Israel’s chief rabbis and other religious leaders, the president and prime minister and lawmakers.

The vandalism comes days after attacks on two synagogues in the central coastal city of Netanya. The Netan Ya Reform congregation was flooded on Saturday night when unknown vandals forced open a window and placed a hose through it with the water running.

The water was ankle deep throughout the building when it was discovered on Sunday, and had ruined prayer books, furniture and building infrastructure, according to the Jerusalem Post.

On Saturday night, prayer books were burned at the McDonald International Shul in Netanya, an Orthodox synagogue on McDonald St., and the words “Hail Satan” were painted on a wall.