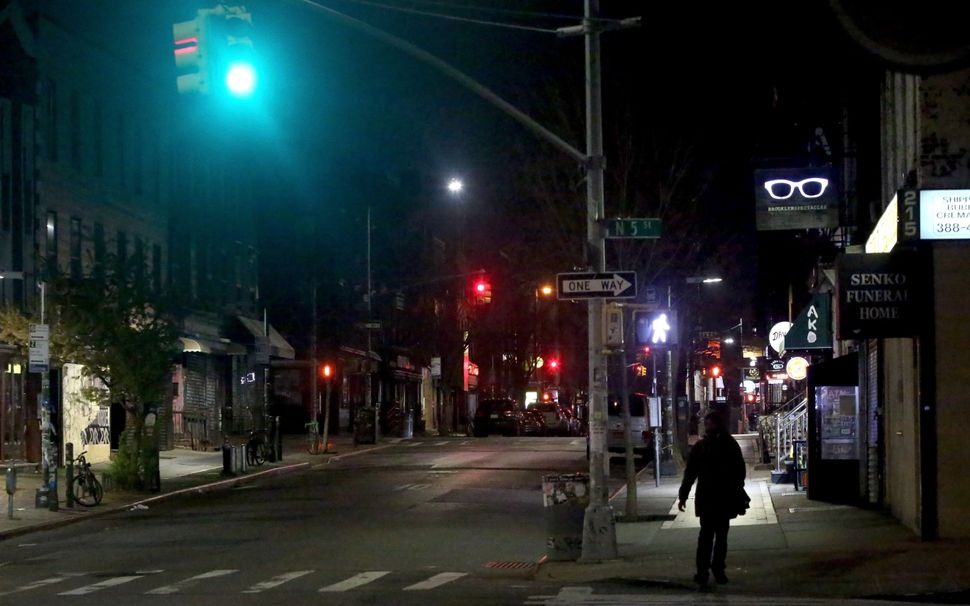 The streets are empty in the evening of April 4, 2020 in the Williamsburg neighborhood of the Brooklyn borough in New York City. Image by Yana Paskova/Getty Images

“As soon as we found out, we worked with community leaders and this particular school to immediately stop this reckless practice,” said the spokeswoman, Olivia Lapeyrolerie. She declined to name the school, but said it stemmed from an article the Forward published on Monday about schools continued to meet in Williamsburg’s Satmar Hasidic community.

The article quoted a parent who said he had children at multiple schools that were teaching classes in synagogues and classmates’ apartment buildings.

The parent, who spoke on the condition of anonymity, provided evidence in the form of correspondence with the school. His account was corroborated by another individual, who sent a screenshot of WhatsApp messages among Satmar parents about the secret yeshivas.

Lapeyrolerie said only one school had been broken up, and that it had been done in the form of a verbal warning. She said the city reserved the right to enforce the social distancing rules with people who are purposely “disobeying the law.”

New York is issuing $1,000 fines for people who don’t keep six feet from each other in public.

On Tuesday, a Haredi resident of Brooklyn said that he had received a robocall in Yiddish after the publication of the Forward article denying that yeshiva administrators had sanctioned the school meetings. The robocall was discussed in several Orthodox WhatsApp groups and on social media.

“We’re sending this out to let it be known that the policy of the schools is that no in-person gatherings in Cheders or other places are permitted,,” the message said, using the Yiddish term for elementary schools, according to a Haredi resident in Brooklyn who heard it, and spoke on the condition he not be named for fear of backlash from community leaders.

“Not organized by teachers, and not by the students themselves, not in an open space and not in any closed space,” it continued. “We understand how hard this is and look forward to when things will be back to normal and we can reopen our schools for everyone but for now our only option is to pray for the situation to improve and that this epidemic will die out.”

The Haredi community is characterized by strict control of every aspect of life by rabbinical authorities, including curriculum taught in yeshivas.

Lapeyrolerie said that the Mayor’s office is closely monitoring the situation, and that city officials believe that “a handful of teachers individually took it upon themselves” to teach the in-person program.