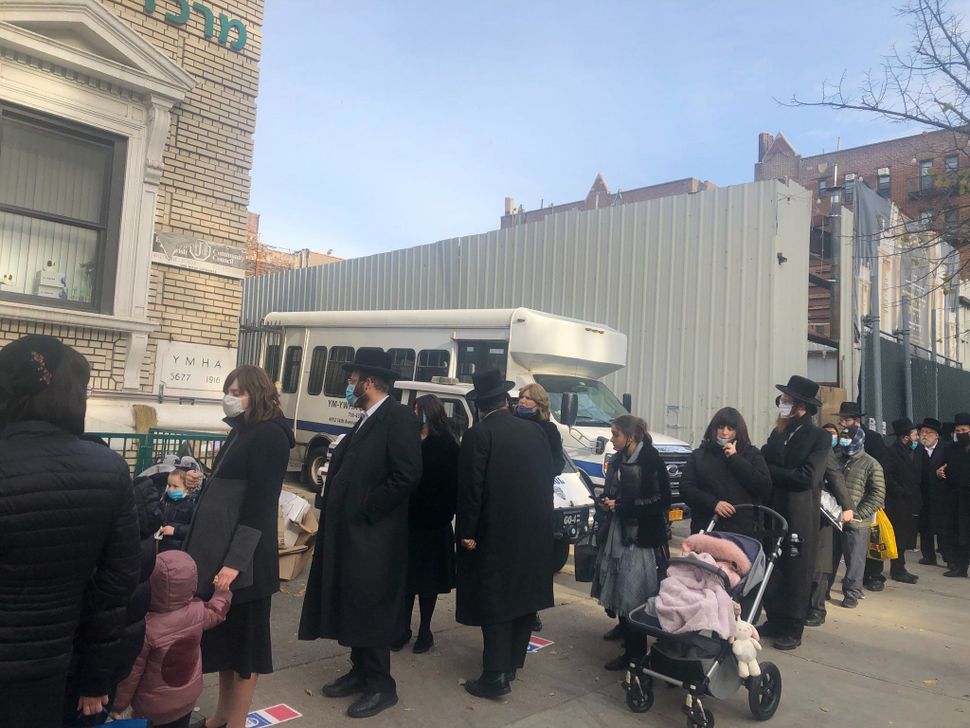 Voters line up in Borough Park. Image by Sally Goldenberg/POLITICO

On 18th Avenue, in the heart of Borough Park, the P.S. 192 building was wide open for voting — but by the afternoon, there were hardly any voters standing in line.

In a nearby cafe, a Haredi Israeli man stood next to the baked goods counter, asking locals about their voting preferences. “We have to get this crazy man out of the White House!” he exclaimed.

Within seconds, a group of yeshiva students gathered around him, and a debate broke out..

Yummy, a young Hasid who requested his last name not be used, said that he had escorted his friend to his first time at the polls that morning. “I wore a Trump mask, but it was okay, because here most people are for Trump, because you know, we are Jews.”

Shloimy, a Hasidic young man, said many young people in his circles have not voted this year. “But people should definitely vote, even in states like New York. It’s the best thing for democracy,” he said, adding, “Some people say it’s a mitzvah.” Shloimy himself said he did not vote.

“The outcome is scary if Trump doesn’t win,” said Shloimy. “I’m afraid of the Democratic party, the way they’re going too much to the left socially. I’m not saying Biden is socialist, but he might be overtaken by them.”

The mainstream media is “embarrassing”, he said. “I was listening to CNN the other night about these Trump caravans.” During the Black Lives Matter protests, he claimed, “You didn’t hear a word from CNN.”

Indeed, no storefronts are boarded up like in Manhattan— clothing stores are plastered with signs in English saying they are closed due to the neighborhood being a red zone. Some with handwritten Hebrew and Yiddish notes say they are open and ask customers to please use the back entrance.

And what if there’s violence in case of a Biden victory? “If the white supremacists come out, then the Democratic government of New York will shut it down,” Yossi said.

Outside, a white minivan drove by with a Trump banner draped across, playing music from a loudspeaker, with a Hasidic driver. Mothers pushing strollers paused to watch it drive by, men rushed by on their way to afternoon prayers. “Four more years!” the jingle sang. “Four more years for President Trump!”

“If Biden wins, we aren’t scared,” said Shloimy. “We will respect the results.”