The Politics of Rescue 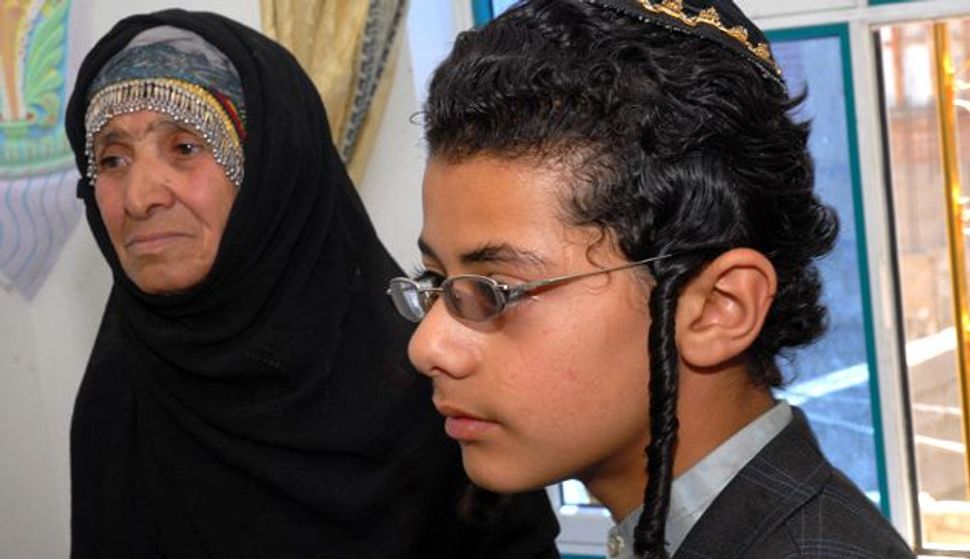 Fearful: The mother and son of Moshe al-Nahari mourn his murder in Raida, where many Jews live in fear but are reluctant to leave. Image by GETTY IMAGES

It was Maimonides who said that there is no greater religious duty than pidyon shevuyim, the redemption of captives, an injunction with deep biblical roots and plenty of historical illustrations. This obligation fueled the movement to free Soviet Jews and undergirds the contemporary Israeli impulse to strike lopsided deals and embark on military campaigns to redeem its soldiers. It’s the reason that Gilad Shalit has become a household name in Israel and beyond ever since the Israel Defense Forces soldier was abducted two and a half years ago.

So the plea to rescue Jews who are in distress in countries hostile to them resonates in an almost tribal way. Who among us wouldn’t want to save one’s sibling and, by extension, a member of the (very) extended family? That’s why it’s hard to criticize the basic motivation of the rather odd collection of Jewish organizations who are trying to rescue the remaining Jews in Yemen, a secret operation reported in this newspaper last week after an embargo on the story was broken by the Israeli press.

Rescue is a Jewish imperative. But this imperative should be pursued for the right reasons and in the right way. This operation may well fall short in important respects.

There is, first, a fundamental question about the imminence of the threat to the approximately 300 Jews still living in Yemen, a nation with a government friendly to the United States but facing militant Islamist sentiment domestically. After Moshe al-Nahari, a Yemeni Jewish communal leader, was murdered in December by a Muslim — described variously as an Islamic extremist or a mentally unstable neighbor — concern increased for the safety of the remaining Jews. The Jewish Agency for Israel, which has historically rescued Jews from troubled lands, had already evacuated one Yemeni family and was working to bring the rest to Israel. Meantime, an American coalition, including United Jewish Communities, the Hebrew Immigrant Aid Society and representatives of the Satmar Hasidic sect, was embarking on its own rescue effort, but with a different destination — most likely, the ultra-Orthodox stronghold of Monsey, N.Y.

The organizational rivalry led to leaks that blew the operation open in a fashion both irresponsible and, possibly, self-defeating.

If the situation is, indeed, as dire as it has been made out to be — “the entire Yemenite-Jewish community now lives in fear of Islamic extremists and persecution,” UJC warned — the rescue of the Jews should be paramount. Where they go afterwards is a secondary concern. Israelis obviously believe in the Zionist imperative to bring endangered Jews to Israel. American Jews might prefer that, but tend to endorse freedom of choice; to do otherwise would clash with our political values and the choices we have made ourselves. And the Satmars, virulently anti-Zionist, want Jews resettled only in closed communities that have little or nothing to do with the Jewish state.

The question of where Jews should go once they are rescued is a deep, philosophical dilemma that has dogged efforts to save those in danger as far back as the Holocaust. Should Zionism trump all? Or do humanistic values override the need to see Israel as the sole haven from oppression? What if families wish to be unified? What if individuals want to chose where they live? And what if that freedom of choice has been manipulated by years of propaganda?

Good questions, all. But the rescue comes first — followed by the recognition that sometimes redeeming captives involves some uncomfortable outcomes. Many Jews fleeing what was then the Soviet Union chose not to go to Israel; chose not to associate with Jewish religion, culture, or organizational life; chose not to fulfill the heroic image many activists nurtured. So be it. Choice demands tolerance.

There is another, troubling element to this story. As reported by the Forward’s Anthony Weiss, it’s not at all clear that the danger to the Yemeni Jews is as imminent and mortal as their would-be rescuers contend.

According to a report compiled by on-the-ground observers and written by a representative of UJA-Federation of New York and an official from the Israeli Foreign Ministry, the government of Yemen has said repeatedly that Jews are free to leave for a country of their choosing. Indeed, some have traveled to Israel to visit family, and have chosen to return to Yemen. The few hundred Jews remaining in Yemen have had numerous opportunities to emigrate since 1994, but they have decided to stay.

It is impossible from this vantage point to judge which depiction of the situation of Yemeni Jews most accurately fits their reality. But it is fair to question whether Jewish organizations should be involved in trying so hard to rescue Jews who may not want to be rescued. And it is fair to question whether the demand for secrecy wasn’t used as a way to evade accountability on the part of leadership to their members.

The Jews of Yemen have long been caught between competing interests, between those who want them in Israel and those who think they should be davening in New York. Surely, the duty of *pidyon shevuyim *ought to be elevated above this organizational and religious conflict. What’s needed now is a clear-eyed assessment of the situation on the ground, collaboration among agencies, open communication when prudent, and a renewed commitment to rescuing Jews who want and need to be helped.

The Politics of Rescue