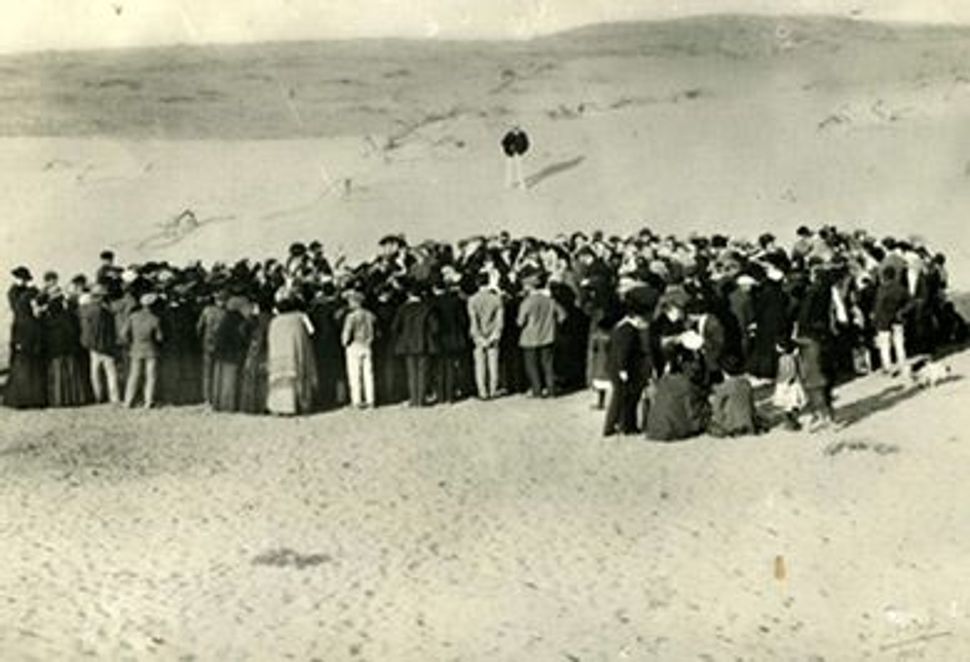 Then and Now: The city of Tel Aviv got its symbolic start on April 11, 1909, when a group of Jews gathered among the sand dunes north of Jaffa to draw lots for plots of land in what was planned to be a new Jewish neighborhood. Image by OFFICE OF THE SPOKESPERSON, TEL AVIV-YAFO MUNICIPALITY 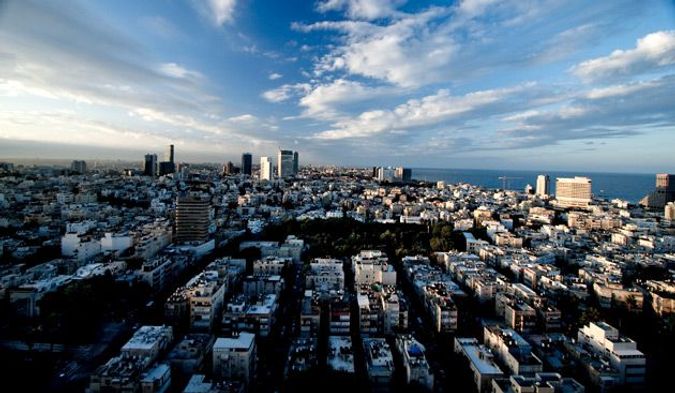 Every few weeks, gay Arab men from all over Israel gather for a party at a rented nightclub on Tel Aviv’s Herzl Street. The highlight of the evening is a drag show, with heavily made-up amateur performers dressed as sexy, pouting Arab pop stars. They are followed by Raafat, a performance artist from Jaffa, who lip-syncs old-fashioned Palestinian nationalist songs. Nearly all these men lead double lives; if they were to reveal their sexual orientation in their conservative communities, they would risk ostracism or even death. But in Tel Aviv they are free to celebrate their Palestinian, gay identity — at a club located on a street named after the founder of modern Zionism.

This scene probably wasn’t exactly what Tel Aviv’s founders had in mind when they envisioned the first Hebrew city. But when one recalls that their intention was to build a truly modern city, informed by the ideals of 19th-century European liberalism and of the Haskalah, the Jewish Enlightenment, it makes perfect sense. They laid the groundwork for the Middle East’s most forward-looking and culturally vibrant metropolis. 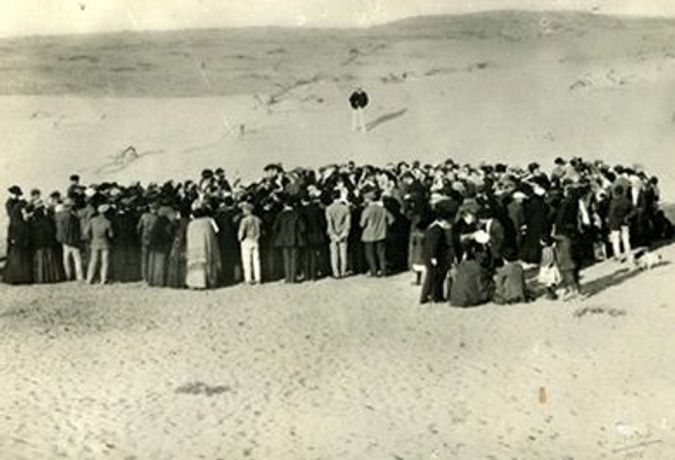 Then and Now: The city of Tel Aviv got its symbolic start on April 11, 1909, when a group of Jews gathered among the sand dunes north of Jaffa to draw lots for plots of land in what was planned to be a new Jewish neighborhood. Image by OFFICE OF THE SPOKESPERSON, TEL AVIV-YAFO MUNICIPALITY

A famous black-and-white photo, taken on a beach just north of Jaffa, is believed to show a group of Zionist pioneers in April of 1909 drawing lots for plots of land, on which they would build what was then intended to be a new Jewish neighborhood. They called it Achuzat Bayit, or “Homestead.” A few months later, the name was changed to Tel Aviv, or “Hill of Spring,” after the Hebrew title of Theodor Herzl’s seminal novel, “Altneuland.”

Thus began one of Zionism’s greatest success stories — a thriving, intensely vital city built from scratch in only a few decades. It became home to the first high school with a curriculum taught entirely in Modern Hebrew. All the Hebrew-language newspapers that dominate Israel’s contemporary media were founded in Tel Aviv, their offices today still in their original locations. Habima, the Hebrew theater started in Moscow, ultimately found its natural home in Tel Aviv. And let’s not forget the first casino with Hebrew-speaking croupiers, or the modern era’s first brothel with Hebrew-speaking prostitutes and clients.

The Zionist pioneers who founded Tel Aviv 100 years ago did not intend to create a New Jerusalem by the sea. Instead, they wanted to create a utopian environment for the New Jew — secular speakers of Modern Hebrew. The evidence of their utopianism can be seen all over the city — from the urban planning to the architecture to the vibrant avant garde culture that has flourished in Tel Aviv for most of its history.

Tel Aviv is the only city in the world that was designed entirely by Sir Patrick Geddes, the visionary Scottish urban planner whose philosophy was predicated on interactions between people, their environment and their activities. A decade after his plan was accepted by the city’s first mayor, Meir Dizengoff, the first wave of German-Jewish refugees arrived, urgently in need of housing. In response, architects trained in Le Corbusier’s International style designed and built what ultimately became the world’s first Bauhaus city — more than 4,000 low-rise, relentlessly geometric residential buildings. Unadorned except for curving balconies, they boasted airy apartments, designed to promote a lifestyle that was healthy and, above all, modern.

Today’s Tel Aviv throbs with a palpable creative and intellectual energy that reminds me of literary descriptions of Paris and Berlin during the 1920s. While café culture is dying a slow death in Europe, in Tel Aviv it is a decade into a renaissance that has come to define the city’s lifestyle. You can hardly walk three blocks anywhere in the city without coming across a café; and they’re always full, from early morning until late at night.

In this super-casual city everyone seems to know everyone else — if not directly then at least by one degree of separation — so there is much kissing on either cheek, in the French style, as friends and acquaintances greet one another, often joining an already existing group to discuss books, music, travel — anything but politics, which is a subject that lost its charm somewhere between the collapse of the Oslo accords and the umpteenth government corruption scandal. Peace and hope may no longer be part of Israel’s national vocabulary, but Tel Aviv proves that it is possible to live and experience joy even in their absence.

This joie de vivre has helped earn Tel Aviv one of its more popular nicknames: HaBuah, “the Bubble.” When intended as a compliment, it refers to a place that has managed to remain an island of sanity, creativity and political moderation in a sea of turmoil and extremism. Offered as an insult, it speaks to the accusation that Tel Aviv is the home of navel-gazers and bleeding-hearts who are disconnected from the often-brutal realities of the Middle East — or worse, indifferent to the suffering of their countrymen living in volatile border areas such as Sderot.

Interestingly, this accusation was made frequently even in 2002, when suicide bombers were regularly detonating themselves in Tel Aviv, while Sderot was relatively quiet. It also was leveled during the Second Lebanon War, when the army’s manpower chief said that a relatively small percentage of fallen soldiers came from Tel Aviv — indicating, he said, a lower level of patriotism amongst denizens of the Big Orange.

It came up again during the recent Gaza operation, when students at Sapir College in Sderot created a computer simulation of Tel Aviv under rocket attack and posted it on YouTube, so that Tel Aviv residents would “wake up” to the situation in the south of the country. Journalist Yair Lapid wrote an angry response, in which he pointed out that not only had Tel Aviv been under Iraqi missile attack for weeks during the 1991 Gulf War, but that more Tel Avivians died in a single 1995 terror attack than all those killed by Qassam rockets over the past four years. Not, he added, that this makes their blood any redder.

But simply comparing battle scars ignores Tel Aviv’s many other contributions to Israeli society. Every country needs a capital of culture. Without Tel Aviv, Israel’s soul would be greatly diminished. Israeli art, music, literature, journalism, cinema and theater, its intellectual ferment, fashion, great cuisine, pop culture and nightlife, even its high-tech industry — all the things the foreign ministry loves to boast about — are centered in Tel Aviv.

Tel Aviv even manages to seduce those who might seem predisposed to dislike an Israeli city. A Lebanese-European friend from a Muslim background, who travels frequently to Israel, described the city as a “big, warm, sexy hug.” An Egyptian friend, who was in the process of working through a lifetime of anti-Israel prejudice, told me, while we were drinking cappuccinos at a neighborhood café, that it was difficult for him to deal with how much he loved Tel Aviv. A Palestinian friend from Ramallah says that Tel Aviv is his favorite city because it represents everything the Middle East should aspire to be — liberal, tolerant, creative and open.

True, Tel Aviv has no great historical monuments or ancient ruins. To be perfectly honest, it is not, for the most part, a particularly beautiful city — unless you count the beach and the Mediterranean. As for traditional Jewish religious life, in general the synagogues tend to be neglected and sparsely attended, while non-kosher restaurants outnumber kosher eateries by far. Still, the language, the culture and the rhythm of life, which is kept by the Hebrew calendar, make this an unmistakably Jewish city.

Above all, Tel Aviv is a place where life is lived to its fullest, determinedly in the present — which is quite an accomplishment in a place violently divided by a conflict so firmly rooted in the past. Flipping through my books of black-and-white photos that document the building of the city, from swathes of sand to tree-lined boulevards, I can’t help but think that Tel Aviv’s pioneering founders would probably be quite satisfied with the contemporary interpretation of their utopian vision.

Lisa Goldman is the author of “City Guide: Tel Aviv” (Crossfields Publishing, 2006). She blogs at lisagoldman.net.