For Students, A Spiritual Journey Through the Wilderness 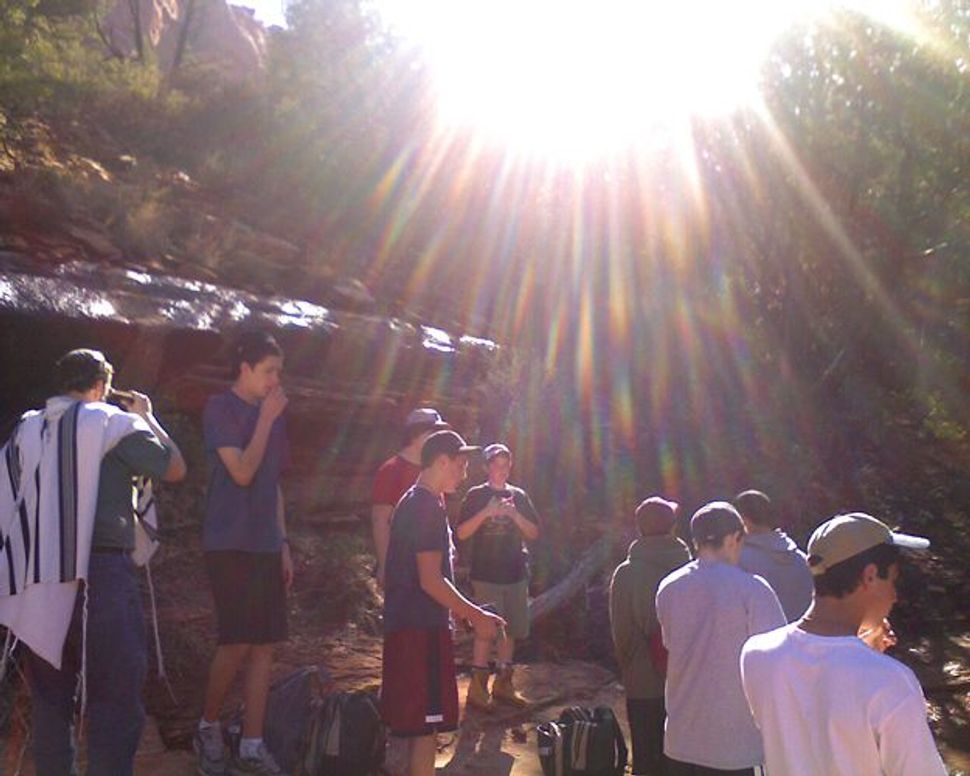 Nature?s Glory: Hikers stop for a moment of prayer.

Nearly two dozen teenagers looked out over the ravine at Bear Mountain in New York, pausing from their hike to take in the vista of treetops spreading out in front of them.

Their guide and group leader, Jordan Rosenberg, quieted the eighth graders so that they could say the traveler’s prayer*, t’filat haderech*, asking for a safe completion of their journey as they contemplated their steep descent into the valley below.

The moment, as recalled by Rosenberg, captures the two poles of religion according to the medieval Jewish philosopher Maimonides: feeling vulnerable and in awe at the same time.

For Rosenberg, a 28-year-old Orthodox rabbinical student, this is key to cultivating a connection to spirituality. The wilderness in particular, he explained, inspires these moments: “When you are within the created world, it helps you feel the Creator.”

Rosenberg employs moments like these and the wilderness as tools for building a spiritual identity in Jewish students who participate in his experiential educational program, Traveling on the Path.

While the Jewish community is peppered with environmental programs that combine ecology with Judaism, Rosenberg says that his program is unlike others in North America. Jewish ecology and nature programs, such as Hazon and Teva, “work to bring the environmental movement to Jews. What I do is a bit different. I’m using the wilderness as a channel to spirituality, identity and Jewish connections.”

Rosenberg is particularly concerned with inspiring a connection to spirituality in young Jews; Traveling on the Path works with students ranging in age from middle school through college. “I’m really focused on day school education and trying to impact it,” he explained. While day schools are often successful at teaching traditional subjects such as math and Judaic studies, many of these schools struggle to impart a sense of spirituality to their students.

“There are thousands and thousands of kids in day schools across America who are interested in cultivating a sense of spirituality and a connection to God,” Rosenberg said.

A graduate student at Yeshiva University, Rosenberg has been involved in wilderness programs and Jewish education for about 10 years. While an undergraduate at the University of Pennsylvania, he participated in, and later staffed, PennQuest, a wilderness orientation program for incoming freshmen. He also has hiked trails in a range of places, including California, Israel, and parts of Turkey’s Lycian Way.

Inspired by his experience at Penn and by the year he spent as a resident adviser in a yeshiva in Israel, Rosenberg started sketching out his idea for a program that would combine Jewish education with spirituality and the wilderness. He recalled that, when his idea coalesced into Traveling on the Path, “I was so excited about it — I couldn’t even sleep!” After graduating from Penn, he enrolled in the Rabbi Soloveitchik Institute Teaching Fellowship Program in Boston to train to become a Jewish educator.

In 2006, after teaching day school in Manhattan for two years at Yeshiva University High School for Boys, Rosen-berg began running Traveling on the Path programs and working as an educational consultant, helping schools run outdoor activities, like the Achdut (Hebrew for “unity”) trip for the Reuben Gittleman Hebrew Day School in Rockland County, N.Y., and a desert ecology trip for the Boston-based Gann Academy. To date, he has worked with four schools and a synagogue, running one-day outdoor programs and helping run trips up to a week long that involve hiking, team-building exercises, prayer and discussions of spirituality. And while at present the program is relatively small, the organization is applying for 501(c)(3) status. It has an advisory board and is seeking grants to make the program as affordable as possible for schools.

Rosenberg has built his program around a core of principles: “I see spirituality being connected in three ways: man to man, man to God and man to the world.” The three concepts work in tandem with one another in his programs. Students are shown the connection between helping each other through challenging parts of a hike and spirituality between themselves and their classmates.

Rosenberg also focuses on teaching conservation and respect for the outdoors, inventing games such as Garbage Heroes, in which students are rewarded for helping clean up hiking trails.

Rabbi Scott Bolton, head of school at Reuben Gittleman, enlisted Rosenberg to help run an outdoor program for his eighth graders, which follows up on a fourth grade trip to Teva and works into an overall school objective of teaching students to be Jewishly green. “I look for people who can connect our love and care of the earth and the big mission God has for the Jewish people, and I connect them with my kids,” he explained.

In his Traveling on the Path programs, Rosenberg places a particularly strong focus on the “man to God” segment, incorporating both traditional prayer and what he calls “spontaneous prayers of thanks.” Using the wilderness and awe of God as inspiration, the exercise allows students to praise God through personal prayer.

Traditional religious education is tied into the program, as well. Striving to create programs that weave into the schools’ curriculums organically, Rosenberg works closely with educators, often informally discussing Jewish teachings and the texts the students are studying in their classes.

The head of school at Yeshiva University High School for Boys, Rabbi Mark Gottlieb, has worked with Rosenberg repeatedly. According to Gottlieb, programs like Traveling on the Path, which take students out of the classroom and concentrate on spirituality, are particularly important for Modern Orthodox students. “In general they have a very narrow view of spirituality. Jordan really engaged our boys in activity, thought and contemplation,” he said. It was “something out of the box, and was a transformative experience for some of the students.”

For Students, A Spiritual Journey Through the Wilderness