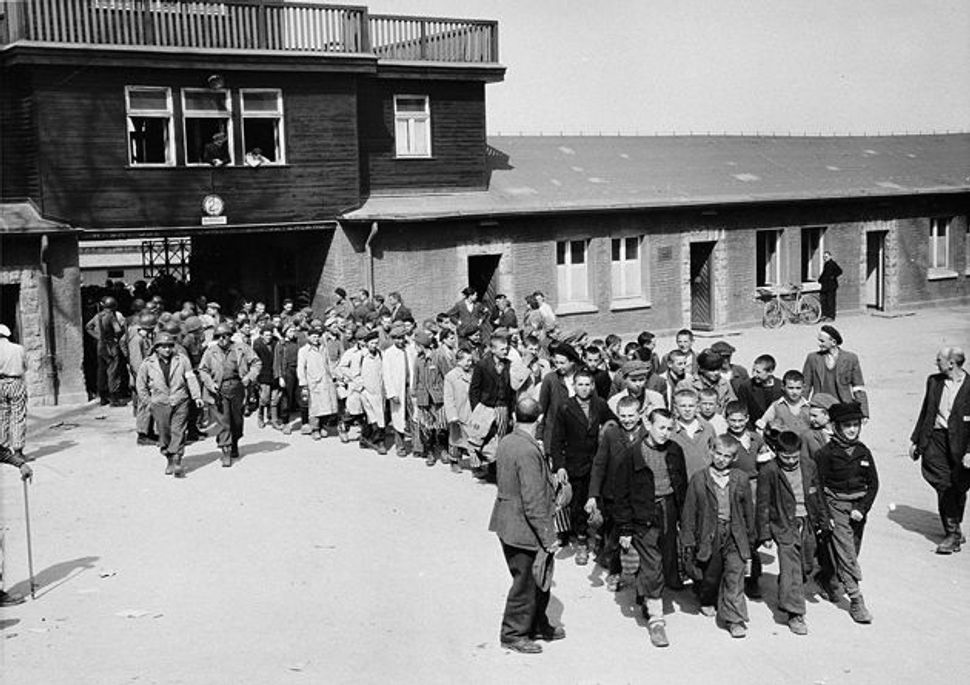 When President Obama visited Buchenwald, he connected the camp with the larger story of the Nazi destruction of the Jews. Accompanied by Buchenwald survivor and Nobel laureate Elie Wiesel, Obama laid a wreath at the camp memorial, honoring the memories of the 56,000 prisoners who died there.

But there is an additional dimension to the story of Buchenwald. This was highlighted in Obama’s presence by Volkhard Knigge, director of the Buchenwald museum. He noted the fact that veteran prisoners in the camp, amidst all the horror, sustained their humanity by protecting and saving hundreds of children in an organized effort. In a place of death, they chose to defend life — and to risk their own lives to protect the most vulnerable among them.

When elements of General George Patton’s U.S. Third Army liberated Buchenwald on April 11, 1945, American soldiers discovered 904 boys among the 21,000 male survivors. Today, these Buchenwald boys are in their 70s and early 80s, and they live around the world, with large concentrations in the United States, Israel, Canada, Australia, France and England. But for many years, despite the spectacle of their discovery at liberation, few people asked who they were or how they were still alive to be liberated.

Until recently, their story had been little known. But that is changing.

We now know that they were mostly Jewish children and youths from Poland, Czechoslovakia, Hungary, Romania and Lithuania, who were brought in 1944 and 1945 to Buchenwald, some with fathers or brothers, but the majority as orphans. Most were teenagers, but a sixth of them were 12 and under. The two youngest boys were each 4 years old. Some had been in German factory labor camps in Poland until mid or late 1944. Some had been in Auschwitz and its satellite camps and were taken to Buchenwald to toil in its sub-camps in 1944. Some had been evacuated from Auschwitz and its satellites in early 1945, arriving in bad shape in open coal cars in the frigid air.

How did they manage to survive? Documentary evidence in the Red Cross International Tracing Service archives as well as scores of memoirs and testimonies by and interviews with these men indicate that their lives were saved by elements of the German communist-led international underground in the camp, together with Polish Jewish prisoners who worked closely with the underground. Key activists in the Czech and Hungarian underground national committees at Buchenwald also played important roles.

Veteran prisoners committed to protecting the youths, drawing on the influence of the German communists and their allies in the internal camp self-administration. They did what they could to keep the boys from being sent to the outer sub-camps, where slave labor was a death sentence. They clustered them in children’s barracks under tight discipline and control to minimize their contact with SS guards. They used their influence to provide access to occasional additional food and to warm clothing. They used tough discipline to keep starving youths from scavenging freely in the camp or stealing food from one another. They distributed Red Cross packages sent to other prisoners to the children.

The veteran activists even created makeshift, clandestine schools in the barracks to control the boys and to lift their minds beyond the realities of everyday camp existence. (Mordechai Strigler, who went on to be the editor of the Yiddish Forverts, was a key teacher in this effort.) Finally, in the last days, when Nazi leaders sought to march first the Jewish prisoners and then all the remaining prisoners onto the roads, the prisoner activists changed the markings on the boys’ uniforms and interceded personally on their behalf. Many activists were with the boys until liberation and after. In several images taken on April 17, six days after the camp’s liberation, these men can be seen shepherding the boys through the camp gate to the recently abandoned SS barracks.

Among the boys was little “Lulek,” Israel Meir Lau, an 8-year-old from Piotrkow, Poland, who was protected in block 8 along with several hundred other youths. He later became chief rabbi of Israel and today chairs Yad Vashem in Jerusalem. And, of course, among the older boys was Eliezer Wiesel, a 16-year-old from Sighet, Romania, who was in block 66 with hundreds of boys being looked after by the adults.

As the Allied armies advanced from the west and the east, those in the camp who acted to protect the boys clung to hope and were determined to do what they could to ensure that the youths would survive. The boys represented hope — symbols of resilience and resistance to Nazi oppression. They represented the future.

Not all the youths made it — some boys who could not be protected perished in the outer camps, and a few hundred were led out by the Nazis in the last days. But, thanks to the determination and bravery of some veteran prisoners, one of the great rescue efforts of the Holocaust occurred inside a concentration camp.

Kenneth Waltzer is a professor of history and director of the Jewish studies program at Michigan State University. He is currently completing a book about the rescue of children at Buchenwald.