Who Is an Israeli? 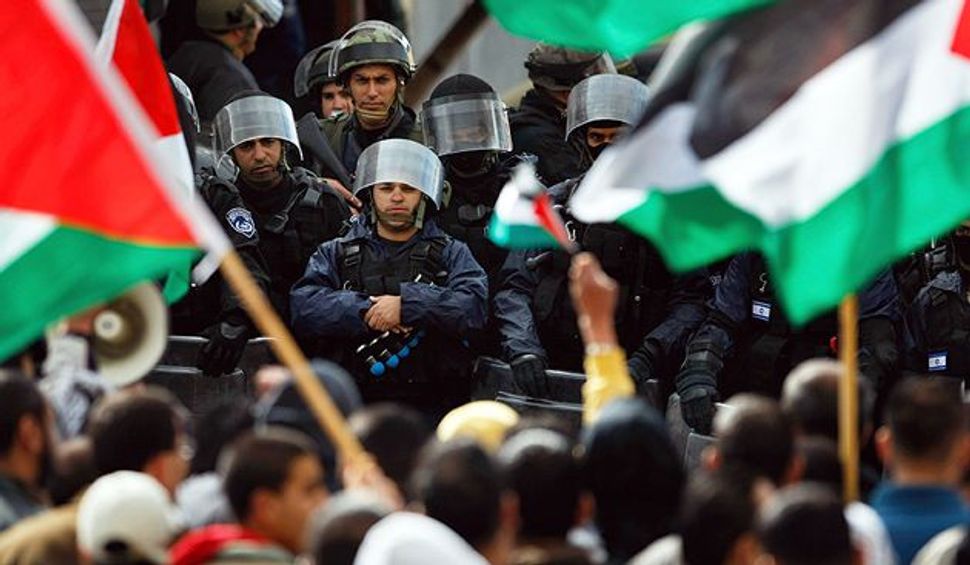 House Divided: Israeli Arabs faced off against police in Umm al-Fahm in March during a march by right-wing Jews through the Muslim town. Image by GETTY IMAGES

The “Who Is A Jew?” question has long been with us, often quite acrimoniously. In Israel, the debate has immediate legal implications. In America, too, the question arises frequently, whether in Jewish population surveys, in responses to the offspring of intermarried Jews or even in discussions of Jewish identity.

At first blush, the question “Who is an Israeli?” seems much simpler. In our time, “Jew” is a category outside any legal framework. But “Israeli”? Israel is a nation-state, and being an Israeli must surely be entirely a matter of law: An Israeli is a citizen of the State of Israel.

I very much doubt there has been a single day since I was 11 years old when I did not, in one connection or another, think of Israel. I write just now from a kibbutz in the Valley of Jezreel, where I am staying during part of this, my 60th or so visit to the country. I have lived here, taught here, loved here. Israel is profoundly important to me. But I am not an Israeli, not at all. A Palestinian resident of Umm al-Fahm who knows nothing of Theodor Herzl or the Balfour Declaration, who has never read a word of Amos Oz or saluted the Israeli flag, is more Israeli than I.

More Israeli than I? Yes: I am zero Israeli; he or she, being a citizen of this country, is 100% Israeli. Israeliness is not a matter of temperament or feelings of identity, however profound they may be. It is a legal category from beginning to end.

When the Israel Philharmonic Orchestra came on its first post-independence tour of the United States, it performed in Constitution Hall in Washington, D.C. My family was there, and I shall never forget the thrill of the concert’s opening, “Hatikvah” played not as a song of yearning, focus on the cellos, but as a song of pride, hear the brass. And all of us, of course, standing. Standing very tall. Nor does that peak experience stand alone; there have been dozens more. Yet for whatever the mix of reasons, I hold only one passport, and it is mine as an American, and though that hypothetical Palestinian I’ve mentioned may well never have sung “Hatikvah,” may find the song offensive, he is Israeli, not I.

Some days ago, Aharon Barak, retired chief justice of Israel’s Supreme Court, called on Israel to be simultaneously a Jewish state and a state of all its citizens. But he gave no instructions on how to square that circle. And it may not be the right circle to square.

In America, we have been saying for quite a while that “our diversity is our strength.” That is what all of us are taught, that is what many of us believe, and that is what some of us directly experience. In Israel, there is no way around the fact that, for now, its diversity is its weakness. Israelis haven’t a clue as to how to think about, let alone deal with, their society’s diversity — and, most specifically, with the 20% of their society’s members and their state’s citizens who are Palestinians. Shall a Palestinian child be taught that he may one day grow up to be prime minister of the nation? Foreign minister? Minister of justice, or of internal security, and so on and so forth?

And what is the ideal? Is it total integration, really a state of all its citizens — or is it communal self-expression, a Palestinian culture and a Jewish culture living side-by-side, each under its own vine and fig tree? Does Israel’s being a Jewish state mean that Jews are inevitably privileged, Palestinians consigned to second-class citizenship? If so, does that not mean that Israel cannot be a genuine democracy?

No one here, neither Palestinian nor Jew, seeks an ethnic-blind, community-of-origin blind society. Quite the contrary. And, more to the point, if the Jews of Israel want the fact of their Jewishness acknowledged — say, for example, reflected in the curricula of the school system, or in their effective control of the state budget — then surely the Palestinians of Israel are entitled to similar recognition, and more than merely bits and pieces of power over their own forms of self-expression.

We speak of people — as individuals and as a community — whose place in the shadows must, if Israel is to keep its promise as a Jewish state, become a place in the sun.

Who Is an Israeli?