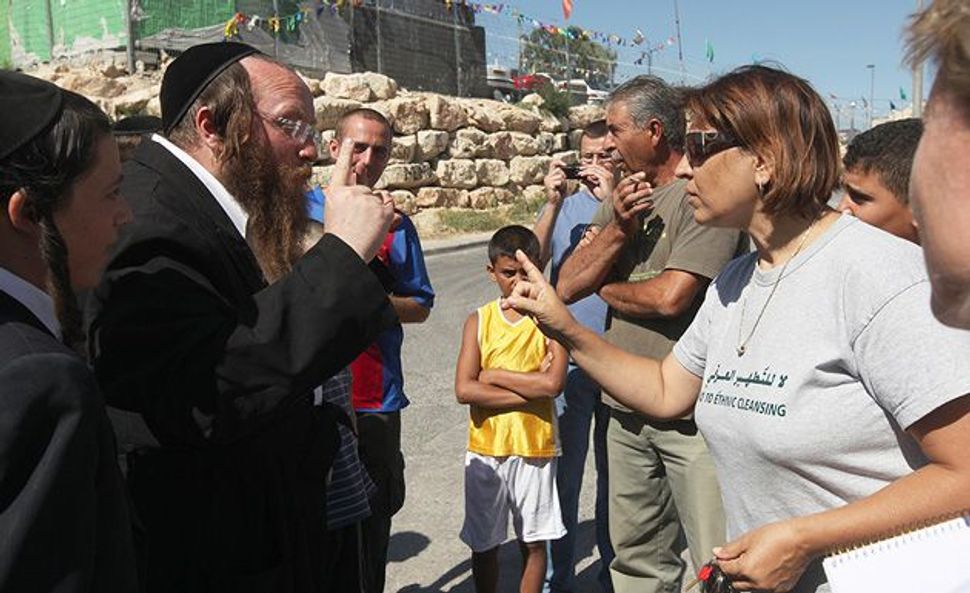 Whose Home?: A Palestinian protester, wearing a T-shirt saying ?No to Ethnic Cleansing,? confronts a Jewish man outside a disputed building in East Jerusalem. Image by GETTY IMAGES

Mike Huckabee recently made a virulently anti-Zionist remark — and the Jews who accompanied him on his tour of East Jerusalem cheered.

“It concerns me when there are some in the United States who would want to tell Israel that it cannot allow people to live in their own country, wherever they want,” declared the once and future Republican presidential candidate and current Fox News pundit. The statement came after he visited a Jewish settlement, Shimon Ha-Tzaddik, in the middle of the Arab neighborhood of Sheikh Jarrah.

For years, Israeli settler organizations have been moving Jewish families into Jerusalem’s Arab neighborhoods, most prominently in Sheikh Jarrah, Ras al-Amud and Silwan. In many cases, the organizations have been buying up Arab property, often in legally questionable ways. In others, they have asserted claims to houses that Jews once owned, but which were occupied by Palestinian families after Israel’s War of Independence left East Jerusalem under Jordanian rule.

The latest hotspot in Sheikh Jarrah is of this second kind. Last May, two Palestinian families were handed eviction orders. The orders resulted from Israeli court rulings that affirmed the Jewish title to their properties, and which voided the tenancy rights of the Palestinian families. Jewish families then entered the houses.

When the Obama administration objected last month that the action sabotaged the peace process, Prime Minister Benjamin Netanyahu declared that “united Jerusalem is the capital of the Jewish people and of the State of Israel. Our sovereignty cannot be challenged.” Therefore, Netanyahu said, Jews are free to purchase homes anywhere in the city — and, presumably, are thus free to move into Jewish-owned homes in East Jerusalem.

But it’s not that simple. I live in a West Jerusalem neighborhood called Baka. “Baka,” which means “valley” in Arabic, was the name given to the neighborhood by the middle-class Palestinian Arabs who were its original inhabitants. Nearly all of Baka’s Arabs left during the hostilities of 1948. Under the provisions of Israel’s Absentees’ Property Law, these homes became state property. The new Jewish state used these homes to house Jews who had become refugees as a result of the war, among them former inhabitants of the Jewish Quarter of the Old City and immigrants from the Islamic world.

Israeli courts have ruled, as they must, according to the letter of the law. The Sheikh Jarrah homes are indeed owned by Jews, while the Palestinians who once owned homes in Baka and other West Jerusalem neighborhoods no longer, under Israeli law, have title to those homes.

But the law is clearly asymmetric — it asserts Jewish claims and negates Palestinian ones on both sides of the city. In West Jerusalem, the state asserts, in essence, that the 1948 war voided prior claims. But it simultaneously asserts that, in East Jerusalem, pre-1948 property rights trump subsequent changes in occupancy, changes that resulted from population movements during and after the War of Independence.

The continuing assertion of pre-1948 Jewish claims to property in East Jerusalem (and the rest of the West Bank) is profoundly anti-Zionist. If the basis for property claims is status quo ante that preceded Jewish political independence, then Palestinians will campaign for the return of their former West Jerusalem homes, as Faisal Husseini, the late Palestinian leader in Jerusalem, explicitly warned in 1995 in response to similar attempts to claim Jewish property in East Jerusalem. If the Jews claim a right of return to their property, the Palestinians will claim a right of return to theirs.

But the War of Independence and the birth of the Jewish state created a fundamentally new situation and, as Israeli leaders have long argued, we cannot simply turn back the clock. That’s why Israelis — including the majority of us who support an equitable accommodation with the Palestinians — firmly reject the Palestinian claim to a right of return to their former homes, neighborhoods and villages in Israel.

Allowing Jews to settle in Sheikh Jarrah is the first step along the road to the end of the Jewish state and the transformation of the Jews, once again, into an embattled and persecuted minority under foreign rule. True Zionists should oppose these settlers.