Bringing Our Labor Legacy to Life 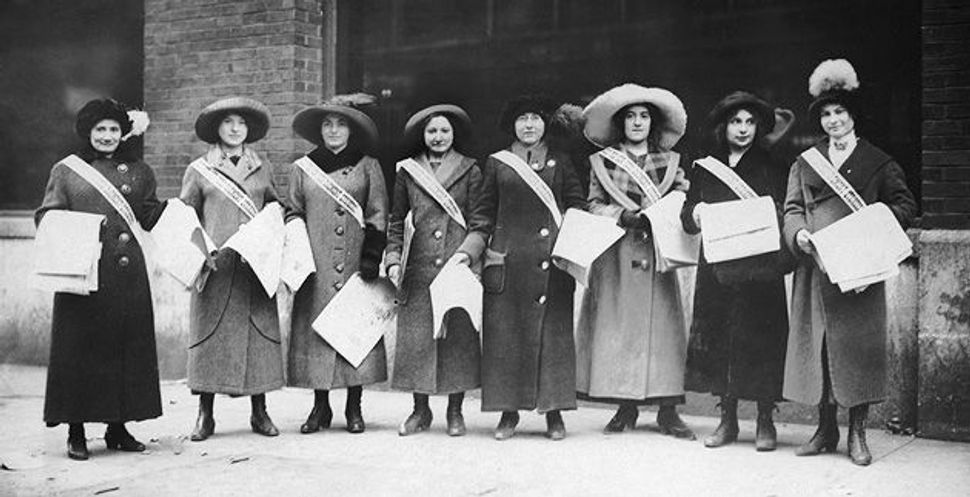 On November 22, 1909, thousands of shirtwaist workers gathered at Cooper Union’s Great Hall on the Lower East Side. The workers were mostly girls in their teens and early 20s, the bulk of them Eastern European Jewish immigrants. They had convened to discuss how to address the inhumane conditions they faced in their factories.

Before an audience that included Jewish luminaries like Samuel Gompers, head of the American Federation of Labor, and Meyer London, the neighborhood’s socialist member of Congress, a young worker by the name of Clara Lemlich rose to have her say. Surrounded by dignitaries, this demure immigrant made a big difference in the history of the American labor movement. Addressing the gathering in Yiddish, she boldly called for an industry-wide strike. The audience roared its approval. The meeting’s chair asked the crowd to “take the old Jewish oath.” The assembled responded: “If I turn traitor to the cause I now pledge, may this hand wither from the arm I now raise.”

Within days, 20,000 workers were on strike. The “Uprising of the Twenty Thousand,” as it came to be called, lasted until February 1910. It eventually concluded with a “protocol of peace” with the shirtwaist manufacturers, who agreed to institute better working conditions, higher wages and shorter hours. The strike was also a pivotal moment for American trade unionism, marking the emergence of the International Ladies’ Garment Workers’ Union as a powerful national force for workers’ rights.

Today, a century later, garment and textile workers are fast disappearing from American shores. But the legacy of Jewish trade unionism lives on.

Volumes have been written about the heroic role played by both famous and faceless Jewish men and women in the American labor movement, people who spent decades marching on picket lines, fighting for decent pay and conditions, against child labor, for fair labor laws — and for the basic right of working people to organize. Jews were prominent in pressing for legislation that brought a guaranteed minimum wage, an eight-hour workday and unemployment compensation.

As much as Jews gave to the labor movement, however, they also gained from it. As the garment unions grew, they created a form of social unionism unmatched by anything in our country’s history. The garment unions built housing for workers and their families, provided health clinics for workers and their children, and offered wide-ranging cultural and educational opportunities ranging from simple English language classes to classical concerts and lectures on topics of intellectual interest. These unions helped give our working-class, immigrant forebears the economic and social foundation upon which they and their descendants built the prosperous and secure Jewish community of today.

My own engagement with the garment unions began in 1987, when I became director of communications for the Amalgamated Clothing and Textile Workers Union, the week Jack Sheinkman took over as its president. Jack was raised in the union-owned Amalgamated Houses in the Bronx and was a product of the Workmen’s Circle, the social democratic fraternal organization. He never let a speech go by without tossing in a phrase from Hillel or Isaiah, along with a quote from American socialist leader Eugene V. Debs.

I introduced Jack to someone I used to call my “secular rabbi,” the literary scholar and political eminence Irving Howe, whose “World of Our Fathers” is the bible of Lower East Side Jewish history. I can recall more than one occasion sitting with them in a restaurant near the union’s office as they conversed in Yiddish. I — a product of a non-ideological, materially oriented suburban Jewish upbringing — would marvel at the Jewish America they represented, filled with a fierce authenticity that was, even then, receding into history.

As we mark another Labor Day, our community faces a challenge: How do we remember and honor the legacy of Jewish trade unionism?

Jewish tradition teaches that after a family member dies, we should name a member of the next generation in his or her memory, so that the deceased lives on in the lives of loved ones. Memory is no good if it is not living memory.

To remember these ideas, to act on them, is to be faithful to the memory of our grandparents and great-grandparents, who left the oppression of the Pale, came to America and struggled for their rights as working people. We must make these authentic American Jewish heroes live again, in our hearts, in our minds and in our actions.

Jo-Ann Mort is CEO of ChangeCommunications. She was formerly director of communications for the Amalgamated Clothing and Textile Workers Union and its successor, the Union of Needletrades, Industrial, and Textile Employees.

Bringing Our Labor Legacy to Life