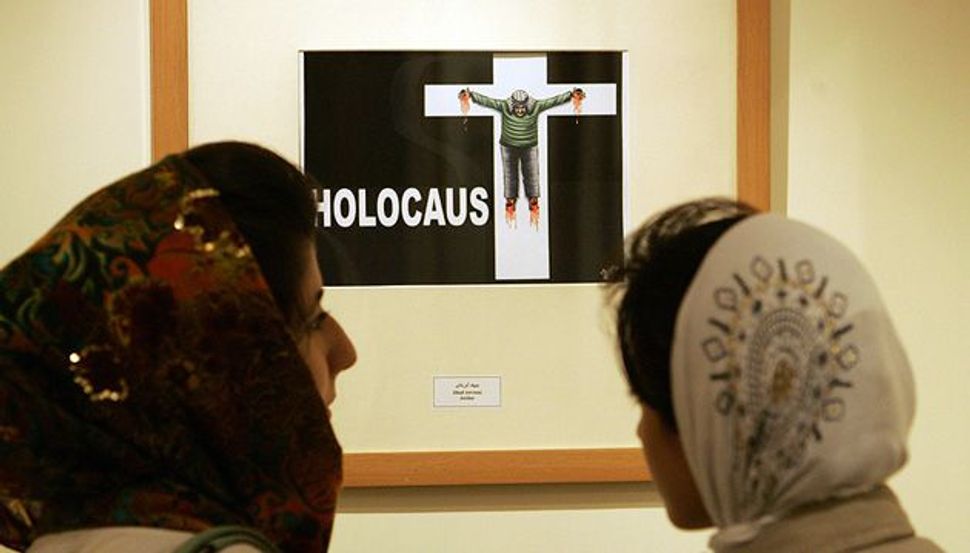 New Lows: A cartoon of an Arab man crucified on a cross marked ?Holocaust? is displayed in a 2006 Holocaust cartoon exhibtion in Tehran. Image by GETTY IMAGES

On December 14, 2005, President Mahmoud Ahmadinejad became the first senior Iranian official to deny the Holocaust. “They have created a myth today that they call the massacre of Jews and they consider it a principle above God, religions and the prophets,” he said in the city of Zahedan.

Until that date, leaders of the Islamic Republic had focused their hostility on Israel and Zionism but had steered clear of Holocaust denial and direct attacks on Judaism. In the decades preceding the 1979 Islamic Revolution, Ayatollah Ruhollah Khomeini did sometimes use antisemitic rhetoric. But after his return to Iran, he declared that Jews should be protected. This position was consistent with the traditional Islamic view of Jews as “people of the book.”

Many answers have been offered to explain Ahmadinejad’s more overtly antagonistic posture. Some believe he wishes to be viewed in the Muslim world as a hero who is not frightened to take on Israel and its supporters on any ideological battlefield. Others believe that he actually wants to increase Iran’s international isolation, because doing so would allow him to crack down hard on the opposition. Still others believe he wants to show up the double standards of the West, where criticism of Islam is allowed under the principle of freedom of speech yet Holocaust denial is taboo and in some countries forbidden under law.

More recently, there have even been suggestions that Ahmadinejad’s Holocaust denial reflects an attempt to overcompensate for what is alleged to be his own Jewish background. This theory is rooted in a ridiculous report that appeared earlier this month in Britain’s Daily Telegraph claiming that Ahmadinejad’s family — citing as evidence its original surname, Sabourjian — was Jewish. In fact, there is no reason to believe that Ahmadinejad is of Jewish ancestry, or even that the surname in question is particularly Jewish.

Instead of these tactical and psychological explanations, perhaps we should look to the realm of philosophy for an explanation of Ahmadinejad’s antisemitic rhetoric.

The Iranian president comes from a cadre of messianic revolutionaries who were influenced by the teachings of an Iranian philosopher by the name of Ahmad Fardid. Born in 1909 in the city of Yazd in central Iran and educated in Europe, Fardid was an admirer of Martin Heidegger, the renowned German philosopher who was a leading intellectual supporter of Hiter’s National Socialist ideology.

After the revolution, Iran’s Islamic radicals were looking for secular philosophies in which to ground their hostility toward the West and their Shiite messianism. In Fardid and his teachings some found what they were looking for.

Fardid believed that ideas such as human rights, tolerance and Western democracy are decadent. He also believed that all international organizations are conspirators against Iran. An antisemite, he saw the “hand of Zionists” controlling foreign governments and nongovernmental organizations. The use of violence to achieve political goals was, in Fardid’s opinion, absolutely permissible.

Fardid offered support for the revolutionaries’ calls for a system of Velayat-e Faqih (or guardianship by Islamic jurist), under which Iran’s “supreme leader” is seen as God’s representative to all Shiites. This concept dovetailed with Fardid’s belief in the importance of a strong leader, or, as Heidegger would have put it, a “Führer.”

This vision of violent, total revolution sweeping away the old Western-aligned order appealed to the messianic instincts of Ahmadinejad and his comrades. Although Fardid died in 1994, his ideology is still very much alive among hardline messianic circles within Iran. According to Mehdi Khalaji, a leading Iran expert at the Washington Institute for Near East Policy, Fardid’s admirers include former heads of Iran’s secret service.

When it comes to Jews, we see two varying approaches among Fardid’s admirers. While Ahmadinejad may have broken new ground by denying the Holocaust, he has not attacked Judaism as a religion. Others, however, do go further. For instance, Mohammad Ali Ramin, Ahmadinejad’s former senior adviser and the organizer of the 2006 Tehran Holocaust denial conference has called Jews “filthy creatures” and blamed them for causing disasters such as SARS and AIDS.

Ahmadinejad’s own antisemitism is of a piece with his larger apocalyptic vision, influenced by Fardid, that has as its culmination the return of the Shiite messiah, the Mahdi. In this vision, the Mahdi’s return would rid the world of all “corrupt” governments and ideologies, such as Zionism. As Ahmadinejad awaits the return of the Mahdi, the rest of the world waits anxiously to see whether Iran will acquire nuclear weapons and how closely Iran’s supreme leader, Ayatollah Ali Khameini, will identify with his president’s messianic visions.

Meir Javedanfar is the co-author, with Yossi Melman, of “The Nuclear Sphinx of Tehran: Mahmoud Ahmadinejad and the State of Iran” (Basic Books, 2007).