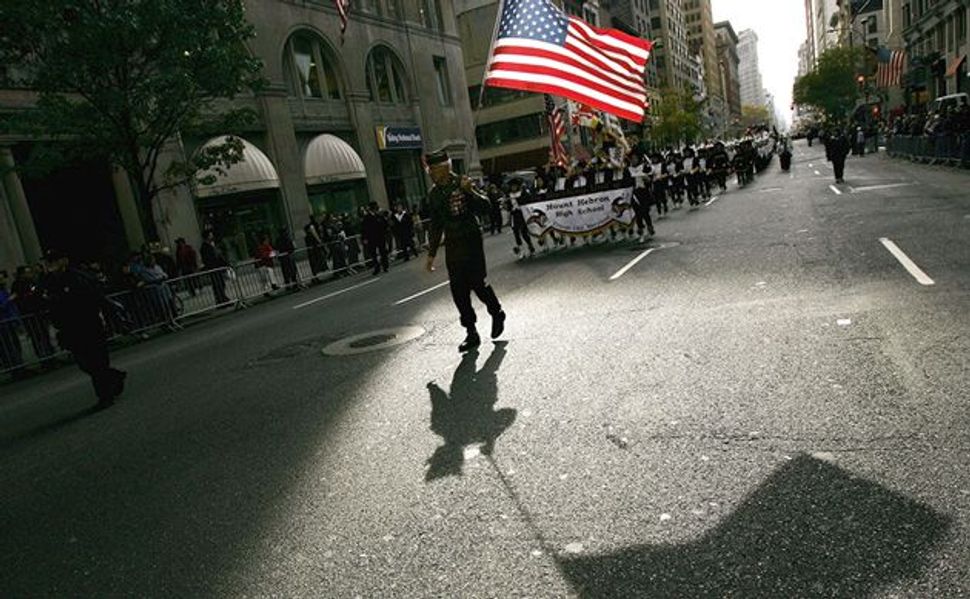 Each year, as Veterans’ Day comes around, there are fewer and fewer Jewish veterans to observe it. Unfortunately, this does not reflect a peaceful age without wars. Rather, it stems from a dramatic decline in Jewish military service in the United States in the past half-century.

Not that long ago, however, Jewish veterans were a dominant force in American Jewish life. They occupied positions of leadership, they filled the ranks of volunteers in Jewish organizations and they transformed the character of the Jewish community.

During World War II, more than a half-million Jews served in the American military. Almost every Jewish family had a brother, son, husband, uncle or cousin in uniform. Entering the armed forces, often as teenagers, these Jewish servicemen sometimes left home with little more than a nominal sense of what it meant to be Jewish. Their experiences in the armed forces taught them not only how to handle a weapon and to fight, but also how to be American Jews.

Many non-Jewish soldiers and sailors met their first Jew in the military. Stereotypes abounded. Some Jewish soldiers reported being asked about their “horns” by their fellow servicemen.

Jerome Minkow graduated from high school in the Bronx on January 30, 1945 and entered the army on January 31. When he reached basic training at Camp Blanding down South he couldn’t understand how he could be such an oddity for his fellow GIs. One of them even asked him to sign a piece of paper to show the folks back home what a Jew’s signature looked like. Minkow was flabbergasted, and stunned by the animus that surrounded him. He regularly found himself in fights. Eventually Minkow earned respect in the boxing ring.

Jews returned to civilian life unwilling to accept discrimination as a fact of life and willing to take risks to eliminate this stain from the fabric of American society. In December 1945, after the Army returned the Miami Beach hotels it had requisitioned during the war to their proprietors, Burnett Roth and 16 of his fellow Jewish veterans donned their uniforms and made the rounds trying to persuade hotel and rooming-house owners to remove offensive signs advertising “Restricted Clientele,” and “No Jews Wanted.” They followed their persuasion with politics, getting the City Council to pass an ordinance to prohibit discriminatory advertising. Gradually, veterans built a new agenda for the American Jewish community that emphasized the importance of changing the United States, making it a more just society.

At the same time, they fought for a Jewish state. In July 1946 more than 4,000 Jewish veterans rallied in Washington to advocate for the admission of 100,000 Jewish displaced persons to Palestine. The Jewish War Veterans even promised President Truman that they would recruit a full division of Jewish volunteers for service in Palestine to help keep the peace.

Before World War II, neither the cause of Zionism nor that of civil rights enrolled more than small numbers of American Jews. After the war, both achieved new prominence on the Jewish agenda as veterans increasingly set priorities for the Jewish community.

Military service empowered Jewish men; they learned how to fight to defend themselves, their fellow soldiers, their country and their people. No one, they felt, could impugn their patriotism, even when that patriotism demanded recognition of injustices in American society and commitment to rectify them.

Then came Vietnam, a very different war. Many young Jews, born after World War II, decided that they didn’t want to fight in a war that made no sense to them. A few became conscientious objectors. Many more took advantage of deferments, going to college, teaching public school or marrying and having a child.

In 1973, due in no small part to the protests against the Vietnam War in which many young Jews had participated, the federal government ended conscription and moved to an all-volunteer army. Like members of many other relatively affluent demographic groups, young American Jews have since largely chosen to pursue higher educations and civilian careers over military service.

Today, even with two wars going on, many segments of American society are distant from the experience of our nation’s veterans. That’s why honoring their service and sacrifice requires affirmative efforts. The Jewish community, especially, should recognize not only our Jewish veterans’ wartime service but also how they remade their world, the one they bequeathed to future generations. Their struggle to make America a more just society offers us a model worthy of emulation.