Newly Discovered Tunnel May Once Have Carried Dead Sea Scrolls 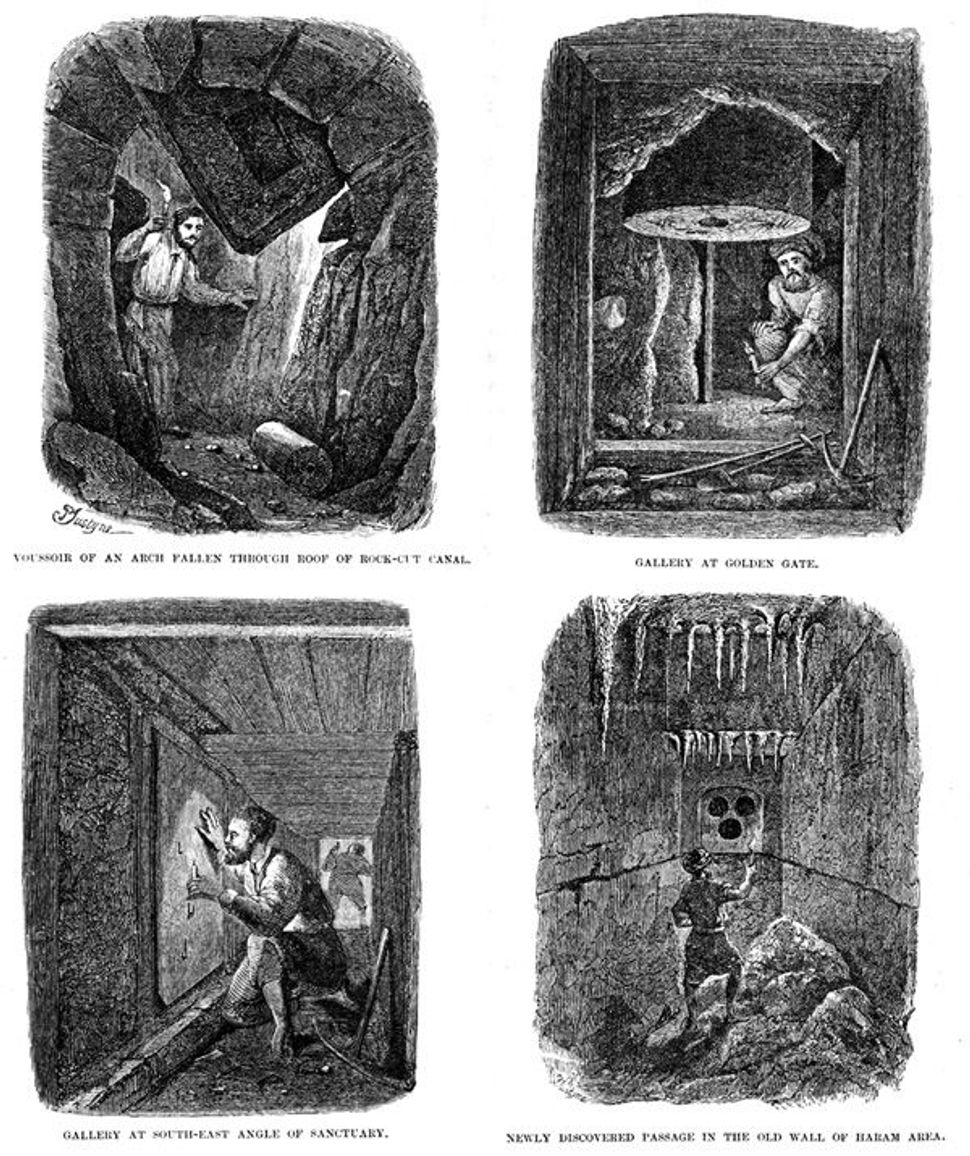 Accounts released last month of a newly discovered Jerusalem tunnel state that the passage was the very one used by those fleeing Jerusalem during the siege of 70 C.E., as described by Josephus. However, Josephus identifies not one tunnel but an elaborate network of them. That said, this most recent discovery, and others like it, have served to support Josephus’s underlying version of events.

Reports have described the discovery, by a team led by Ronny Reich and Eli Shukron, of an “escape hatch” or “drainage tunnel” under the main street of ancient Jerusalem. The archaeologists featured in the report are to be congratulated for their underground discovery, as are those news writers responsible for calling it to the public’s attention.

A September 9 Associated Press report, upon which most subsequent news accounts have been based, specifies that, two weeks earlier, archaeologists discovered the tunnel while searching for the city’s main road. Shukron is quoted as saying that workmen engaged in the search “happened upon a small drainage channel that led to the discovery of the massive tunnel.” The same report states that “the walls of the tunnel … reach a height of 10 feet in some places,” and a photograph of the site would appear to confirm that, while not necessarily 10 feet high throughout, it was high enough to accommodate many people in an upright position.

According to the large group of stories based on the AP report, “Archaeologists think the tunnel leads to the Kidron River, which empties into the Dead Sea.”

The Nahal (or Wadi) Qidron does indeed lead eastward to the sea, but about halfway toward that body of water it bifurcates, the one main branch, under the same name, continuing east-southeast to the sea — while the other bends slightly northward and, bearing the name of Nahal (or Wadi) Qumran, leads to Khirbet Qumran and was the main source feeding the large water-reservoirs that distinguish this site. The report of the Israel Antiquities Authority, focusing on the items found in the tunnel, states: “pottery shards … and coins from the end of the Second Temple period, prior to the destruction of Jerusalem by the Romans in … 70 C.E., were discovered in the channel.”

The archaeologists are quoted, in the same group of reports and others, as saying: “According to Josephus, the historian who recorded the siege, occupation and destruction of Jerusalem, people found refuge in the drain until they managed to escape through the city’s southern gate.” Further clarifying this interpretation, Reich is described as estimating that the tunnel stretched northward “from the Shiloah [Siloam] Pool at Jerusalem’s southern end to … the Temple Mount.” Most of the reports have an additional observation, by Shukron, to the effect that the tunnel “was a place where people hid and fled from burning, destroyed Jerusalem.”

While no statement in Josephus’s “The Jewish War” describes a specific tunnel or refuge, leading to the Siloam pool, by which refugees were able to flee Jerusalem at the time of the Roman siege of 70 C.E., Josephus does indeed refer several times in his “Jewish War” to underground passages used by them for this purpose.

Putting the various statements of the archaeologists and of Josephus together, we have the following picture:

The archaeologists have discovered a Jerusalem tunnel that could accommodate many individuals and which led, at the least, from the Temple Mount to the Siloam Pool situated in the southern extremity of the ancient city. The pool, in turn, led directly to the Nahal Qidron, which, as the news reports indicate, led eastward down to the Dead Sea.

While no description in Josephus’s “Jewish War” actually makes mention of a particular locus, he does indeed state that various inhabitants of Jerusalem hid in the city’s underground passages (plural), and at one point he describes an important group of rebels whom he calls “the tyrants” as having secured temporary refuge in “the ravine below Siloam,” by which he undoubtedly means the opening gorges of the Nahal Qidron. It is thus a fair inference or assumption on the part of the archaeologists that the tunnel they uncovered was one of those used by Jerusalem’s inhabitants to hide and flee from the Romans. However, if we follow Josephus, not only one but several escape routes could be and were used by the refugees. No available indications appear to confirm the archaeologists’ suggestion that the drain-tunnel discovered by them is a particular one uniquely referred to by Josephus.

Tunnels of this type, moreover, were discovered by explorers of Jerusalem’s past in the 19th-century; see particularly the accounts given by Charles Warren in his 1876 “Underground Jerusalem” and the four illustrations reproduced in reduced form below: 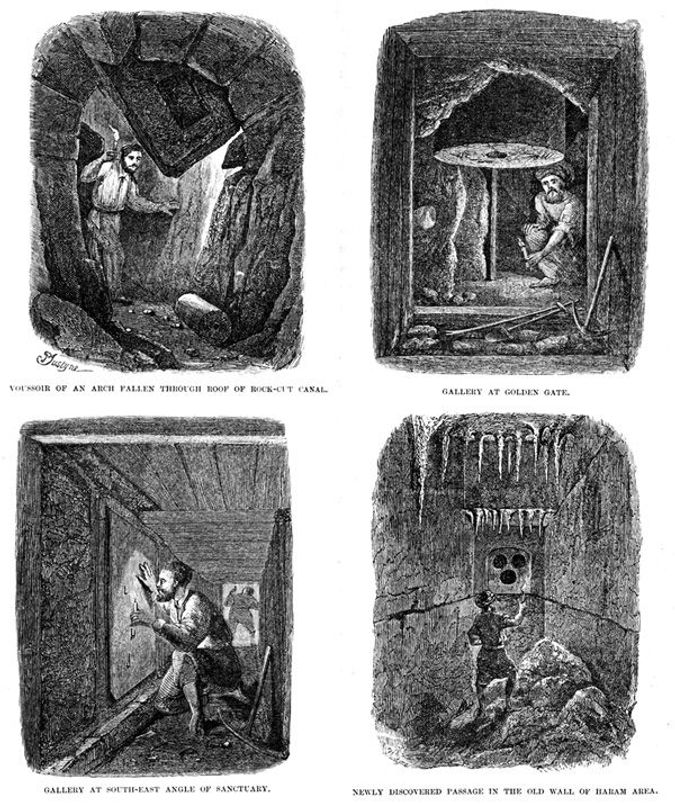 Warren’s findings, together with the discovery of Reich and Shukron described in the recent news reports, fully support Josephus’s statements relating to the tunnels beneath Jerusalem and the use to which they were put during the Roman siege of 70 A.D. These underground passages enabled many inhabitants of Jerusalem to exit the city and flee both south to Masada and, via Nahal Qidron and other wadis heading from Jerusalem eastward toward the Dead Sea, to the Machaerus fort lying just east of that sea, which was actually closer to Jerusalem than was Masada. (Josephus describes the large number of refugees who gathered at Machaerus.)

The circumstances as now known leave little doubt that, quite likely beginning even before the siege had begun, groups engaged in hiding the Temple treasures, the books and other items listed in the Copper Scroll — as well as those ancient writings of the Palestinian Jews known as the Dead Sea Scrolls, which were found centuries later in caves near the wadis leading out of Jerusalem.

Norman Golb is the Ludwig Rosenberger Professor of Jewish History and Civilization at the University of Chicago and the author of “Who Wrote the Dead Sea Scrolls?” (Simon & Schuster, 1995).

Newly Discovered Tunnel May Once Have Carried Dead Sea Scrolls